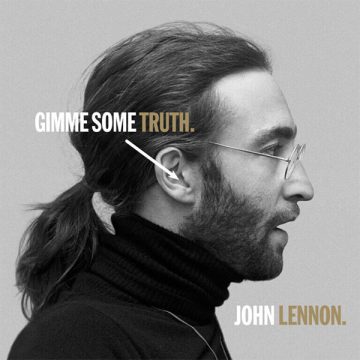 Today, October 9, 2020, John Lennon would have turned 80, and perhaps the best way to celebrate his birthday is to release a retrospective of his music. Gimme Some Truth. The Ultimate Mixes, is a welcome addition to the current catalogue of compilations of his music. This is an excellent collection of his work, well-thought-out and very beautifully packaged.

This release bears the same title as an older box set released in 2010,  and should not be confused with it. This is an all-new collection, featuring all-new mixes of classic John Lennon songs, handpicked by Sean Ono Lennon and Yoko Ono. They are referred to as ‘Ultimate Mixes’, meaning that they have been remixed, which may be a divisive issue for fans here.

All but two of Lennon’s solo singles are included in the set. One could argue as to what should and shouldn’t be included, but it is surprising that “Mother” is not part of the collection.  It is important to keep in mind that this is not a ‘Greatest Hits Collection’ but rather a compilation of the ‘best of’ John Lennon’s solo work. There are no rarities here, no previously unreleased music.

There is no arguing about the quality of the songs. All of them have aged extremely well and are not only classics, but part of our collective DNA. It seems the idea behind the album is to make his music even more contemporary with the new mixes. Secondly, it seems set up to introduce deeper cuts. The big hits will attract newer fans, and then expose them to deeper album cuts. It may encourage listeners to go back to the original albums on which the songs originally appear.

The biggies are here, including “Imagine”, “Give Peace A Chance”, “Instant Karma”,and “(Just Like) Starting Over”, and they have all been updated with new mixes. To be honest, they do not sound all that different, there are subtle changes, but the tracks here stick to the original arrangements. Basically, the new mixes seem to bring the vocals forward, and tinker with the overall backing track. In most cases it works, in some cases, such as on “Mind Games”, there are significant changes which may not be for the best. In the case of “Mind Games”, I prefer the original mix, as there is a great deal more going on that kind of gets buried in the mix. Elsewhere, some of the best aspects are brought forward, as with “Gimme Some Truth”, where the guitar sounds clean and clear and less cluttered in the mix. It sounds fantastic.

Of interest is the packaging of the album. The photos included here are wonderful and some have never been seen before. This is part of its charm. Visually, it is one of the best compilations I have ever seen.

This is an amazing collection, which would be a wonderful Christmas present for some new and eager fans. Lennon’s songs continue to age well, and seem to be attracting newer and younger fans. It is a nice summation of Lennon’s career. Fans and collectors should be aware that there are multiple versions of the compilation available.