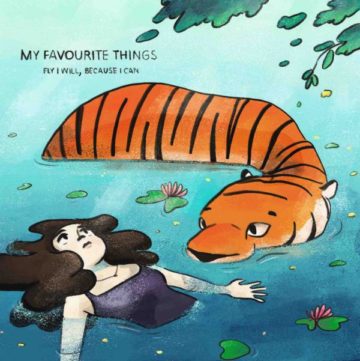 My Favourite Things
Fly I Will, Because I Can
Independent

You really have to be a bit cheeky to name your band My Favourite Things. This was one of the main themes from the Mary Poppins move which became one of signature John Coltrane tunes upon which he did numerous genial space/spiritual jazz improvisations. Listening to the My Favourite Things third album (the first two came out in 2009 and 2013, respectively) Fly I Will, Because I Can (with the Mary Poppins umbrella, maybe?) you get the impression that they actually had both, the movie and John Coltrane in mind. The brilliant Uma Sharma cover confirms it in a way.

This album turns out to be quite a striking mood piece. Some reviewers compare the band singer/composer Dorothea Tacher’s voice to that of the male/female vocal interplay of My Bloody Valentine, but personally, her husky, hushed tones remind me more of a combination of Elysian Field’s Jennifer Charles and Hope Sandoval. And like all the mentioned artists, on Fly I Will, Because I Can Tachler and her Brooklyn bandmates come up with some exquisite late night/early morning music that is quite a joy to listen to. Actually, you might try it any time of the day. It will work. Particularly if daydreaming is your thing.

Where My Favourite Things excels is creating ambiance with the use of very little or almost no electronics. It is all Tachler’s voice, synthesizers, guitars, harps, vibes, anything that will create a mood that slowly takes you along to exactly the places the band want to take you to. Even when suddenly, close to the end of the album the pace suddenly picks up (A Little Closer) it doesn’t jar or detract from the atmosphere the band creates, but just gives you an additional aspect of the dreamlike state they have created. Maybe that tiger on the cover was getting a bit too close to the girl, so time to fly away, I guess “On the shore I shall walk/Until tomorrow comes/Two Steps up, one back down/Ocean waves wash me up/A little bit closer” – A Little Closer). Oh, and that is about the only track on the album where their sound actually gets close to the one of My Bloody Valentine.

But MBV appear there only as a reference, not something My Favourite Things are trying to copy or just emulate. They’re just letting us know where they are coming from. In essence, on this album they were able to shape quite a specific sound of their own and a record that you will (or at least, I will) look for in those late, after midnight hours.

Here's what we think...
Spill Rating
Fan Rating
Rate Here
New Criteria
10
8.6
8.0
Total Spill Rating
8.6
Total Fan Rating
You have rated this
Album Reviews
a little closeralbum reviewsfly i will because i canmy favourite things
a little closer, album reviews, fly i will because i can, my favourite things
About the Author
Ljubinko Zivkovic