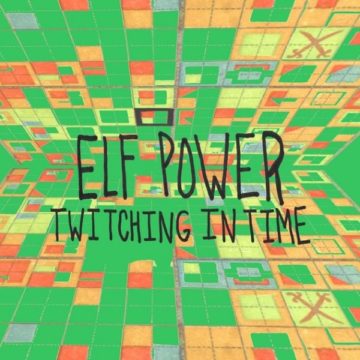 Whatever happened to the Elephant 6 Collective that practically ruled the indie rock scene (some even added a then popular sub-label ‘college rock’) in the second part of the Nineties? Some relatively better known names like Neutral Milk Hotel, Olivia Tremor Control, and Apples in Stereo are known do be gone separate ways, some are simply missing in action like Beulah or The Marbles, some are lingering around (just saw that Essex Green have something new out), while only Of Montreal seemed to be holding on. And then, her come Elf Power, one of the best of that bunch with a new album, Twitching In Time.

It is not that the band have actually completely gone away, they seemed to be mostly circling around the former Elephant 6 base of Athens, Georgia, but it seems that the stem that was driving the collective in its heyday has gone, and has pushed them out of the focus of their fans. And Elf Power did have a fanbase for a good reason since they were one of the more inventive parts of the collective, and have consistently been coming up with excellent albums. Is this thirteenth in line going to be the lucky one for them?

The straight answer is probably not. That has nothing to do with the quality of the music they have come up with this time around, but with the fact that no matter how good it is (and it is excellent), but that they didn’t really introduce any radical changes into their music. So far, no matter how good that music was and is, wider recognition seems to slip by them. Hope I’m wrong, because this album ranks among their best (actually, quite a hard choice).

Andrew Rieger’s voice didn’t lose any of the haunting quality it had from the beginning and his lyrics are still intricate puzzles to be solved. The music was, and still is, a varied combination of various forms of psychedelia, post-punk and what not. Usually you got a whole gamut of sounds, from screeching feedback to gentle acoustics. It worked before, and it works now. For example the opening “Halloween Out Walking” is a prime example of all of the above. You want something more up tempo? Fine, you’ve got “Ten Dollars on the Ground”, or maybe some country-tinged stuff —  “The Cat Trapped in the Wall” will cover that nicely.

Actually, there’s not a single track here that will let your attention drift somewhere, while you search for musical nuances and flip the dictionary to make sure you understand what Rieger wanted to say. Give this band another chance.

Formerly a lot of things, including a journalist and a translator, currently a freelance writer living in The Netherlands.
RELATED ARTICLES
album reviewself power
8.0