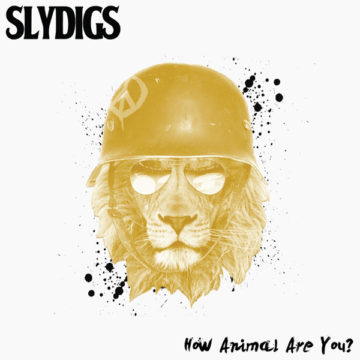 Slydigs
How Animal Are You?
Estupendo Records

On May 12th, UK’s Slydigs dropped their latest EP How Animal Are You?, which is full of rock busting beats, fantastic solos, and raw vocals, among other things.

Proving that good old rock and roll is alive and well, Slydigs have already been creating a buzz all over the world. Formed in 2015 by long time friends Dean Fairhurst, Louis Menguy, Pete Fleming, and Ben Breslin, the Slydigs are just wrapping their EP promo tour which took them to cities such as London, Edinburgh, and Amsterdam. Last year, the band toured with legendary rockers The Who in North America and Europe.

How Animal Are You? is perhaps one of the most surprising EPs of 2017. The first note of the opening title track draws you in, and when you make it to the end of the final song “The Kids Feel Underrated” you feel like you’ve been privy to something special, some hidden gem that’s just waiting for the right moment to be revealed.

The title track begins with a great workup, an intro that is interesting but not startling. It’s pretty clear, even from the first song, that the Slydigs are out to create great music, not to shock listeners or to rudely demand their attention. Instead, the band is able to woo audiences with their undeniable talents.

Then there is the rhythm and blues inspired “The Truth Be Found” which is seductively simple. Slydigs really demonstrate in this song that they aren’t confined to the more popular rock and roll elements, but that they can draw on sounds and melodies more fundamental to the genre.

Their variation of rock and roll also sounds removed from time, in that they seem to fluctuate which era of rock influences their music. Some songs bring to mind the protest songs of the 60s, whereas others have a more modern rock flare. For rock lovers, this means that Slydigs are kind of a dream come true.

And just when you think that you’ve figured Slydigs out, the final track of the EP totally throws any preconceptions about the band out the window. “The Kids Feel Underrated” is a very heartfelt and soulful ballad, ripe with raw emotion. The brief piano intro really helps establish the mood of the track and the vocals really amplify the overall feeling of the piece.

Compared to The Rolling Stones, Oasis, The Kinks, and The Black Keys, Slydigs is a band destined to be a household name. Music lovers, do yourself a favour and check out Slydigs’ latest EP How Animal Are You?

Here's what we think...
Spill Rating
Fan Rating
Rate Here
New Criteria
10
10
9.0
Total Spill Rating
10
Total Fan Rating
You have rated this
Album Reviews
album reviewsestupendo recordsgive it up brotherhow animal are youslydigsthe truth be found
album reviews, estupendo records, give it up brother, how animal are you, slydigs, the truth be found
About the Author
Samantha Stevens

Samantha “Sam” Stevens is half a music journalist, and half an academic scholar. With a graduate diploma and MA in Journalism, Sam has covered musicians all over the world and her work has appeared in Guitar Girl magazine, North Bay Nugget newspaper, The Link newspaper, and a few others. She even founded and managed her own music blog The Littlest Voice for 5 years, in which the spotlight was thrown on new and emerging indie artists around the globe. Currently, Sam is a PhD student at Carleton University in the School of Indigenous and Canadian studies where she is continuing her MA research on colonial language in Canadian news and government institutions.
RELATED ARTICLES
album reviews
9.0