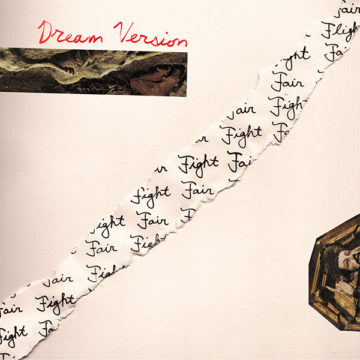 Punk is vague. It has always been vague. Ideologically, some punks are full-fledged antiestablishmentarians that veer into anarchism, while some are simply mad at “Big Pharma” and the American war machine. Others still are merely aware of society’s issues and wish to initiate some form of change. Dream Version has recognized these inconsistencies and found a way to embrace the subculture’s idiosyncrasies.

Dream Version’s cerebral rock first gained recognition with their 2014 debut, Beginners. On their sophomore album, they delve further into life’s intrinsic flaws by exploring adult life, modern society and their own idleness in the face of injustices. The opening track, “I Wanna Be Angry,” is a great introduction to the motivation and sound of the album. It’s a chugging garage-rock tune that expresses the voice of an angered youth. Deeper into the album the lead single, “Warriors of the Old World,” comments on everything from internet commenters to equality, and even the faults of previous generations. It is one of the albums most politically charged and approachable songs as it offers both poignant lyrics and a couple of catchy riffs

Alec Jensen, the band’s frontman and songwriter has previously admitted to his privileged point-of-view and has described his perspective as a guilty Protestant addressing the evil in himself while trying to “understand and even love evil people.” This perspective has an undeniable effect upon his lyrics as many songs such as “Fight Fair,” ”I’m Still as Spoiled as the Day I Was Born,” and “Bathwater” feature religious imagery and references to his seemingly normal Chicago origins. Jensen’s position of observing flaws within the world but having “a cocktail of poisonous psychological ingredients” that prevent him from taking any action is noticeable through the critical yet passive tone that is prevalent throughout most of the album.

The tenth and final song on the album, “Everybody’s Protest Song,” is one of my favourites on the album. This is mainly due to the phrase “John Mayer-looking buttholes” which is surprisingly descriptive and fits nicely with the often tongue-in-cheek tone of Fight Fair.

Jensen’s interesting lyrics are probably the most notable feature of Dream Version. Jensen, guitarist/keyboardist Eric Brummitt, and drummer Michael Kunik create a soundscape that is reminiscent of many garage rock, grunge, and post-punk bands. They continue to cite The Kinks as an inspiration but that isn’t clearly audible through their use of distorted guitars, electric pianos, and occasional synths. Jensens’ vocals often sound eerily alike The Mountain Goats’ John Darnielle’s as they both express their sardonic lyrics with similar inflections. Dream Version’s sound is usually a consistent wash of rock but things get ethereal near the end of the album as the synthesizer driven track “Shame” features choral-esque vocals and slowly uttered introspective lyrics.

With Fight Fair, Dream Version have continued their descent into introspection and mildly angry suburban punk. Featuring both wry witty lyrics and familiar sounding instrumentals, Fight Fair is an album that attempts to be both thought-provoking and accessible.

I am an Edmonton based musicophile and photographer who loves experiencing music whether it's live or on my turntable. I play seven instruments and go to a lot of concerts.
RELATED ARTICLES
album reviewsshame
8.0