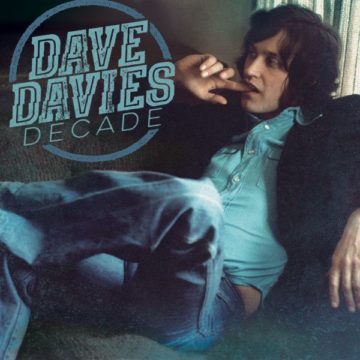 As a solo artist, Dave Davies is one of the most prolific artists of all time. Much like George Harrison, who happened to be in a band with a famous songwriting duo, Davies was in a band with his brother who dominated The Kinks albums. So it is no wonder that Davies accumulated a backlog of songs. Sure he got one or two per album, but Decade is evidence that not only was he constantly writing, but also recording. After he released four brilliant singles from 1967 to 1969, Davies seemed to put his solo career on the back burner, not even completing his album he started in 1968 (the songs eventually came out on various complications and even Kinks B-sides, but if you are interested in this album, check out Hidden Treasures, 2011). Decade represents songs that Davies was working on from 1970 until the release of his first official solo album, AFL1-3603 (known as Dave Davies in the U.K. as the title was the American RCA catalogue number). The songs were reportedly found and salvaged by Davies sons, Simon and Martin, and I must say they have done an excellent job with these tapes. To be clear, these songs are not rough demos of songs from AFL1-3603, but previously unreleased gems.

While Ray Davies was focusing on concept albums and ‘rock operas’, Dave was apparently focusing on the individual song. Many of these songs would have made excellent singles (“Give You All My Love” comes to mind) and others would not be out of place on Kinks albums throughout the 1970’s, Dave has crafted each song beautifully. Give the instrumentals (“The Journey” and “Shadows”) a listen. These songs are near perfect and “Shadows” would have been nice on the Misfits  album (1978),  but The Kinks loss is Dave Davies’s gain as it sounds brilliant on this album.

The songs are straight ahead rock songs, ranging from hard rock to pop and all stops in between. Dave has a distinct writing style and he is able to elevate a rocking blues song to a whole new level, as in “Mystic Woman”. Let’s face it, he is one of the greatest rock guitarists of all time, so the songs are full of awesome guitar work from Mr. Davies.

I am truly glad his sons found these songs, and I am even more happy that Davies decided to craft an album out of these songs.For songs recorded years apart, there is remarkable consistency and cohesiveness to the album. And although it is of its time, it still sounds current and fresh.

Fans should be lining up for this album. Davies has put together a remarkably strong album, one that will sit nicely alongside Hidden Treasures, which was mainly his 1960’s material. Now is a good time to reevaluate this artist. He has released some fine solo albums and the time is right to appreciate his work. Decade is a stunning album, and for the uninitiated a pretty good place to start the examination of this brilliant artist.

Born and raised in Whitby, Aaron discovered music through his love of The Beatles. This led to a career in radio, writing for various publications, and ultimately a radio show about The Beatles (Beatles Universe), which ran for over four years. When not immersed in music, Aaron enjoys spending time with the loves of his life -- his wife Andrea, and daughters Emily and Linda (all of whom have an intense love of music too).
RELATED ARTICLES
album reviewalbum reviewsdave davies
7.0