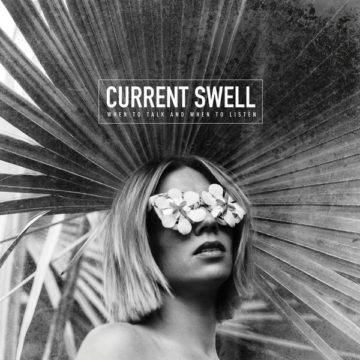 Current Swell
When To Talk And When To Listen
Nettwerk

Current Swells’ latest release, When To Talk And When To Listen, can be summed up simply with the famous Marlon Brando quote from 1954’s On the Waterfront: “I coulda had class, I coulda been a contender, I coulda been somebody”.  The Swells have long been a band with potential that needed to pick a path.  Whether keeping down the reggae route which they touched on in their 2009 single “Young and Able,” or continuing down the blues road which they started on the 2014 single “Rollin’,” they only needed to choose a direction and stay the course.  Instead, the band chose to suck any flavor out of their music and let sugary pop-rock rot their sound. There is nothing of consequence on this album, nothing to help discern it from anything else on the radio, and little weight to any of the lyrics. When to Talk and When to Listen is difficult to listen to and those who have enjoyed Current Swells music in the past will particularly struggle in surviving a single play through.

Listeners looking for a substantial lyric on When To Talk And When To Listen, will wind up pulling their hair out. The line “I thought you were different / I thought you were cool,” from their single “It Ain’t Right” is particularly damaging to the ear drums when it’s delivered void of any vitality. The production does nothing to help the poetry. The effects on the vocals on the opening track “Marsha” are so overdone it could make the most plastic of pop stars cry. Each song reads and sounds like a Lumineers B-side and the only sense of hope stems from the changes in velocity on the track “Woman In White”. However with hackneyed lyrics like, “She drank warm liquor and cold coffee / and she loved dancing like a lunatic in the rain,” clumsily draped over the music, any flicker of hope is quickly put out.

One of the biggest issues with When To Talk And When To Listen, is that it cannot be suggested to fans of any genre. Sure, people have varied tastes in music and typically songs this poppy can be recommended to simple radio listeners, but that is not the case here. Current Swell has managed to suck out the smidgen of soul which existed in the Lumineers and Of Monsters and Men sound by removing the façade of authenticity those bands keep. The guitar sound, bass sound, drum sound, song structure, and melodies can all be described as a generic brand, which is painfully ironic for fans of Current Swells past work.

When To Talk And When To Listen, is the “F” grade on the report card of a steady “B” student. Its failure is amplified by a history of success and a sense of potential. Fans of the band will want to like this record and struggle to do so. However, the pop rock industry has a history of taking music like that which can be found on When To Talk And When To Listen and cramming it down radio listeners throats until they can’t help but like it .We can only hope that the music business machine eats it up, gets Current Swell some air time, and makes them a lot of money so they can go back to the drawing board and start making good music again.

Here's what we think...
Spill Rating
Fan Rating
Rate Here
New Criteria
10
159.8
2.0
Total Spill Rating
159.8
Total Fan Rating
7 ratings
You have rated this
Album Reviews
album reviewscurrent swellnettwerkwhen to talk and when to listen
album reviews, current swell, nettwerk, when to talk and when to listen
About the Author
Dan Shust

The Spill Magazine is a Toronto-based online publication dedicated to covering the independent music scene with a strong focus on our thriving hometown talent. Our writers bring you up-to-date news, in-depth features on musicians and reviews for the latest CD releases. We also travel to the front lines for all local festivals including Canadian Music Week and North by Northeast. Don’t forget to check out our Facebook and Twitter pages for all daily Spill updates.
RELATED ARTICLES
album reviewsnettwerk
7.0