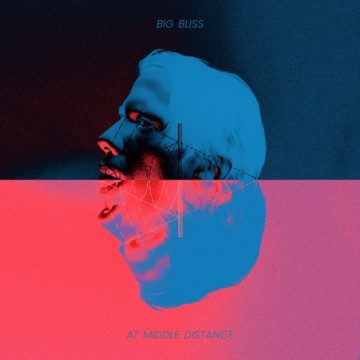 If there ever were to be a second post-punk revival, Big Bliss would be its standard-bearer. Anyone looking for a primer on post-punk have it all here on the Brooklyn band’s debut At Middle Distance, an album with a sound that sits equidistant between Editors’ The Back Room and Interpol’s Turn on the Bright Lights.

Opener “Constants” is as taut and efficient as a trio can get, with its lockstep guitar grooves, rippling basslines, and Cory Race’s propulsive drumming. The frenetic pace and Wallace May’s melodic bass equally abound on “Conscious Being” and “Surface.” May’s backing vocals offer warmth to their dark disco, especially on “Fortune,” a sugary comet of a tune with chiming guitars heralding an abrupt end. Slower, with added keyboards and a strident sense of regret, “Content Saves” has a tension that should be cathartic live—and possibly a clue to the future sound of Big Bliss.

The title connotes a calculated, methodical self-critique or personal inventory, a post-punk conceit that gives At Middle Distance a cerebral heft. Vocalist/guitarist Tim Race’s voice is neither morose nor bombastic, sounding like a less stentorian Paul Banks or maybe Bob Mould looking for his cell phone. Tim allows a vulnerability in his voice (and a fondness for early R.E.M.) to be exposed in the raw nerve of the album, “Answer.” Failing to answer the question “How can we innovate?” upon the post-punk revival, however, is where the band comes up short on its debut. When it begins to measure its own singular context, Big Bliss will solve the equation.

Charles T. Stokes is a nonprofit resource development coordinator and donor researcher based in Denver, USA. He’s also a tennis player and writer looking to make a racket with his own noises. “There are places in the world where one cannot publicly listen to or perform whatever music they choose without fear of harassment or prosecution. The freedom to write about new music is power, a privilege.”
RELATED ARTICLES
album reviewalbum reviewsalternative rock
8.0