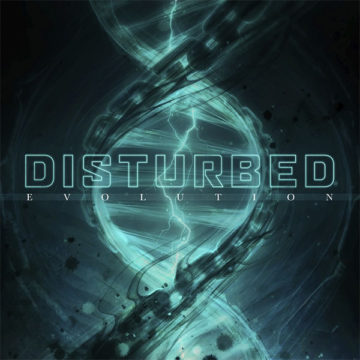 Chicago-based metal icons Disturbed are back with their seventh studio album after a year long hiatus. Their album, aptly titled Evolution, takes the band to a new stage in their career. With their widely successful rendition of Simon and Garfunkel’s classic “The Sound of Silence” included in their previous album, Immortalized, the world outside of metal has taken notice and a new wave of appreciation for the band, and in particular David Draiman’s impressive vocal range, has taken hold. Does this mean that the evolution of Disturbed includes a much softer side? As Evolution may indicate as it includes four notable ballads, quite a few more than their previous albums, that may actually be the case. Is this the best move for the band? Time will tell.

Not to say that this album does not have its fair share of heavy songs – it wouldn’t be Disturbed without them and the band is far more than Draiman’s vocals. From their first single “Are You Ready” to tracks like “In Another Time” and “Saviour of Nothing”, these feature the driving guitar rhythms from Dan Donegan and throbbing base lines from John Moyer that are iconic to Disturbed’s metal offerings that have kept fans mesmerized for over a decade.

These tracks also feature the other side of Draiman’s vocal ability, while Disturbed’s ballads allow for Draiman to show off his voice’s warmth and clarity, as a metal singer, his voice takes on a gravelly and rough tone which is what makes his one of the most iconic voices in metal music.

And then there are the ballads which are bittersweet offerings sprinkled throughout the album. From “A Reason to Fight”, the band’s anthem to everyone who has or who has loved someone battling addiction, to “Hold on to Memories”, a tear-jerking departure between loved ones. These are acoustic guitar based songs filled with emotion and passion and, damn it, it’s impossible not to be moved by them.

There has been some criticism with regards to Disturbed’s lyrics and how they can lack a bit of maturity – often it’s not something that particularly stands out to me but when it does, it’s hard to overlook. Their single “The Best Ones Lie” with a chorus that includes “I’m telling you the best ones lie, And there’s nothing you can say that will change my mind, So how about you don’t even try”, I think I may have angrily scribbled that in a notebook when I was 13.

That aside, the ultimate hidden gem on this album is actually one of the bonus tracks on the deluxe version of Evolution. “Uninvited Guest” is beautifully raw and, painfully emotional and full of remorse. The musical progression of the song is simply stunning and it does hearken to the emotions captured in Disturbed’s version of “Sound of Silence” and in one of their older ballads “Darkness”.

So is the evolution of Disturbed a softer and more sensitive side? Perhaps. The ballads are a great way to show off Draiman’s pipes and vocal ability but so long as they don’t lose their hard and aggressive metal edge, where the rest of the band have a chance to really shine, they’ll be in fine form.

Samantha is both a writer and a fan of the arts and has been able to find numerous ways to pair the two. Eager to dive head first into writing for Spill, Samantha is an avid partaker and reviewer of live art in Toronto serving as an editor at Mooney on Theatre exploring live local theatre, she's a photojournalist for Go Globehopper, a travel, dining and tourism blog that focuses on Toronto and abroad and previously for Lithium Magazine. She's passionate about music, theatre, photography, and writing -- not necessarily in that order. She drinks tea more than coffee, prefers ciders over beers, and sings karaoke way too loudly. You can follow her on various social media including Facebook, Twitter, and Instagram.
RELATED ARTICLES
album reviewalbum reviewsare you ready
8.0