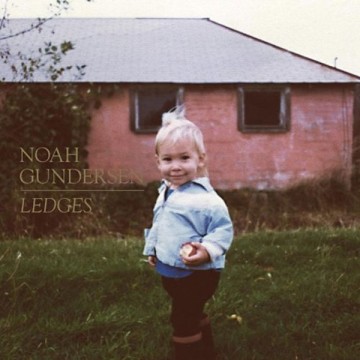 After nearly two years of endless recordings and dubbing, Noah Gundersen’s debut full-length album has finally come into fruition. Self-produced, raw and emotionally driven, Ledges is a wonderful showcase of the staggering talent Gundersen possesses. Gundersen has been gaining a slew of followers through social media and beyond since his first EP, Brand New World, was released in 2008. His gaining popularity was evident during this year’s highly anticipated North American tour, having several sold-out shows prior to the album’s debut. The tracks on Ledges are beautifully crafted, featuring Gundersen and his sister Abby’s layered vocals, acoustic melodies and brilliant violin interludes.

The traditional American folk influences are apparent in the compositions of several songs, echoing Bob Dylan’s gusto and Leonard Cohen’s harmonic expression. Biblical hymns and passages can also be found within the lyrics of songs such as, “Poor Man’s Son” and “Ledges”, as Gundersen playfully spins popular quotations on their head, “And I take a little too much / Without giving back / If blessed are the meek, then I’m cursed”.

The creative efforts off of Ledges will give young indie-darlings something to aspire to as they sing along to the addiction-driven song “Cigarettes”, and the heart-wrenching “Dying Now”. With Gundersen’s graceful delivery and each recording’s deliberate narrative arc, this album is sure to be heralded as one of the industry’s top debuts of 2014. Be certain to grab your tickets quickly, as Noah Gundersen’s Ledges tour is going to be one for the books.