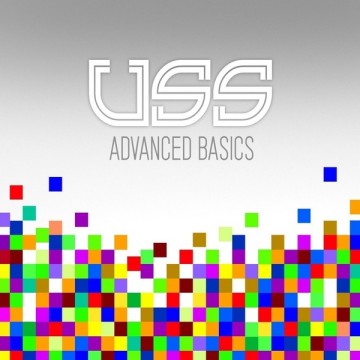 Advanced Basics is the fourth studio release from USS, the Markham-Stouffville-bred strum n’ bass duo Ashley Buchholz and Jason “Human Kebab” Parsons. Buchholz, songwriter/mad scientist-in-the-psych-ward blends dark humour and dad humour (the line ‘formaldehyde and seek’ in “Nepal”, for instance). This adds a necessary buoyancy to the weighty subject matter, which threads addiction, the difficulties of loving damaged people (as a damaged person), and a buttload of heartbreak. The character of Kebab-as-hypeman is quieter than ever, opening the album with a quick “Here we go…” in “Hydrogenuine” and a few hearty woo’s in “Yin Yang”. His presence is felt in his trademark scratching and filthy beats. USS are more confident in each other and their abilities on this record, again joined by producer Tawgs Salter (Approved, Lights’ Siberia) who also exudes a deeper understanding of the band. The album sounds like USS, but more developed than ever before. They’ve come back from summer vacation with breasts, and it’s hard to stop staring.

The ambitious “Built to Break” finds Buchholz at his angstiest; “I don’t mean to trip/ but it’s easier than dealing with it” is balanced by a triumphant arrangement including manager and one-time Not By Choice drummer Liam Killeen. The single “Yin Yang” almost never was — the release of the album was pushed back to accommodate its production. Its addition balances the more morose tracks on the album and serves as an easy analogy for the band’s dynamic – the passive, reflective, sensitive Buchholz contrasting the aggressive, extrovert Parsons, and in each, a dollop of the other.

If you hate USS, this isn’t the album that will change your mind, but casual fans and diehards alike will dig it.