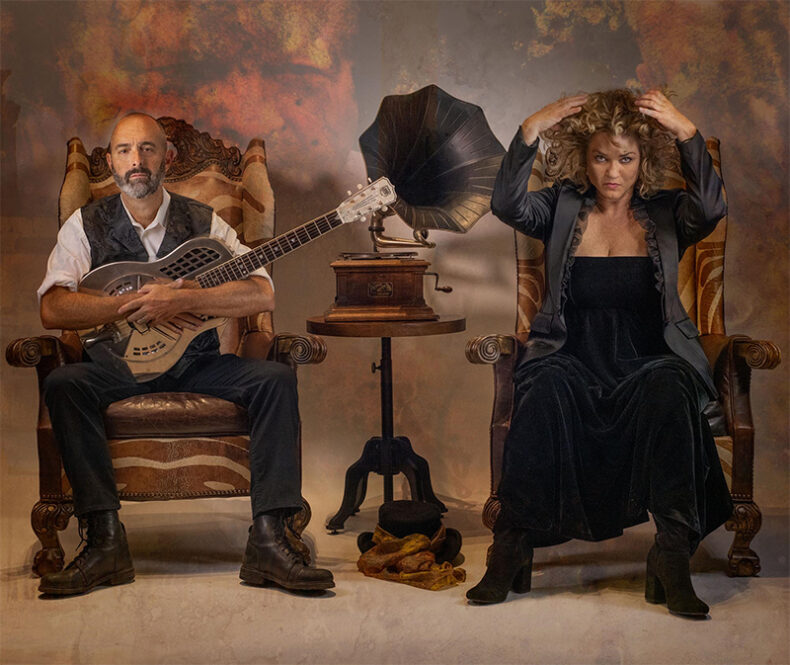 Wow, wow, wow. I think it would be an understatement to say that a fair amount of music has been produced from Austin over the past years. The city is virtually exploding with talent – both of legendary calibre and newcomers – and part of this may also have to do with the fact that the city is home to a handful of world-class producers and mixers, among whom is one Tim Palmer.

You may already be familiar with Palmer’s work – after all, he has a long list of famed works to his name. A well-renowned record producer, who has mixed and produced some of the most iconic rock and alternative albums and songs over the past four decades, you definitely have heard of some of them – HIM, Reeves Gabrels and David Bowie via Tin Machine, Pearl Jam, Ozzy Osbourne, The Mission plus dozens of other big names.

Today we introduce you to his latest project – namely, Austin-based rock duo The Caughtery. A duo of two seasoned Austin musicians, this duo is actually new in name. Their debut single “Fragile” is truly powerful. Largely down to the talents blossoming from the ying-yang partnership of Lisa Tingle and David Gayler, who are gearing up to present their debut eponymous EP.

Envisioned as a series of “musical paintings”, expressing the pressure and fragility of the human state over the last two years, we can agree that there certainly have been plenty of up and downs in that period. A lot of people on the edge, many who fell over the edge. A lot of folks who lost everything and lost their loved ones. A lot of people and even companies whose vulnerabilities were exposed… all appropriately reflected in the title of this song. Indeed we are all so “Fragile”.

Tingle’s voice and Gayler’s instrumentation leave no doubt whatsoever about the level of power and passion that has gone into this recording. This is stunning and impressive in so many ways – it’s a tight progression of chords, the music is highly melodic and the performance is impeccable. Without doubt, the production is also faultless, which is not surprising given Palmer’s involvement. Overall, an A+ effort with outstanding output – this is one sublime unforgettable creation.

Tingle and Gayler may have united for numerous reasons, but a large part of that has been their mutual love and exploration of multiple genres, including. rock, indie, fusion, jazz, blues and R&B. Together with Tim Palmer, their musical storytelling developed song by song into what will become their debut offering. If “Fragile” is any indication of what the whole of this recording represents, we definitely look forward to hearing the rest.

Recorded by Lee Jackson at Studio71West near Austin, this EP was jointly produced by David Gayler and Tim Palmer (Robert Plant, Ozzy Osbourne, Tin Machine, The Mission, HIM, U2, Pearl Jam), who also mixed and contributes guitar.

The Caughtery’s story began in 2020, when David called Lisa to record a song he knew fit her vibe. What started out as a one-off collaboration ultimately turned into a full EP of material under the name The Caughtery. On this debut EP, Lisa’s lyrics explore such themes as relationships, new and old, the passing of friends and the state of our world today.

Described as a “Female Robert Plant”, a powerhouse like Janis Joplin with the soul of Aretha Franklin, Lisa Tingle has received multiple awards over the past decade at the Austin Music Awards, including Female Vocalist of the Year, Band of the Year, Best Song, Musician of the Year, and Album of the Year. She has toured and performed with many legendary acts, such as Etta James, Stevie Ray Vaughan’s Double Trouble, Ray Benson (Asleep at the Wheel), Eric Johnson, Stephen Bruton, Monte Montgomery and Marcia Ball.

Having launched her music career in Los Angeles, Lisa gigged, recorded, and was also a session vocalist for writers at Almo-Irving Publishing (part of A&M Records), singing songs submitted to the likes of Tina Turner and Dolly Parton. Upon moving to Texas, she formed the rock band Black Pearl and landed a record deal with Capitol Records, her songs catching the attention of TV producers with placements on ‘Beverly Hills 90210’ and ‘Melrose Place’. She again began to work with publishing world, singing for TV and radio commercials, films and songwriters. She contributed to several soundtracks with Ray Benson, including Jean-Claude Van Damme’s ‘Universal Soldier’, followed by work on Sandra Bullock’s ‘Miss Congeniality’ and Robert Rodriguez’s ‘Spy Kids 3’. She has released six solo albums to wide acclaim and ample international airplay, including on Britain’s BBC Radio.

David Gayler is a multi-instrumentalist, producer, songwriter and studio owner based in Spicewood, Texas. Born in upstate New York, Gayler relocated to Texas in the mid-80s to attend college. Having started out on piano, he eventually transitioned to his beloved instruments – acoustic and electric guitar. A member of various bands throughout his musical career, he has opened for such notable artists as The Romantics, Charlie Sexton and Jerry Jeff Walker, in addition to being a member of the Party Band during MTVs journey down to Texas in the late 1980s

“Fragile” will be released across digital platforms on May 25 and can be pre-saved at https://distrokid.com/hyperfollow/thecaughtery/fragile. The full self-titled EP will be released this coming summer.