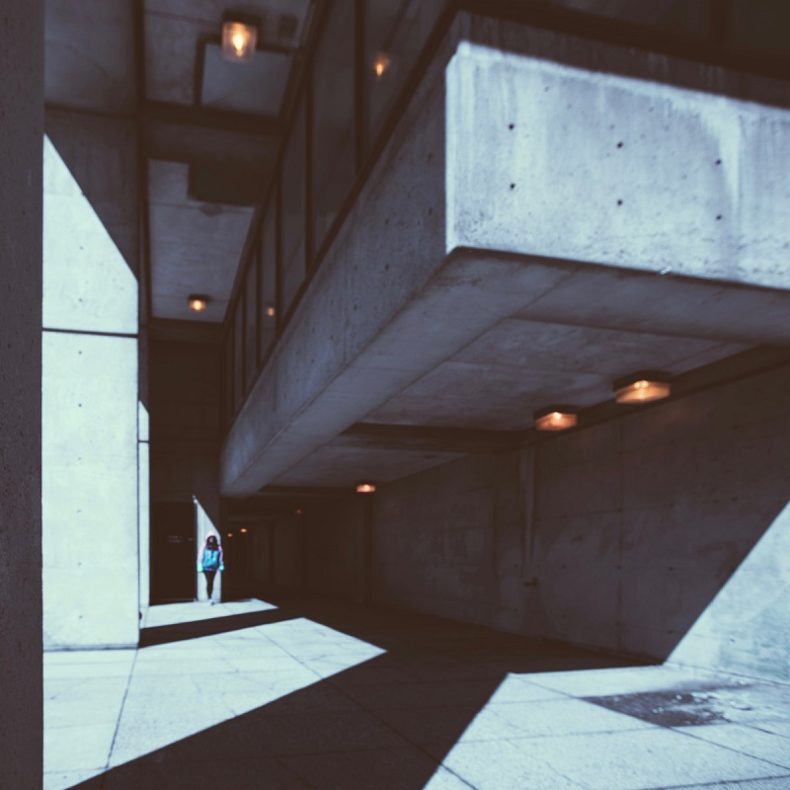 “The words they’ve gone away, what now? ” asks Lisa Conway aka. L CON on “Light Come”, the heart-breaking third song on new full-length Insecurities in Being. Gone are the lofty science fiction concepts of 2016’s Moon Milk – this record is about honest feelings, about navigating ongoing anxiety and depression, and about maybe wanting to actually quit music – a raw and vulnerable collection of songs from an artist in a time of serious re-evaluation and transition. This also marks Lisa’s first release after deciding to take a step back from cinematic trip-hop collective Del Bel, which she co-wrote in and was the lead singer of for seven years and three albums.

“I genuinely wasn’t sure I had any songs in me anymore, so I set out to make a low-key instrumental EP – I wanted to try and fall in love with making things again. But some of those sonic explorations started to evolve and demand vocal melodies. I gave in. ”

Though primarily a solitary creative process, with Lisa tackling the writing, production, arranging, and engineering, as well as several instruments, most of the songs are still a full-band affair, featuring longtime friends and collaborators Andrew Collins (the Skeletones Four), Jordan Howard (Jim Guthrie, I am Robot and Proud), Karen Ng (Andy Shauf, Dave Clark), and Johnny Merritt (the Barmitzvah Brothers, the Skeletones Four). In addition, the album features a stunning performance by fellow CFC alumni Casey MQ (Unbuttoned, Zaki Ibrahim), performing a song Lisa wrote and immediately knew she had to convince Casey to sing.  All analog mixes were done in Guelph with renowned musician (and Johnny the drummer’s dad) Scott Merritt, and mastering done by Harris Newman in Montreal.

This is not Lisa’s first solo record, and likely not her last – the songwriter-producer-composer-sonic adventurer has been steadily making work for years, and though this is officially her third full-length as L CON, the count is one shy of a dozen when one includes her releases under other monikers plus albums with Del Bel. She’s been nominated for a SOCAN Songwriting Prize, completed creative residencies from New Brunswick, Canada, to Aubagne, France, and occasionally shyly reveals her high school band was nominated for a Canadian Folk Music Award. A recent alumni of the Canadian Film Centre’s prestigious Slaight Music Residency, and a graduate of the Masters in Sonic Arts program from Queen’s University Belfast, Lisa continues to have an active composition practice – collaborating with filmmakers, dancers, and performance artists, and working with other musicians in a production and engineering capacity at her rural recording studio north of Toronto. She plans to complete that instrumental EP.

Insecurities in Being will be released on limited edition tape cassette, and all digital platforms on May 25, 2018 via Wildlife Sanctuary Sound Recordings.

“Andrew and I have a good friend who is constantly picking up all sorts of vintage treasures at garage sales or on Kijiji, and he often lets us tinker around with them in our studio before re-selling them. This song was made on one of those beautiful borrowed items – the EML SynKey. It lives in Brooklyn now, and it’s rare, and basically that’s all I can think about when I think about this song. Shouldn’t have let it go…..”

SPILL TRACK OF THE DAY is published daily, showcasing the best in recent independent releases, with a focus on the Toronto Indie Music Scene. We also feature tracks from across Canada and around the World, including Canadian francophone releases. Remember -- you heard them here first. ;)
RELATED ARTICLES
l connew musicnew music alert
6.0