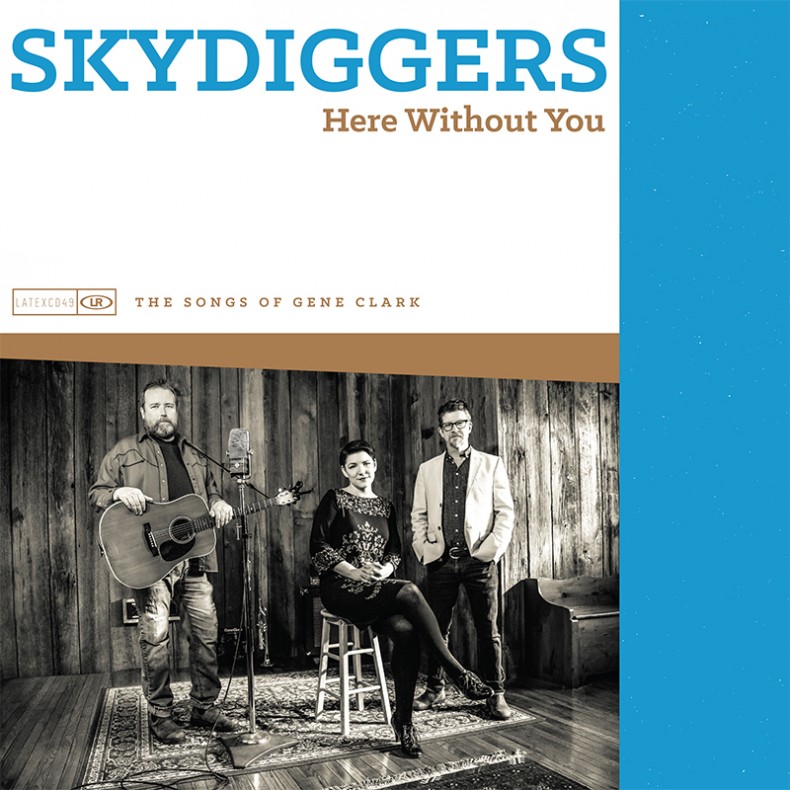 SKYDIGGERS – “SET YOU FREE THIS TIME”

On May 13 Skydiggers will release their new album, Here Without You – The Songs of Gene Clark, interpreting the works of one of the world’s most treasured songwriters. The eight song collection covers, and in some cases radically reinvents, timeless Gene Clark compositions including the tricky, staccato lyrical flow of “Set You Free This Time” which is expertly negotiated by Andy Maize and Jessy Bell Smith.

PRE-ORDER HERE WITHOUT YOU – THE SONGS OF GENE CLARK HERE

Those familiar with Skydiggers’ live set will know that they often include covers, however Maize explains that “there is something about Gene Clark’s songs that struck a deeper chord with us. This doesn’t feel like a tribute record, because the songs have always felt personal. It’s hard to explain, but they feel like something we would have or could have written — we’re just very glad Gene Clark did write them.” Beginning April 30 Skydiggers will take these songs and more on the road for a string tour dates including multiple nights at Hugh’s Room in Toronto and The Carleton in Halifax. Full tour dates can be found below.

Set for release on Latent Recordings and recorded by Michael Timmins (Cowboy Junkies) Here Without You is a deep roots connection for Skydiggers. “It seems like we’ve been fans of The Byrds forever, so to say that we’ve just discovered Gene Clark’s songwriting contributions to the band makes it seem like he’s been hiding in plain sight all of these years,” says Skydiggers. “In this discovery we have made a connection to our roots; not just to the roots of folk rock and the Woody Guthrie, Bob Dylan, or Gene Clark in the New Christy Minstrels, style of folk singing but back to the Appalachians and across the ocean to the songs of the Brits and the Scots. Our album Here Without You is our attempt to capture the essence of our roots as distilled through Gene Clark’s songs.”

Even if you’re not familiar with the name Gene Clark, there’s a good chance you know his music. He was a founding member of iconic 60s group, The Byrds, and went on to make many more solo records after parting with the band. Since his death in 1991 at 46, compilations and collections of unreleased material have added to his song catalog and songwriters and singers have been effusive in praising his work and raiding his songbook. Everyone from The Eagles and Tom Petty to This Mortal Coil; Linda Ronstadt to Paul Weller; Robert Plant & Alison Krauss to Teenage Fanclub have recorded his songs. Kanye West even sampled The Turtles’ version of Clark’s “You Showed Me” on his record My Beautiful Dark Twisted Life.

Guitarist Josh Finlayson explains, “the timelessness of Gene’s work is built on a traditional music foundation. But as we pulled the songs apart and listened to some demo versions of his songs, we began to hear how innovative and unusual his approach was; the way he could go from major to minor chords, the way the chords are suggested by the melody, his turns of phrase. It’s so unique.”

Here Without You is a singular achievement and finds common ground in the same generosity of spirit found in both Clark’s songs and more than 25 years of Skydiggers music.

The Skydiggers
Here Without You – The Songs Of Gene Clark
(Latent Recordings)
Release Date: May 13, 2016

Here Without You – The Songs Of Gene Clark Tracklist

SPILL TRACK OF THE DAY is published daily, showcasing the best in recent independent releases, with a focus on the Toronto Indie Music Scene. We also feature tracks from across Canada and around the World, including Canadian francophone releases. Remember -- you heard them here first. ;)
RELATED ARTICLES
here without youlatent recordingsskydiggers

SPILL NEW MUSIC: SKYDIGGERS ANNOUNCE ‘HERE WITHOUT YOU – THE SONGS OF GENE CLARK’

by SPILL NEW MUSIC on March 22, 2016
Skydiggers Announce Here Without You – The Songs Of Gene Clark Iconic Toronto Band Interpret The Work Of Byrds Songwriter For New Album, Out May 13 Album Release [...]