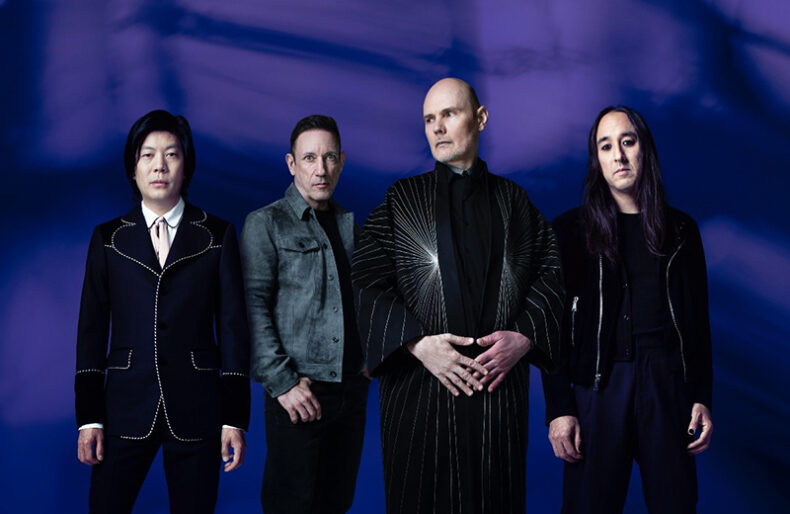 The Smashing Pumpkins today announced their North American arena tour with special guests Jane’s Addiction. Produced by Live Nation, the 32-date SPIRITS ON FIRE TOUR will commence on October 2 in Dallas, TX and will conclude on November 19 in Los Angeles, CA at the Hollywood Bowl. Both bands revealed the exciting news live this morning exclusively on SiriusXm’s The Howard Stern Show. Pre-sales begin on Thursday, May 12 from 10am local. General on-sale begins Friday, May 13 at 10am local. For tickets and more details, go to https://smashingpumpkins.com/tour

Tomorrow night, in support of The Smashing Pumpkins tour announcement, the GRAMMY® Award-winning, critically acclaimed band will be performing and talking on CBS’ The Late Late Show with James Corden.

Later today, The Smashing Pumpkins will appear at the TCL Chinese Theater in Hollywood for a commemorative ceremony in celebration of their tour announcement. Each band-member will add their handprints in cement, joining a long list of global treasures before them. 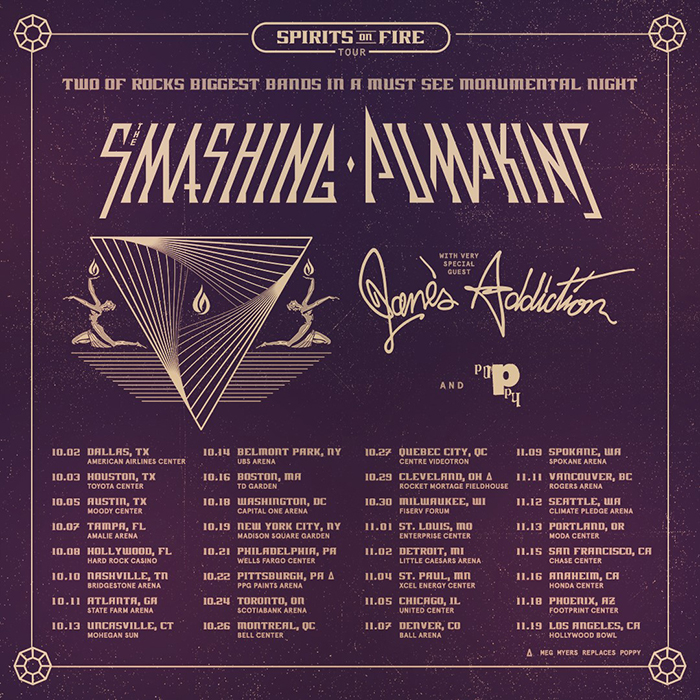 When The Smashing Pumpkins first emerged out of Chicago in 1988, the world had never heard a band quite like them. They spun together rock, pop, shoe-gaze, metal, goth, psychedelia, and electronic into a kaleidoscope of saccharine melodies, fuzzy distortion, bombastic orchestration, incendiary fretwork, eloquent songcraft, and unshakable hooks. Upon their formation, their sound was different, iconoclastic, and wholly new—and it still is today. As a result, they’ve sold over 30 million albums worldwide and collected two GRAMMY® Awards, two MTV VMAs, and an American Music Award. Their catalog is highlighted by the platinum Gish [1991], the quadruple-platinum Siamese Dream [1993], diamond-certified Mellon Collie and the Infinite Sadness [1995], platinum Adore [1998], and gold Machina/The Machines of God [2000]. In 2018, they embarked on one of their most successful tours ever, the Shiny and Oh So Bright Tour, followed by SHINY AND OH SO BRIGHT, VOL. 1 / LP: NO PAST. NO FUTURE. NO SUN. Meanwhile, 2020 saw the release of the band’s eleventh full-length and latest double album, CYR. As prolific as ever, The Smashing Pumpkins confirmed they will release more music in 2022 as they resume touring. More details to come.

SPILL NEWS strives to keep our readers up to date with news and events in the music industry. We keep you informed of the most recent information regarding new releases, tour dates, and information items about your favourite artists.
RELATED ARTICLES
jane's addictionnewsthe smashing pumpkins
7.0

by Gerrod Harris on January 22, 2021
Perry Farrell The Glitz; The Glamour Last Man Music Perry Farrell stands as the godfather of alternative rock. His contributions to popular music are undeniable, so much so, [...]
10

by SPILL NEWS on March 23, 2016
LOLLAPALOOZA REVEALS 2016 LINEUP FESTIVAL CELEBRATES ITS 25TH ANNIVERSARY WITH STELLAR ROSTER OF ARTISTS Chicago might just a future vacation destination for you once you check out the [...]