News
67
previous article
SPILL TRACK OF THE MONTH: ASHES FALLEN - "AT THE END OF ALL THINGS"
next article
SPILL VIDEO PREMIERE: MYNK - "BOUNDARIES" 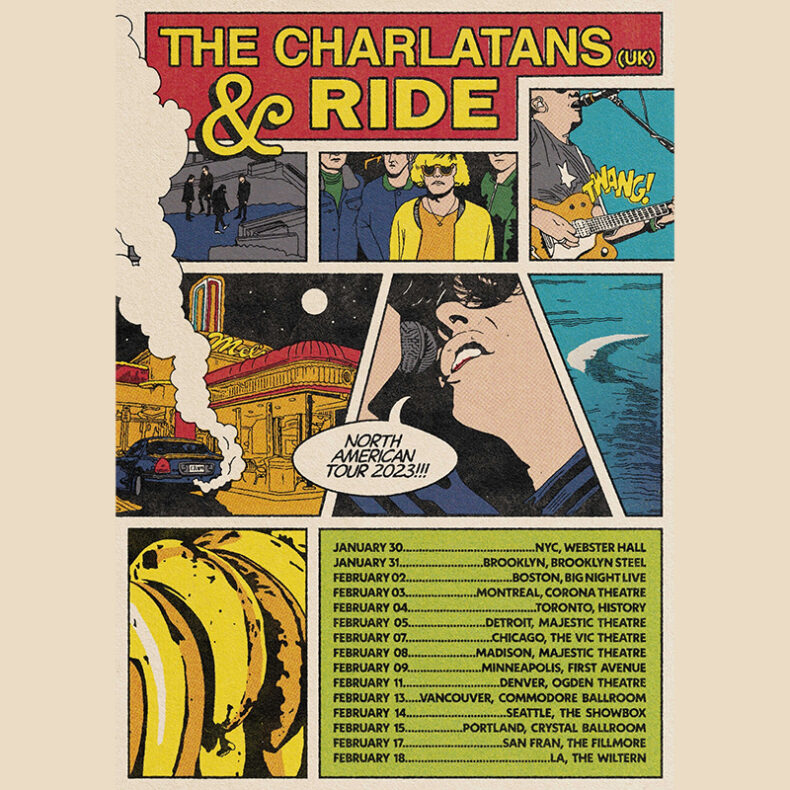 Two of the UK’s most enduring and best-loved bands, The Charlatans UK and Ride have announced plans for a North American co-headline tour, set to begin January 30, 2023 at New York City’s Webster Hall and then continue through a February 18 finale at The Wiltern in Los Angeles, CA.. Tickets for all announced dates go on sale Friday, December 2 at 10 am (local). For complete details and ticket information, please visit www.thecharlatans.net/gigs and www.thebandride.com.

In 1993, The Charlatans UK and Ride co-headlined Daytripper – two now-legendary concert events held in the British seaside towns of Brighton and Blackpool. The upcoming North American tour will once again see the two bands trading off the headline slot each night, with both performing classic albums in full – The Charlatans UK performing 1992’s landmark sophomore LP, Between 10th and 11th, Ride performing 1990’s debut masterpiece, Nowhere – along with a selection of greatest hits, fan favorites, and more.

About The Charlatans UK

The Charlatans – Martin Blunt (bass), Tim Burgess (vocals), Mark Collins (guitar), and Tony Rogers (keyboards) – have been on a remarkable journey for over three decades, from their beginnings as 1990 Manchester scene hopefuls to their current role as one of the most durable and treasured bands in British music, joined by a passionate and loyal following that has given them lasting success. Over the years, The Charlatans have notched 13 top 40 studio albums in the UK – three of them #1s – alongside 22 hit singles, four of which made the top 10.. The rollercoaster highs have been accompanied by some shattering lows, any which one of them could have felled a less resilient band, from nervous breakdowns to near bankruptcy and the deaths of two founder members. Somehow, the band have not just carried on but adapted and transformed. The classic Charlatans sound – driving Hammond organ, Northern Soul and house-influenced rhythms, swaggering guitars and Tim Burgess’s sunny yet somehow yearning vocal – is instantly recognizable.

Hailed as “a certifiable classic,” Between 10th and 11th was originally released in 1992 and features such classic singles as “Tremolo Song,” “I Don’t Want To See The Sights,” and the band’s biggest US hit to date, “Weirdo.” More recently, The Charlatans celebrated their own 30th anniversary with 2021’s career-spanning best-of, A Head Full of Ideas, and a similarly titled 2021-22 world tour. In addition, frontman Tim Burgess has created the hugely popular Tim’s Twitter Listening Party, an ongoing series of real-time album playbacks via Twitter, featuring stories from bands and fans, rarely seen images, and exclusive insights and anecdotes from the artists who created some of music’s most iconic albums. His acclaimed new album, Typical Music, is out now.

Shoegaze legends Ride floated out of Oxfordshire in 1988 with a primordial blaze of noise and a sound like scorched clouds. Their first four EPs affirmed them as an alternative sensation, with 1990’s full-length debut, Nowhere,  rising to the top 20 and proving Creation Records’ first major success story. 1992’s Going Blank Again rose even higher, reaching the top 5 on a celestial torrent of imagination like none other of its era. Two further albums followed before Ride decided to call it a day, their standing as leftfield sonic giants undiminished. Ride reformed in 2014, first with a series of top-billed festival sets (including Coachella and Primavera) and then followed by a full-scale reunion tour. 2017 saw the release of Weather Diaries, the band’s first new album in over 20 years. Ride’s sixth studio album, This Is Not A Safe Place, made a top 10 debut upon its August 2019 release, the band’s highest chart position in 25 years. A 2020 world tour celebrating the 30th anniversary of Nowhere was rescheduled to 2022, accompanied by the deluxe reissue of their early classic albums – including 4 EPs, Nowhere, and Going Blank Again – all available now via Wichita Recordings HERE.

SPILL NEWS strives to keep our readers up to date with news and events in the music industry. We keep you informed of the most recent information regarding new releases, tour dates, and information items about your favourite artists.
RELATED ARTICLES
c'mon c'monfuture lovenews
7.0