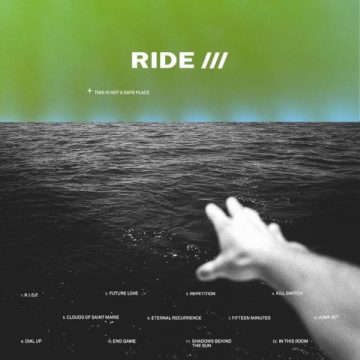 Ride
This Is Not A Safe Place
Wichita Recordings

Ride’s sixth album, the second since 2015’s sudden reunion sees them exploring new sonic territory, while at the same time making an enjoyable record for the listener.

Ride for most people is up there with the other fathers and mothers of shoegaze/dream pop.  In the early days, being heavily influenced by My Bloody Valentine and Stone Roses, they carved out two huge records, Nowhere and Going Blank Again.  Nowhere in particular is a staple and should be on every top 10 list from the 1990s.

They broke up and got back together again many years later as did Slowdive (shoegaze legends). In addition, very much like Slowdive’s new record this one is on par but takes more of a chance on itself, specifically on songs like “Future Love” which can stand up to the old Ride material. It is a journey through loopy guitar effects and has an amazing bridge that makes you fall in love all over again with the band.

The track that steps out of line in the best way is “Kill Switch”. This is the type of song that demands you nod your head in unison with the driving guitar hooks and chorus. “Clouds of Saint Marie” is a nice mix between teenage mope and song craft.  There is not a terrible song on this record. Finishing the album off, “In This Room” is a low fi, hazy song that gives the listener more space while at the same time still being catchy old Ride.

Ride is living up to the title of the album in some respects, but musically this is a very safe place for fans looking for a must listen record.

Ex-pat living in Geneva, Switzerland from the hard streets of Baltimore, Maryland. Ex-radio-monkey and avid listener of all things that are supposed to be cool.
RELATED ARTICLES
album reviewalbum reviewsfuture love
9.0