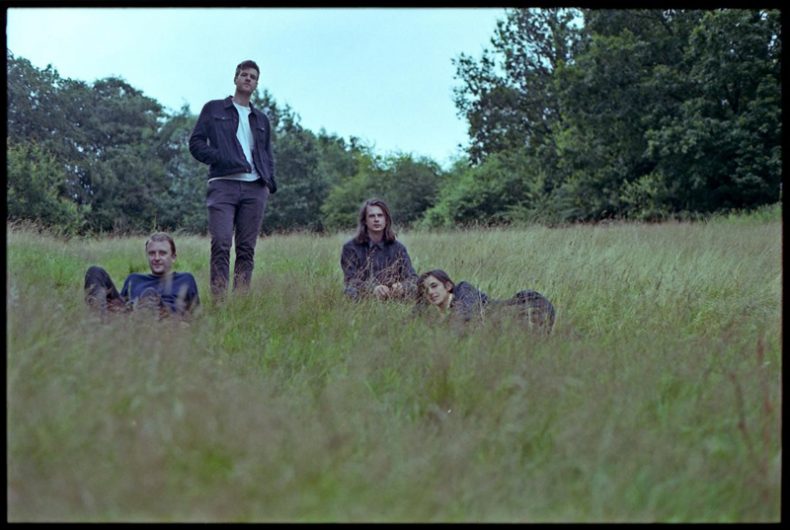 Spinning Coin will release their second album Hyacinth via Domino imprint Geographic. A brave step forward, Hyacinth is an album full of poetry, light and warmth of heart, and presents a band holding nothing back. It registers a number of changes for the group since their debut LP Permo in 2017: personnel changes, geographical changes, a new context, an ever-changing world outside.

The quartet both lost and gained a member, with Cal Donnelly exiting the group, and Rachel Taylor joining. Rachel and Sean Armstrong have relocated, leaving Glasgow for Berlin – Rachel, from Canada, had no choice but to leave the UK, and Sean followed her. “I think if anything the change has brought us closer as a band,” Rachel reflects, “and made it clear to us that we wanted to continue making music together.”

Today, Spinning Coin are pleased to share the first song from Hyacinth born of this new set up, “Feel You More Than World Right Now.” With an animated video directed by Joseph May, the new track comes penned by Armstrong – now one of three songwriters in the band alongside Jack Mellin and Rachel.

Throughout Hyacinth, there is joy in spades, but also melancholy, and a checked fury, threading the group’s political vision through their reflections on the personal and the interpersonal. Jack explains that the new songs “are about the need for love in an often very unloving world. Trying to find a balance of some kind between feelings of apathy, negativity, detachment and action, positivity and oneness.” Whilst Mellin’s songs were more pointedly political on Permo, here he has built more complexity into his writing. Elsewhere, Rachel contributes her first song to a Spinning Coin release in the form of the harmonious “Black Cat.”

Hyacinth was recorded during a few days, by Peter Deimel at Black Box Studios in France, while the group were on a summer tour. It was an idyll, a restorative respite. That feeling carries through to the album – there’s a sense of society and collectivism at the heart of these pop songs, and a commentary on the optimism of the will, no matter how bleak things can get. Ultimately, on Hyacinth, the Spinning Coin ethos stays true to itself, as Sean expands about the experiences and the motivations behind the new music: “It’s trying to connect with other people on a human level, doing something that we love, and trying to embrace the unknown.”

SPILL NEWS strives to keep our readers up to date with news and events in the music industry. We keep you informed of the most recent information regarding new releases, tour dates, and information items about your favourite artists.
RELATED ARTICLES
dominonews

by SPILL NEWS on March 31, 2021
MY BLOODY VALENTINE SIGN TO DOMINO FULL CATALOG AVAILABLE DIGITALLY FOR THE FIRST TIME EVER Domino are immensely proud to [...]
8.0