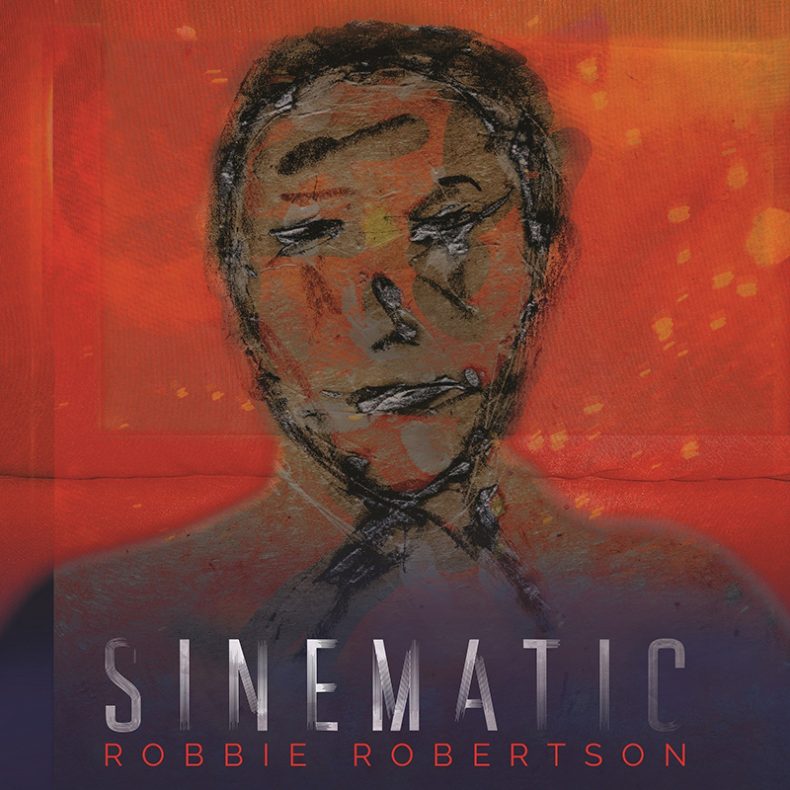 Inspired by his decades of creating and composing music for film and filled with an enthralling set of songs exploring the darker corridors of human nature, Robbie Robertson’s aptly titled, evocative new solo album Sinematic is set for release on September 20 via UMe. The album is available now for preorder on CD, digital and 180-gram 2LP, with a Deluxe Edition, limited to 1000 copies, to follow on October 25. The Deluxe Edition presents the album on CD and 180-gram 2LP vinyl with a 36-page hardcover book featuring custom artwork Robertson has created for each track. The 13-song self-produced collection is Robertson’s first new studio album since 2011’s introspective How To Become Clairvoyant.

For his new album, Robertson drew inspiration from his recent film score writing and recording for director Martin Scorsese’s eagerly anticipated organized crime epic “The Irishman,” as well as the forthcoming feature documentary film, “Once Were Brothers: Robbie Robertson and The Band,” based on his 2016 New York Times bestselling memoir “Testimony.” The documentary will celebrate its world premiere on Thursday, September 5 as the Opening Night Gala Presentation for the 44th Toronto International Film Festival.Today, Robertson provides the first glimpse of Sinematic with the release of the album’s opening track, “I Hear You Paint Houses,” available now for streaming and as an instant grat download with digital album preorder. Drawn from Scorsese’s film and the book it’s based on, Charles Brandt’s “I Heard You Paint Houses” about confessed hit man Frank “The Irishman” Sheeran, the song is a riveting duet with Van Morrison that features bright guitar and a blithe tone that belies its chilling lyrics. Mob code for hiring a hit man, painting houses refers to spattering walls with blood. Opening with Robertson’s devilish invitation, “Shall we take a little spin/To the dark side of town?,” the opening track sets the album’s stage for more gripping tales of villainy and vice and powerful stories about destruction and despair.

Preorder Sinematic and listen to “I Hear You Paint Houses”: https://RobbieRobertson.lnk.to/Sinematic

“I was working on music for ‘The Irishman’ and working on the documentary, and these things were bleeding into each other,” says Robertson of the impetus for Sinematic. “I could see a path. Ideas for songs about haunting and violent and beautiful things were swirling together like a movie. You follow that sound and it all starts to take shape right in front of your ears. At some point, I started referring to it as ‘Peckinpah Rock’,” a nod, Robertson says, to Sam Peckinpah, the late director of such violent Westerns as “The Wild Bunch.”

Narrated in Robertson’s cool parched croon, the yarns unspool over his vibrant guitar stylings and a bedrock of moody, midtempo rock, anchored on most tracks by bassist Pino Palladino (John Mayer Trio, The Who), drummer Chris Dave (D’Angelo, Adele), and keyboardist Martin Pradler, who also mixed the record. The band is rounded out with Afie Jurvanen, who provides guitar and backing vocals, along with vocalist Felicity Williams, a regular collaborator with Jurvanen in his band Bahamas. Robertson is joined on the album by special guest vocalists Van Morrison, Glen Hansard, Citizen Cope, J.S. Ondara, and Laura Satterfield; musicians Jim Keltner, Derek Trucks, Frédéric Yonnet, and Doyle Bramhall II; and producer Howie B who provides throbbing electronic textures to several tracks.

On “Dead End Kid,” one of Sinematic’s many standouts, Robertson turns the lens inward as he recalls some of the obstacles and low expectations he faced as a youth as a member of a First Nation and Jewish gangster family. Wielding his guitar like a dangerous weapon, he demonstrates the breathtaking playing skills that caused a frenzy on Bob Dylan’s notorious 1966 electric tour and that helped to birth the Americana genre. Robertson’s defiant lyrics recall his teenage dream to play his music around the globe: “I want to show the world/Something they ain’t never seen/I want to take you somewhere/You ain’t never been.” Robertson’s raspy vocal is perfectly complemented by Glen Hansard’s soulful, soaring voice. The acclaimed Irish vocalist of The Frames, The Swell Season, and star of the film “Once,” Hansard resurfaces on Sinematic‘s spirited rocker “Let Love Reign,” inspired by John Lennon’s call for peace.

While many of the songs on Sinematic focus on sinful themes far removed from Robertson, he draws from his own extraordinary life story for the track “Once Were Brothers,” a bittersweet reflection on The Band, written for the new documentary of the same name. Robertson is joined on the track by Nairobi native J.S. Ondara and American singer/songwriter Citizen Cope. Mournful strains of a harmonica and organ play as Robertson relates The Band’s farewell, singing “Once were brothers/Brothers no more.” Of the song, Robertson says, “There is war and conflict involved. Writing it hurt inside sometimes, but those experiences can be rewarding in the emotional outcome. It hurt but I loved it.” 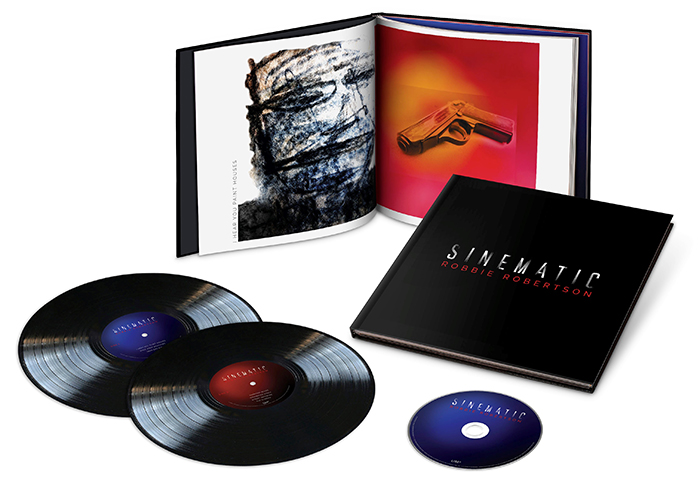 Enhancing Sinematic‘s film noir thrust is a suite of multimedia images that Robertson created, including artwork for the cover and each individual song. Listeners are brought even further into his Sinematic world with a series of striking portraits and abstract images, ranging from expressionist paintings to experimental photography. In one depiction, a photo of Robertson’s Walther 9mm pistol, “the same gun James Bond used,” is drenched in crimson and gold, juxtaposed next to a menacing figure. In another, paint seeps into a textured canvas as if it’s been burned in. The art is included in the Standard Edition’s CD and LP booklet and presented even more elegantly in the Deluxe Edition’s lavish 12″x12″ casebound hardcover book.

For fans who would like to own a piece of the artwork, four images – the Sinematic album cover, “Beautiful Madness,” “Shanghai Blues,” and “Walk In Beauty Way” – are being made available for purchase as archival-quality, framed canvas prints in a limited run of 100 for each. Ten canvas prints of the album’s cover art will be signed by Robertson with proceeds benefiting the American Indian College Fund. To view and order the images, visit: https://RobbieRobertson.lnk.to/Sinematic

As Robertson prepares to release his sixth solo album, The Band’s iconic self-titled sophomore LP will turn 50 just a few days later (plans to celebrate the anniversary will be announced soon). For six decades, the legendary songwriter, musician and guitarist has created timeless, influential music that has transported and transfixed generations, just as he dreamed about as a kid growing up in Toronto. With Sinematic, Robbie Robertson has once again created a captivating album that builds on his celebrated solo works while pushing forward in new sonic directions.

SPILL NEWS strives to keep our readers up to date with news and events in the music industry. We keep you informed of the most recent information regarding new releases, tour dates, and information items about your favourite artists.
RELATED ARTICLES
citizen copeglen hansardhowie b

by Gerrod Harris on September 20, 2019
TIMELESSLY IN THE AIR A CONVERSATION WITH ROBBIE ROBERTSON While no easy feat in itself, becoming a musical legend is that much more significant when your [...]
9.0