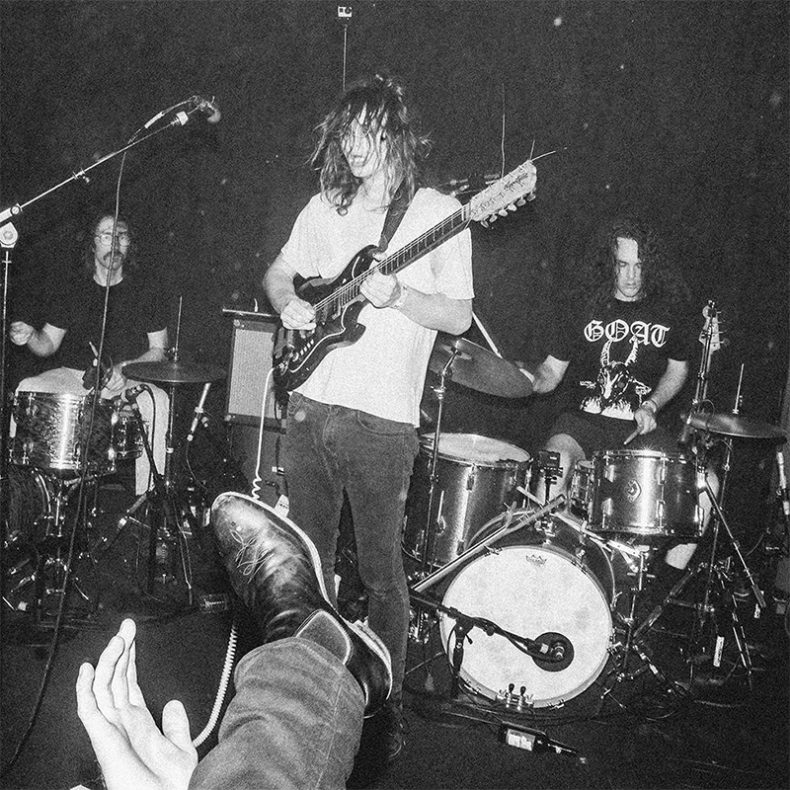 Just under a month after delivering their award-winning 2016 album Nonagon Infinity, King Gizzard & The Lizard Wizard took the stage at San Francisco’s The Independent for a set both wildly frenetic and meticulously executed. In one of their final club gigs before bursting onto the international scene—soon selling out amphitheaters and headlining festivals—the Melbourne septet laid down a breakneck performance that, in the words of SF Weekly, “made every organ ache just right.” Newly unearthed by ATO Records, Live in San Francisco ’16 – due out November 20 – captures an extraordinary moment in the band’s increasingly storied history, a 13-song spectacular likely to leave every listener awestruck and adrenalized.

Multi-tracked and impeccably mixed, Live in San Francisco ’16 simultaneously channels the massive energy of King Gizzard & The Lizard Wizard’s set while echoing the sweaty intimacy of the 500-capacity venue. Like Nonagon Infinity—the band’s eighth full-length and worldwide breakthrough—Live in San Francisco ’16 kicks off with “Robot Stop,” an immediately transportive track built on blistering riffs and bombastic rhythms. Reaching its majestic climax with a 22-minute rendition of fan favorite “Head On/Pill” (from 2013’s Float Along – Fill Your Lungs), the album rushes forward with a furious intensity as the band tears through the entire set without ever breaking—a feat that induces a sort of joyful delirium in anyone who bears witness.

With nearly half the setlist made up of Nonagon Infinity tracks, Live in San Francisco ’16 unfolds with the same exquisitely controlled chaos King Gizzard & The Lizard Wizard brought to that arguable masterpiece—a nine-song body of work crafted as the world’s first infinitely looping LP (i.e., each track flowing seamlessly into the next, with the album-closing “Road Train” linking straight back into the opener). “2016 was peak tightness for Gizz,” notes frontman Stu Mackenzie. “Around this time we were really into tightly composed sets, and the show was like one long song—everything linked, everything planned. We threw that idea out the window later on, but this live record is a great document of that moment in our collective psyche.”

An unequivocal turning point for King Gizzard & The Lizard Wizard, Nonagon Infinity arrived in April 2016 and drew major critical acclaim, with NPR hailing it as “masterfully bizarro” and Pitchfork stating that the album “yields some of the most outrageous, exhilarating rock ‘n’ roll in recent memory.” Not only a critical success, Nonagon Infinity won Best Hard Rock/Heavy Metal album at the 2016 ARIA Music Awards, while eternally zeitgeisty director Edgar Wright named it among his favorite records of all time. Two years in the making, the album marked a drastic departure from the folk-and-Tropicalia-tinged psych-pop of its 2015 predecessor Paper Mache Dream Balloon, with the band taking a bold creative leap in its structure. “I wanted to have an album where all these riffs and grooves just kept coming in and out the whole time, so a song wasn’t just a song, it was part of a loop, part of this whole experience where it feels like it doesn’t end and doesn’t need to end,” Mackenzie explained back in 2016. When replicated live, that effect is doubly mesmerizing, as frenzied and transcendent as a glorious fever dream.

Formed in 2010, King Gizzard & The Lizard Wizard made their debut with 2012’s 12 Bar Bruise and quickly emerged as a creative powerhouse, releasing five albums in 2017 alone. With 15 studio albums now under their belt, the band have unfailingly defied expectation over the years, offering up everything from the blues-rock/deep-electro boogie of Fishing For Fishies to the merciless thrash metal of Infest The Rats’ Nest (their most recent studio effort). Widely revered for their explosive live show—recently chronicled in the feature-length documentary Chunky Shrapnel—they’ve also performed at such iconic venues as Brixton Academy, appeared at leading festivals like Bonnaroo and Glastonbury, and sold out tours of the U.S., U.K., Europe, and Australia. In addition, King Gizzard & The Lizard Wizard have rightly earned something of a cult following in the last decade, with ever-growing numbers of fans congregating online to share a seemingly endless treasure trove of memes, mixes, theories, and ephemera.

Looking back on the Nonagon Infinity era, Mackenzie regards that period as a particularly kinetic time for King Gizzard & The Lizard Wizard. “We were dreaming big, experimenting in the studio, messing around with microtonal music, writing a lot on the road,” he recalls. And in reflecting on the tour that ultimately gave way to Live in San Francisco ’16, Mackenzie speaks to a certain sweetly hazy nostalgia. “It felt mostly like a weird holiday,” he says. “We road-tripped a big lap of the U.S.A. in a couple of Ford E-Series vans—I remember driving through the California Redwoods, visiting lots of cities for the first time, lying in piles of trash in Brooklyn. We’d always planned to tape this show, but the recording was buried in dust of time—and then like a boomerang, it came back. And for that I’m glad. I had a lot of fun revisiting it, and I hope everyone can find some joy in this musical time capsule.”

Live in San Francisco ‘16 is out on LP, CD, and digital on November 20. The vinyl version comes as an eco-friendly double LP, with a jacket printed on recycled board and the record packaged in a recycled brown paper bag instead of plastic shrink wrap. A special eco-wax edition will be pressed on recycled, randomly colored, eco-wax vinyl, and a deluxe edition will feature a rainbow foil wide-spine jacket. The album is available for pre-order HERE.

SPILL NEWS strives to keep our readers up to date with news and events in the music industry. We keep you informed of the most recent information regarding new releases, tour dates, and information items about your favourite artists.
RELATED ARTICLES
ato recordscadence music groupking gizzard & the lizard wizard