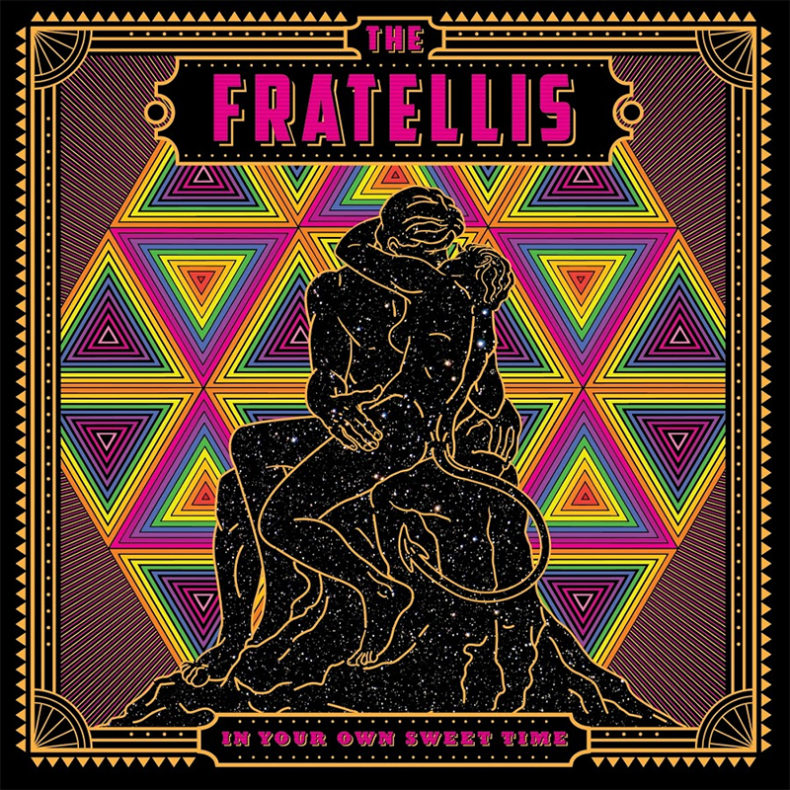 IN YOUR OWN SWEET TIME OUT MARCH 9 VIA COOKING VINYL

The Fratellis have returned! After four albums and hundreds of sell-out shows across the world, the irrepressible Scottish trio are thrilled to announce their fifth studio album In Your Own Sweet Time released by Cooking Vinyl on 9th March. Maturing from the roguish young scallywags of Costello Music, into a chameleonic powerhouse with a sound that is bigger, bolder, and still shot through with a whip-smart, pitch-black sense of humour. To celebrate the release of In Your Own Sweet Time The Fratellis will embark on an eight date tour of the UK ending on their home turf in Glasgow.

Alongside pre-orders of In Your Own Sweet Time The Fratellis are offering a delicious little taste of what’s to come with first track The Next Time We Wed – a hyperactive slice of mischief matching the Fratellis’ characteristic impish theatricality and wit with ricocheting Prince-like guitar riffs. Jon Fratelli says of The Next Time We Wed:

“It started life like a lot of the songs on In Your Own Sweet Time… as a completely different song! It morphed from a country song in D Minor to a disco song in A Major; an unusually bright and warm day in Glasgow may be to blame for this!”

With In Your Own Sweet Time, The Fratellis are teaming up once again with six-time Grammy and Mercury nominated American producer Tony Hoffer (Beck, The Kooks, M83, Belle & Sebastian).

Out 9th March, In Your Own Sweet Time boasts all the muscular energy of American pop music of the 1970s with the testosterone-fuelled virtuosity of the best British rock. A band that can’t sit still when it could be tearing you from your chair to dance, The Fratellis are back.

In Your Own Sweet Time Track Listing

SPILL NEWS strives to keep our readers up to date with news and events in the music industry. We keep you informed of the most recent information regarding new releases, tour dates, and information items about your favourite artists.
RELATED ARTICLES
cooking vinylin your own sweet timenews
9.0