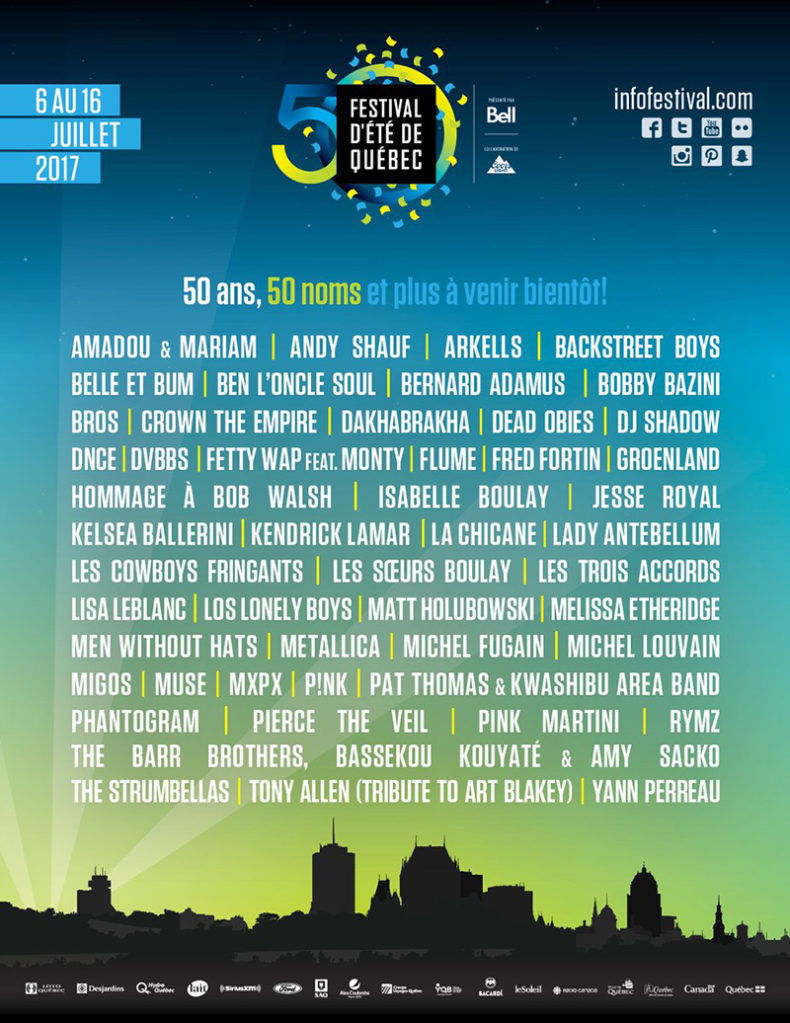 Festival d’été de Québec is pleased to announce the first 50 acts performing at the 50th edition, coinciding with Canada’s 150th anniversary. Once again the Festival welcomes a wide range of talent including local and national headliners, emerging artists and internationally acclaimed acts over 11 days, all for the modest price of $95 CAD until June 6.  Festival d’été takes place at the world heritage UNESCO site of Québec City, from July 6 – 16.

“As we look forward to the 50th year of Festival d’été de Québec, we couldn’t be more excited,” said General Manager Daniel Gélinas. “We are so proud to remain one of the few major non-profit, independent festivals in North America. Throughout our history, we’ve been able to make the music of both emerging artists and international celebrities alike accessible to all. It has always been our mission since the inception of the Festival, and the 50th anniversary will more than ever continue to showcase that vision.”

First 50 acts for the 50th Anniversary

The Festival d’été de Québec is celebrating its grand 50th Anniversary with an epic, retrospective exhibition of the Festival’s history and three original street performance shows with a unique French flair. The festivities will include:

-50 Summers of FEQ, an exhibition presenting photos, news articles, posters, and other mementos culled and curated from the archives of the past 49 Festivals. The collection will be on view to the public at the Parc de l’Amérique-Française from late June through the end of July.

-At Parc de l’Amérique-Française, L’orchestre d’homme-orchestres, which creates musical instruments from everyday objects, will delight audiences every night before the Festival concerts with music performed on a wild assemblage of recycled materials by its forty-plus members. The show salutes Canada 150, which coincides with the 50th Anniversary of Festival d’été de Québec.

-The French street theatre troupe Plasticiens Volants have created a show especially for the Festival’s 50th Anniversary, with their stunning and impressive large installations. Part puppet, part kite, its magical, colossal characters will float overhead and mingle with the crowd in an original dramatic and musical production. The mobile street performances begin around 11 PM, and travel from the Grande-Allée–—one of Québec’s main thoroughfares– to the Coeur du FEQ, the Festival’s central rendezvous, for a grand finale, July 7 – 9.

-The Transe Express troupe of street performers has cooked up a collection of trapeze artists, violinists, and an opera singer for a stunningly inventive show combining theater, acrobatics, and music, all performed while suspended from a giant mobile.  The production’s soundtrack, Lâcher de Violons, is composed of memorable musical moments from the Festival’s history. These overhead performances will start around 11 PM at the Grande-Allée and end at Coeur du FEQ from July 13 – 15.

SPILL NEWS strives to keep our readers up to date with news and events in the music industry. We keep you informed of the most recent information regarding new releases, tour dates, and information items about your favourite artists.
RELATED ARTICLES
festival d'ete de quebecflumekendrick lamar