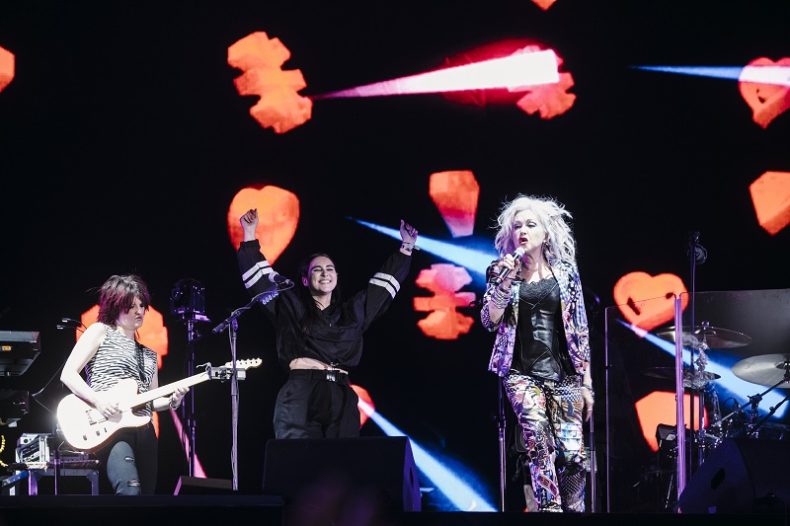 Looking sharp and glamorous, rolling around at the edge of the stage in a shiny satin suit, Cyndi Lauper started things out with the familiarity of “I Drove All Night”, a song Céline Dion made popular and therefore embraced by Québec city as the sun gets ready to set over the Plains of Abraham.

She then takes us back to her breakthrough debut album, She’s So Unusual,  playing recorder on the controversial “She Bop”, a song that put her on Tipper Gore’s “Filthy Fifteen” list but forever won the hearts of the LGBTQ community. Before she breaks into “All Through The Night”, she tells a story about its recording and how the producers kept her up until she finally got the right take at sunrise.

Up next is a new song called “Hope” inspired by her battle with psoriasis and carries movements of a sensitive nature on the shoulders of Cyndi. The audience on the big projection screens are expressing sincere signs of festive joy and appreciation for this 65-year-old cultural icon.

Now we continue down the ’80s road into a soundtrack song called “The Goonies Are Good Enough For Me” and then rolling back into her debut album again with a cover song from The Brains called “Money Changes Everything”. Things are chilled out a bit as Cyndi goes a capella with an old Scottish folk song called “Wild Mountain Thyme’.

We now make another return to the debut album watching her play the stringed Appalachian dulcimer on “Time after time”, before breaking into this evening’s most anticipated moment in the song “Girls Just Wanna Have Fun”. She now turns our attention towards the musical “Kinky Boots” which she provided lyrics and music for. The song from that Broadway production played here is called “Not My Father’s Son”, and expresses her challenges of a woman “raising a boy who tried so hard to walk like dad”.

Cyndi gives praise and thanks to this evening’s headliner, Lorde (just as Lorde did in her set for Cyndi) and is seated once again behind the dulcimer to play this evening’s closing song “True Colours”‘. A sea of cellphone lights are flashing over the audience landscape. She says goodbye and shows an emotional and sincere expression of gratitude before disappearing from the large video screens.

The girl just wanted to have fun. Midway through the song tonight, she reminded us that “boys want to have fun” too, and apparently ‘”everybody wants to have fun” — “They just wanna”.