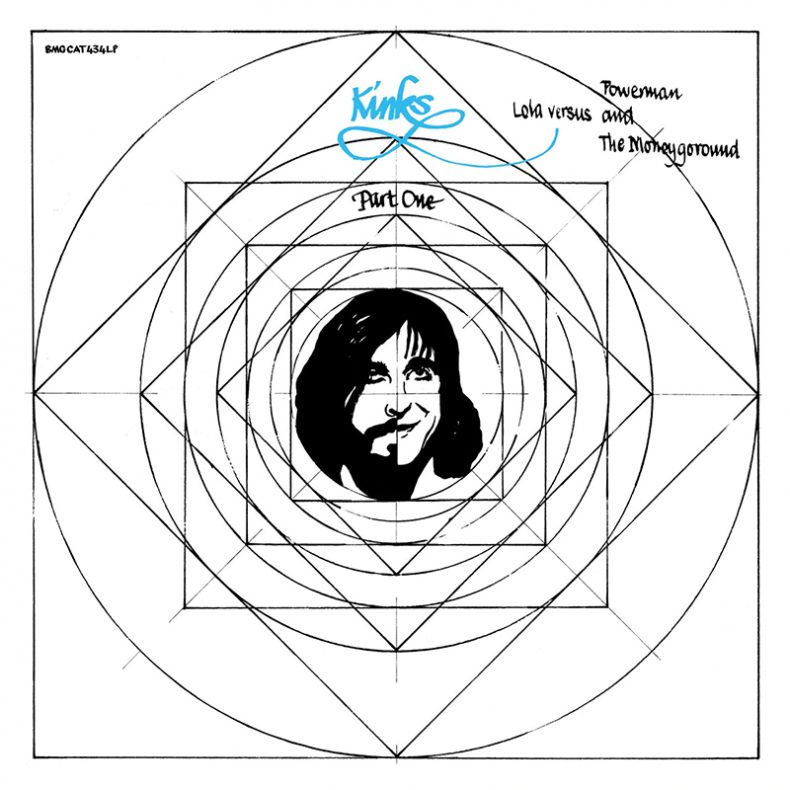 Lola Versus Powerman and the Moneygoround, Part One, commonly abbreviated to Lola Versus Powerman, or just Lola, is the eighth studio album by The Kinks, recorded and released in 1970. A concept album ahead of its time, it’s a satirical appraisal of the music industry, including song publishers, unions, the press, accountants, business managers, and life on the road. One of the all time classic Kinks albums.

Let the 50th anniversary celebrations begin, as The Kinks unveil special multi-format release plans for the album as a lovingly produced Deluxe Box Set, 1LP, Deluxe 2CD, 1CD and digitally – to be released on December 18 via BMG.

Although it appeared during a transitional period for The Kinks, Lola Versus Powerman was a success both critically and commercially for the group, charting in the Top 40 in America and helping restore them in the public eye, making it a “comeback” album. It contained two hit singles: “Lola”, which reached the #9 US, #2 UK and Germany – becoming the Kinks’ biggest success since “Sunny Afternoon” in 1966 – and “Apeman”, which peaked at #5 in the UK and Germany.

Ray says: “The album is a celebration of artistic freedom (including my own) and the right for anyone to be gender free if one wishes. The secret is to be a good and trusting person and friend.”

Ahead of its time, the track “Lola” was written by Ray Davies in early 1970 and recorded at Morgan Studios in London. The track supposedly tells the romantic tale between a young man and a transgender person whom he meets in a club in Soho, inspired by an alleged encounter by the band’s manager. Released with Village Green Preservation Society outtake “Berkeley Mews” in the UK and the Dave Davies-penned “Mindless Child of Motherhood” in the US, the iconic hook has been sung around the world for decades.

The Lola Versus Powerman and the Moneygoround, Part One release plans follow the recent successful #LolaDay, celebrating 50 years of the seminal hit single. Fans were able to ‘Lolafy’ their individual photos with 10 new custom-made stickers available via The Kinks website. Throughout the day some of the finest acts such as The Amazons released their interpretations of the track via The Kinks’ channels, and various exciting Kinks archive audio, video and printed material was shared with fans.

The ‘Lolafy’ site has been updated from today to include four new stickers of the band members, Dave, Mick, Pete and Ray.

The 50th Anniversary box set campaign launches with a brand new Ray Davies’ remix / medley of the Kinks track “Any Time” (titled “The Follower – Any Time 2020 Feat: Anytime by The Kinks”). https://thekinks.lnk.to/AnyTime2020PR

Originally written by Ray as a possible B-side for “Apeman”, “Any Time” includes previously unreleased versions and excerpts of several Kinks tracks from the Lola album as well as added spoken word and sound effects. It is a concept piece about which Ray states “The isolation caused by Coronavirus can give people time to re-evaluate the world and re-assess their lives. Music can comfort the lonely, transcend time and it’s not the future or the past, yesterday, today or tomorrow. It’s anytime”. He adds, “I saw a way of making this unreleased 1970s track connect to an audience in 2020. I also saw a way of showing that music can time-travel, that memory is instantaneous and therefore can join us in the ‘now’. I put this together as something surreal then realized that it was really happening. The song has found its place – after its 50th Birthday!”

The Kinks
Lola Versus Powerman And The Moneygoround, Part One
(BMG)
Release Date: December 18, 2020

Pre-Order Lola Versus Powerman And The Moneygoround, Part One HERE