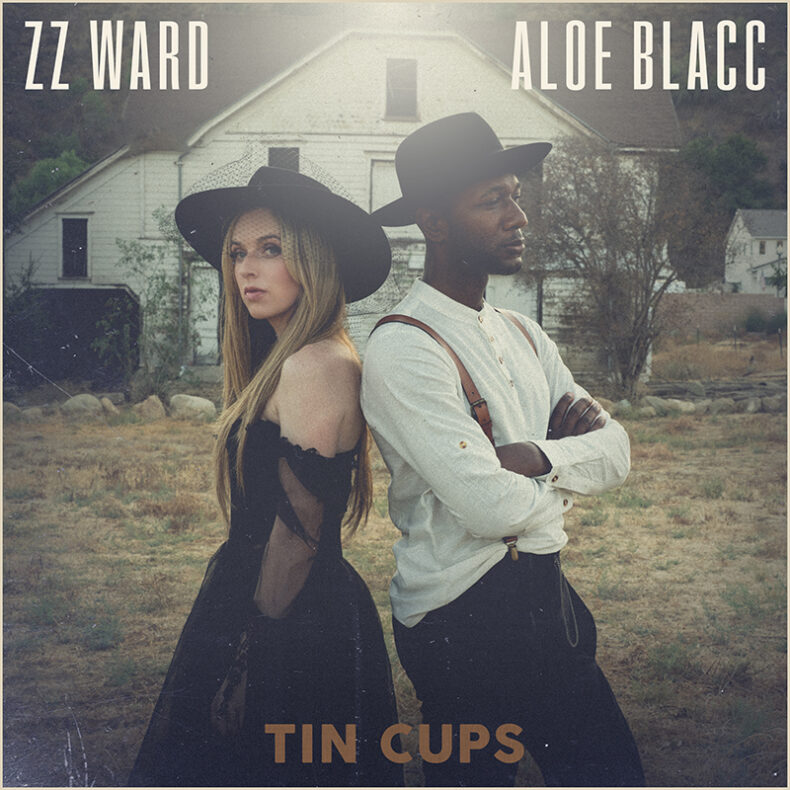 TEAMS UP WITH ALOE BLACC FOR RELEASE

Soulful rocker ZZ Ward and Aloe Blacc are teaming up for Ward’s latest release, dropping the new song “Tin Cups” this past week. A stirring duet, the song will showcase an equally evocative music video, coming soon, and highlights the blues-inspired sound Ward is renowned for.

Written by Ward alongside longtime collaborator and husband Evan Kidd Bogart, Clarence Coffee Jr. (aka “Coffee”) and Emanuel “Eman” Kiriakou, “Tin Cups” is a story of two people’s attempt at self-preservation after previous heartbreak, letting lovers down like a row of the titular tin cups.

“‘Tin Cups’ is about the inability to let yourself love someone,” Ward shares. “Writing this song was deeply personal and I hope it will resonate with others the way it does with me. I’ve had relationships fall victim to a lack of vulnerability and hesitancy to truly let someone in. It is often difficult to dig down deep and find the strength to open your heart again.”

Anchored by a riveting guitar, Ward’s unparalleled voice kicks off the track as she sings about the difficulties of getting close to someone before being joined by Blacc in the second verse. “Oh my my these whiskey lies / Ain’t ever gonna tell the truth / Oh my my no man no cry / I’ll never give my heart to you,” they declare, emphasizing the internal struggle that comes with being afraid to open up to someone new.

“The addition of Aloe elevated this song and added depth that only an artist of his caliber can.” Ward adds. “He has a way of evoking emotion through his vocals that is a rare quality for one to possess.”

“Tin Cups” is the first single from Ward’s forthcoming LP, her first since welcoming son Ezra in February 2021 with Bogart. The song will hit radio airwaves on October 24 and Ward’s new, highly-anticipated project will arrive in 2023.

Ward has been playing curated shows throughout the year but will hit the road on tour once again next year to allow fans to further connect to her ever-expanding catalogue. More information will be announced soon. “I’ve been writing non-stop for the past two years,” Ward notes. “I can’t wait to share all of the new music and to see everyone back on the road in 2023!”