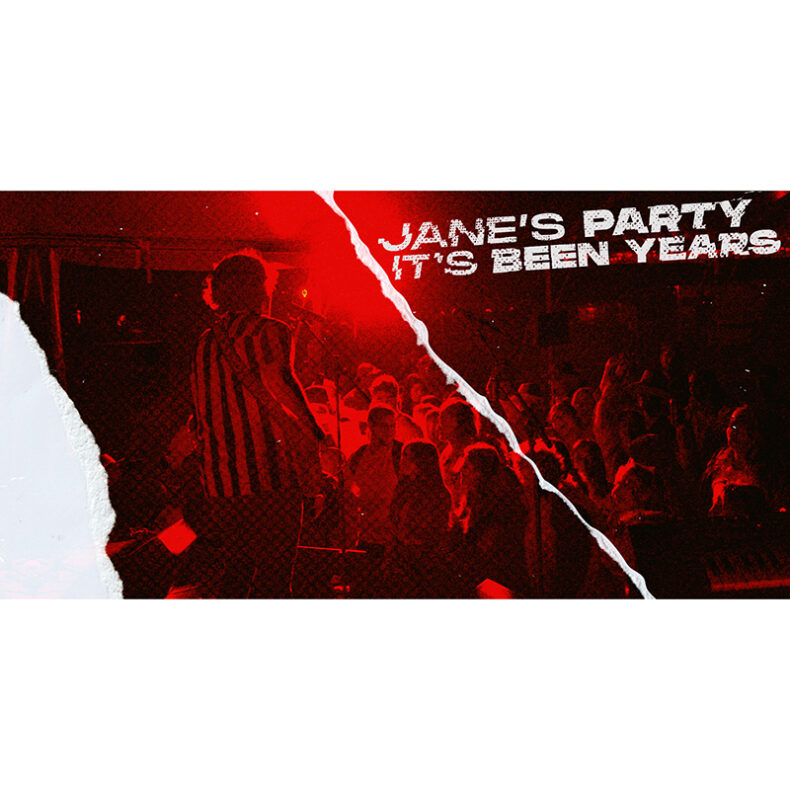 Revered indie rock outfit Jane’s Party release the lyric video for “It’s Been Years” from studio album Live Again, shot live at the Mariposa Folk Festival in Orillia this past summer. Born from a period when their lives were lived on the stages of pubs and in the back rooms of bars, “It’s Been Years” long existed as part of JP’s live show; often played near the end of the night, when inhibitions were lifted and memories were hazy. The radio single speaks to the feeling that although they were on a different path than many of those around them during those times, they were never in it alone.

Endlessly catchy, the charming LP was produced by Carlin Nicholson and Mike O’Brien from popular indie outfit Zeus, who bolstered their production work with guest performances of their own; it features The Sheepdogs and BROS frontman Ewan Currie, Max Clilverd (Tom Odell) and indie pop innovator FRANKIIE. Live Again perfectly captures the essence of a previous generation of music makers, embodying the stylings and sounds reminiscent of the 1970s classic rock era. Jane’s Party craved the more organic and analog side of recording and approached this collection of songs from a live performance perspective first. Guitarist and vocalist Tom Ionescu remarks “Ironically, just as we were wrapping up the recording process, COVID hit, which forced us to pursue a less live and more online musician experience. Two years later, the album title now has added meaning.”

Lead single “Live Again” became a Top 40 alternative single in Canada. The lyric video kicked off a social media campaign full of side-performances, remixes, and short bits all tying back into the original concept centred around bassist and vocalist Devon Richardson being taken hostage. Through a blackout on their online platforms, which the abductors had ‘hacked’, fans found demands to be met in exchange for his safe return: 1 million streams on the new single, 100,000 new YouTube subscribers, and a dozen chocolate glazed donuts. The kidnappers’ expectations were exceeded when total Spotify streams grew to over 8 million. The official music video which formed from the ‘simple idea of burying a band member alive’ soon revealed the true culprits of this mastermind operation—Jane’s Party themselves. JUNO Award-winning engineer Jay Dufour mixed “Stay With Me” featuring Ewan Currie (The Sheepdogs/BROS) on vocals and Max Clilverd (Tom Odell) on slide guitar. Francesca Carbonneau and Nashlyn Lloyd from FRANKIIE sing back-up on “Change Her Mind”, and “Days Of My Youth” charted on the CBC Music Top 20.

Jane’s Party launched season 2 of Wild In The Woods. Shad, pHoenix and Tom Moffett (Trumpet) collaborated on JP’s original track “Days Of My Youth” and a live version of “Storm” which they co-wrote and produced for Shad’s 2022 Polaris Music Prize short-listed record, TAO. They also perform “Islands In the Stream” and “I Don’t Know Why I Love You” together. Carolina East sings “Anymore” and “The Best”. Greg Keelor of Blue Rodeo joins on “Rose-Coloured Glasses”, “Harley David” and tune into their YouTube channel on Wednesday, November 9 at 10am ET to view the final episode, “Wheels”.

The quartet’s first long special, 2020’s The Marshmallow Revue, was their catalyst to testing the feasibility of outdoor recording. With this variety show, JP invited fans into their authentic world with music, humour and their true personalities. Drummer Zach Sutton described 2021’s Wild In The Woods as “part musical experiment, part wilderness therapy, and a whole ton of fun. This was filmed during a time of take out food, CP24 news updates, and virtual rock and roll. ‘Wild in the Woods’ brings our show to the world’s best stage: nature.” Wild In The Woods 2 is the continuation to last year’s Wild in the Woods, for which they were joined by artists Ewan Currie, Danica, Tally Ferraro, Skye Wallace and Nick Rose. The format for 2022’s Wild In The Woods 2 is primarily the same, one original Jane’s Party song and one cover picked by the guest, whichever song they’ve been into singing lately.

Ionescu explains, “We invited guests who we haven’t had a chance to play with all that much, or even at all, in the past. Their picks have all been really awesome, and it’s our opportunity to get hip to new music. It’s really awesome to get to jam and document the experience at the same time. Everyone involved is so talented and professional that every session has turned out so well, even without a rehearsal. It’s a real treat taking the footage and audio home, pressing spacebar, and being pleasantly surprised even by just the raw performance.”

by Andrew Wu on October 31, 2019
JANE’S PARTY w/ FRANKIIE & SIDE HUSTLE @ THE HORSESHOE TAVERN, TORONTO OCTOBER 31, 2019 It was a chill Halloween night, but that was not going to stop Jane’s Party warming things up at the Legendary Horseshoe Tavern. The band is [...]

by SPILL NEW MUSIC on April 27, 2018
JANE’S PARTY – “YOU’RE THE LIGHT” Independent For over a decade now, Jane’s party has brought their irreverent, genre-bending sound to live audiences around the world – from buzzing clubs and famed concert [...]