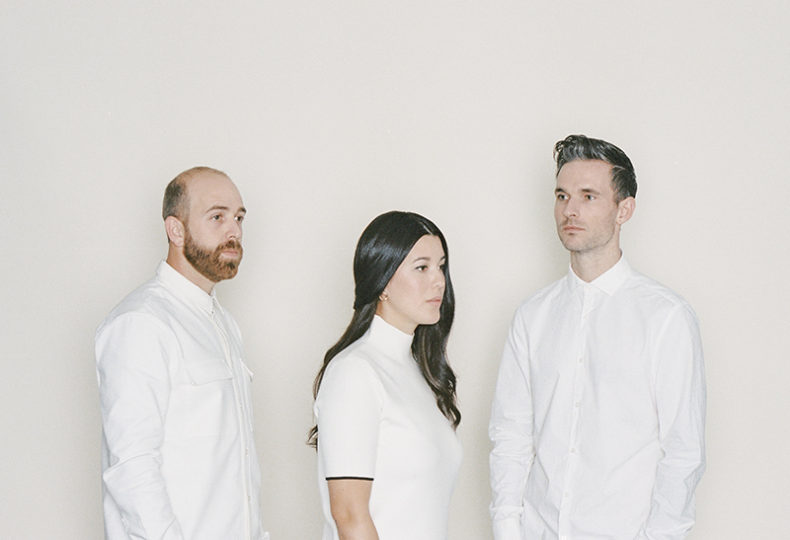 As Long As Your Eyes Are Wide, out on March 31 via Hidden Pony Records, was recorded during a time of significant change. Previously operating as a five-piece, the current trio – made up of frontmen Tyler Bancroft and Ben Worcester and keyboardist Jaycelyn Brown – entered the studio with no preconceptions and no concrete plan. With the help of We Are The City’s Cayne McKenzie on production duties, the finished product is Said The Whale’s most collaborative, focused album to date. Previous records highlighted the contrast between the two founders’ eclectic rock influences and salt-of-the-earth folksiness. Here, their styles become one.

“Step Into The Darkness” exemplifies this cohesiveness. When writing and demoing the song, Ben limited himself to only a drum loop and bass synth, which left room for creativity in the studio. The song came together organically once the band and producer stepped in. Though finalizing the track was a group effort, it still remains incredibly personal and meaningful to Ben: “Step Into The Darkness” was written after a devastating break-up with my girlfriend of six years. The song is me reaching out to comfort my love, reassuring her that she is safe and despite the immense sadness and feeling of loss, perhaps good things will come. We got back together shortly thereafter.”

A decade since the JUNO Award-winning band’s formation, they have now taken the project back to its freeform roots while simultaneously venturing forward into uncharted art-pop territory. Despite the album’s many adventurous sonic forays, it remains true to the spirit of their classic work. At its core, As Long As Your Eyes Are Wide is a singer-songwriter record, guided by introspective lyrics and alchemical group harmonies from Ben, Tyler and Jaycelyn.

After so much change and uncertainty in recent years, Said The Whale has emerged as a unified force. They’ve evolved, but the DNA is the same, and the group’s musical partnership is more fruitful than ever.

SPILL NEW MUSIC strives to keep our readers up-to-date with new releases by your favourite artists, keeping you informed of new album, single, and video releases. Stay tuned -- who knows, you might just discover your new favourite band.
RELATED ARTICLES
as long as your eyes are widehidden pony recordsnew music