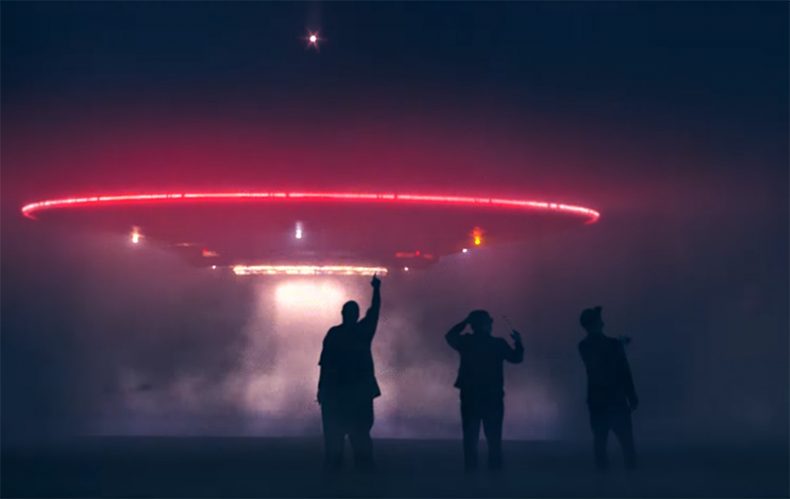 Grammy-nominated group (we couldn’t resist saying it) Run The Jewels have just unveiled a video for “Call Ticketron,” a standout track from their breakthrough album Run The Jewels 3. Directed by Brad Palmer & Brian Palmer of Surround, the clip depicts a sold out show at the Garden in NYC which goes awry when the audience mysteriously disappears. As the guys investigate, matters take an apocalyptic turn, and strangeness ensues. A VEVO exclusive, “Call Ticketron” marks the third official video from RTJ3, which topped Billboard’s Rap, R&B/Hip Hop, Independent & Vinyl charts upon its release in January, and has already accrued year-end honors from Pitchfork, Chicago Tribune, Rough Trade, Paste, The Skinny, and more.

The video arrives just after the final performances of the duo’s expansive 2017 touring itinerary, which spanned 106 shows across the US, Canada, the UK, Europe and beyond, including cataclysmic performances at a wide swath of major international music festivals (including Primavera, Lollapalooza, Glastonbury, Field Day, Made In America, Best Kept Secret, Pitchfork Paris, FYF, and many more), as well as a historic run of four consecutive sold out shows at New York’s Terminal 5. And the guys show no signs of slowing down, with a sold-out Australian tour kicking off in January ’18, followed by a direct support slot on fellow Grammy nominee Lorde’s North American tour in the Spring. Plus the duo are appearing on the coveted PBS live music TV program Austin City Limits on January 27.

Last week the group earned its first Run The Jewels Grammy nomination in the “Best Rap Song” category for the song “Chase Me”, their collaboration with Danger Mouse and Big Boi from the soundtrack to the movie Baby Driver, which scored a #1 box office debut in the US. The nomination marks the latest confirmation of the duo’s continued emergence in popular culture, from film (the group’s music was featured in the trailers for the forthcoming Black Panther, George Clooney’s directorial vehicle Suburbicon, and the recent Baywatch reboot,) to TV (including the surprise launch of their album on the Portlandia season opener, performances on The Tonight Show With Jimmy Fallon & Late Night with Jimmy Kimmel, as interview guests on The Daily Show With Trevor Noah, and a holiday skit with Stephen Colbert for The Late Show that airs tonight, plus soundtrack appearances on Silicon Valley, Dear White People, Good Behavior), to commercial radio (their collaboration with DJ Shadow, “Nobody Speak,” is currently charting #35 and climbing).

The sporting world has also enthusiastically embraced RTJ.The duo performed at halftime of the season debut games of the Atlanta Hawks’s new Philips Arena and threw out the first pitch for the Chicago Cubs at Wrigley Field this Summer, created the theme song “Mean Demeanor” for Electronic Arts’ global smash-success FIFA ’18 game (and feature in the game’s commercial starring Cristiano Ronaldo), and have received enthusiastic in-stadium and social media play from Alabama football, the Miami Dolphins, Boston Red Sox, Memphis Grizzlies, Sacramento Kings, North Carolina basketball, Sporting Kansas City FC and many more. To top it off, Run the Jewels dove into the world of craft brewing with a splash, having their debut collaboration, Stay Gold IPA, voted the #1 IPA in America by Draft Magazine, rolled out an exclusive apparel line with Volcom (including their signature black denim jacket), for whom the duo serve as brand ambassadors, and launched their own augmented reality app, ARTJ.