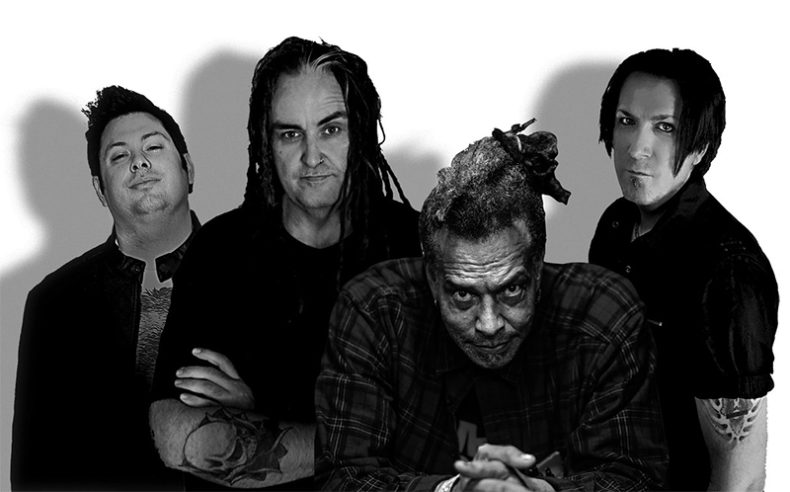 Primitive Race has released the lyric video for their “Cranial Matter,” off of their November 3rd released Soul Pretender LP, to celebrate the album’s dubut on NACC Top 200 and #27 Weighted / #22 Unweighted College Radio Charts. The band is also donating 100% of 2018 album sales to MusiCares to benefit substance abuse treatments for artists battling addiction in honor of late front-man Chuck Mosley, who passed away a mere 6 days following the album’s release.

“‘Cranial Matter’ is probably my favorite song on the album because it was a classic example of Chuck doing what he did best; it was punk rock that ear worms the listener to singing along without knowing the words.” ~Chris Kniker

“When I listened to the music, ideas just came pouring out,” Mosley had previously stated. “I couldn’t say no to doing the record. When we completed the first few tracks, I found myself wishing I had written them. Not just the lyrics…just good heavy riffs and grooves really sucked me in. The melodies and words came super easy with this music. Even though it’s a whole different vibe it brought out a side of me I haven’t experienced since writing with Faith No More.”

Purchase/Stream Soul Pretender At Metropolis Records HERE Or Via

by Gerrod Harris on December 7, 2017
FOR CHUCK A DISCUSSION WITH CHRIS KNIKER OF PRIMITIVE RACE Chris Kniker will be the first to tell you that he is no rock-star. Rather, he is a man with a lifelong passion for music that has led to numerous opportunities ranging from journalism [...]

by Gerrod Harris on November 15, 2017
REMEMBERING CHUCK MOSLEY – A SPILL MAGAZINE TRIBUTE  (December 26, 1959 – November 9, 2017) In a statement from his family, it was announced that alternative rock pioneer Chuck Mosley had passed away on November 9th at the age of [...]
10