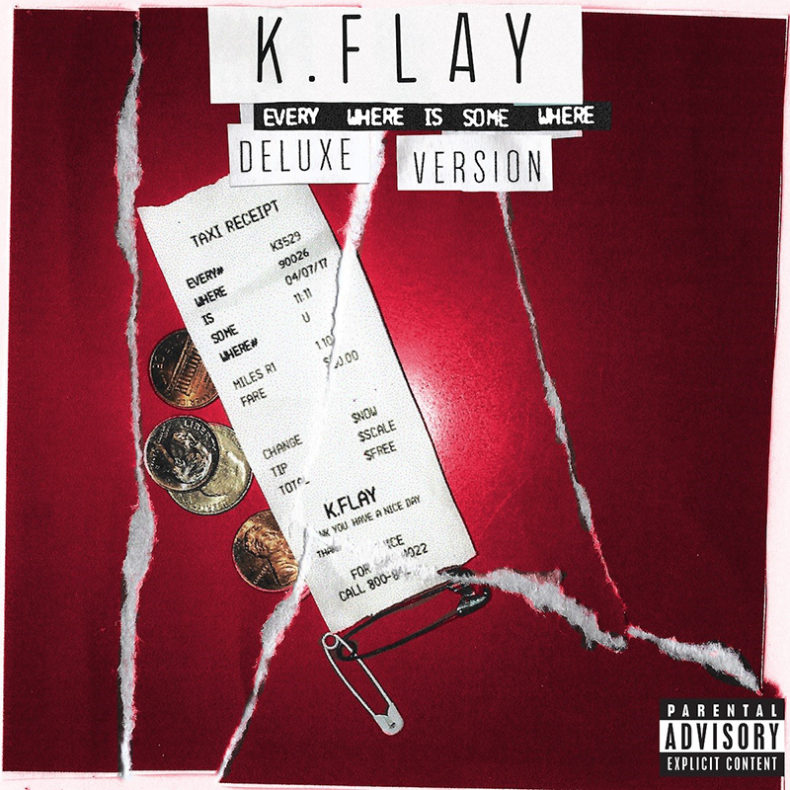 K.FLAY ANNOUNCES DELUXE ORCHESTRAL VERSION OF GRAMMY NOMINATED EVERY WHERE IS SOME WHERE – 2018 NORTH AMERICAN TOUR KICKED OFF LAST NIGHT – TICKETS ON SALE NOW

Fresh off two recent GRAMMY® nominations and just in time for the kick off of her 2018 North American Tour, Night Street/Interscope recording artist K.Flay announces a special Deluxe Version of her GRAMMY® nominated album, Every Where Is Some Where, including the ‘Seattle Sessions,’ 5 brand new orchestral versions of album tracks, “Blood In The Cut,” “Giver,” “Black Wave,” “High Enough” and “Mean It.” Check out this new live version of “Blood In The Cut” HERE. The Deluxe Version of Every Where Is Some Where is available digitally from today.

According to K.Flay, “the ‘Seattle Sessions’ are a reimagining of some of my favorite songs from the record, using live string, horn & choir sections. I worked with Budo, an old friend and an incredible producer, to bring the vision to life & I’m really excited for you guys to hear it.”

K.Flay’s GRAMMY® nominated single “Blood In The Cut” – from her Billboard No. 1 Heatseekers debut album “Every Where Is Some Where” – was a breakout hit, amassing over a quarter million track equivalent units in the U.S., according to Nielsen Music, hitting the Top 5 at Alternative Radio and spending more than 6 months on the U.S. Billboard Alternative Songs chart, peaking at #4. The song was certified GOLD in Canada and reached #1 in the Canadian Alternative charts. Speaking of her nominations, K.Flay said: “This is such an incredible honor. Thank you to everyone involved with the record — I absolutely couldn’t have done it without you.”

The Recording Academy will present the GRAMMY Awards® on Sunday, Jan. 28, 2018, live from Madison Square Garden in New York City.

In other news, K.Flay was recently nominated for an iHeartRadio Music Award in the Best New Rock/Alternative Artist category. The 2018 iHeartRadio Music Awards are set to take place on Sunday, March 11th at the historic Forum in Los Angeles, celebrating the biggest songs and artists heard throughout the last year across radio stations nationwide and on the iHeartRadio app.

The first leg of K.Flay’s recently announced 2018 North American headlining tour, which continues to sell out, kicks off tonight in Santa Ana, California. The Every Where Is Some Where Tour takes her to Los Angeles, San Francisco, Seattle, Portland, Vancouver, Chicago, Nashville and more. She will be joined by Sir Sly and YUNGBLUD as support.

K.Flay will also be touring across Europe with Imagine Dragons for their European leg of the EVOLVE World Tour, as well as a number of her own headlining shows in including dates in Berlin, Copenhagen, St. Petersburg, Moscow and more. For a full list of tour dates see below.

Last year, K.Flay released her debut album “Every Where Is Some Where” which debuted at #1 in the Billboard Heatseekers Chart and boasts powerful tracks such as “High Enough,” “Blood In The Cut,” “Black Wave” and her current single “Giver,” which continues to climb at radio. Watch the inventive new lyric video for “Giver” HERE.

In support of her critically acclaimed release, the Illinois-born, Los Angeles based artist has made late night television appearances on NBC’s Late Night with Seth Meyers and TBS’ Conan and has received critical praise from The New York Times and Pitchfork thanks to her fearlessly detailed lyrics and socio-political commentary. “Every Where Is Some Where” (released April 7, 2017) is her most deliberate and dynamic work yet, and is a thrillingly vital album that channels the frenzy and anxieties of today’s world but ultimately exhilarates.

Be sure to catch K.Flay on any of the following dates. More details can be found at www.kflay.com.

K.Flay
Every Where Is Some Where (Deluxe Version)
(Night Street/Interscope)
Release Date: January 12, 2018

K.FLAY EVERY WHERE IS SOME WHERE TOUR (NORTH AMERICA)

SPILL NEW MUSIC strives to keep our readers up-to-date with new releases by your favourite artists, keeping you informed of new album, single, and video releases. Stay tuned -- who knows, you might just discover your new favourite band.
RELATED ARTICLES
every where is some wheregrouplovehigh enough

SPILL ALBUM REVIEW: K.FLAY – EVERY WHERE IS SOME WHERE