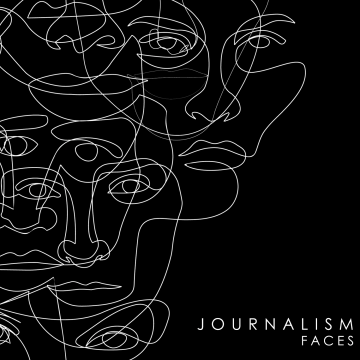 Brooklyn’s Journalism are set to release their full length debut, Faces, due out March 4th via Dead Stare Records. The quartet’s long awaited debut is an exciting record that blends boisterous indie rock, fuzzy krautrock, reverberating post-punk, and big hook-fueled pop songs to create anxious and contemplative art-pop that shines in the darkness.
“Faces I” finds Journalism embracing a motorik beat and an undeniably hypnotic groove that resonates among the band’s finest work to date. The song’s lyrics playfully highlight the falsities of the rock and roll illusion, especially in “current times” as Journalism’s Kegan Zema sees it. Discussing the single, Zema shared:

“I wrote much of the lyrics to this song about things we were feeling at the time as a band. Issues ranging from self-doubt and branding, to gear malfunctions are discussed in the opening lines. The minutiae are brought to the forefront of the driving beat — we are moving toward something. The chorus features the snarky and nearly indecipherable lines “Playing rock and roll / No one hears the words” cascading along with the guitar line. It highlights the stark but prevalent dichotomy of pouring emotion into your work only to blast it out inside tiny venues. Still, as the narrative continues, the character resigns themselves to the life they’ve chosen, feeling fated to pursue artistic endeavors despite the anxiety associated with it.”

While there is irony in a band calling themselves Journalism, don’t confuse it with today’s increasingly popular tongue-in-cheek cynicism. With their debut LP Faces, Journalism frontman (and former journalism major) Kegan Zema investigates the very nature of being in a band. What does it mean to make guitar rock in 2016? How do you stay afloat in a place as overflowing with bands as the Brooklyn DIY scene? Why do you stress so much over something you are privileged to even be able to pursue?

High school friends Kegan Zema and Owen Keiter (bass) formed Journalism in 2012 with NYU classmate Brendan Mehan (drums) and friend Dara Hirsch (guitar). After releasing their 1324 EP in the summer of 2014, the band maintained an aggressive schedule of shows that included an opening spot for Wild Nothing as part of Converse’s Rubber Tracks Live series and a northeastern tour.

Now, Journalism is releasing Faces, an 8-song effort that finds the band expanding on the lyrical themes and sounds of 1324. Lush yet gritty, the tracks feature a pounding urgency that underscores the anxiety of figuring out just what the hell you’re supposed to be doing with your mid-20’s. “You’re close enough but you can’t taste it / ‘Cause you’re so bored from all the waiting,” sings Zema at the close of the album.

by Josh Whitworth on August 16, 2019
Swampboots Defeatism! Dead Stare Records What do you expect when you hear of a band with the name Swampboots? I expected a southern rock band initially, but you don’t get that at all from [...]
8.0

by Ryan Sagadore on March 4, 2016
Journalism Faces Dead Stare Records Trying to break out and be noticed in a music scene is never easy, especially if that city is Brooklyn, whose scene is so dense that it is nearly impossible. [...]