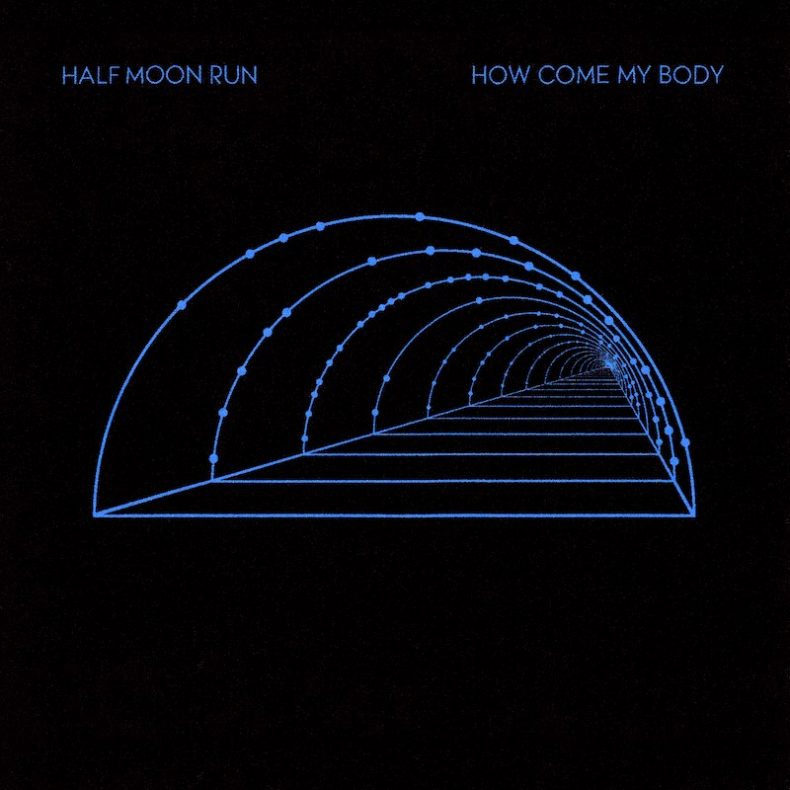 HALF MOON RUN – “HOW COME MY BODY”

When you consider everything Half Moon Run have accomplished and achieved and gained and lost in their 10 years together, the past decade may as well have been a century. Born between revolutions: B.C natives Conner Molander and Dylan Phillips connected with Ottawa expat Devon Portielje in the Mile End a few years after Arcade Fire had put the city on the international indie-rock map, and just before the trio’s fellow jam-space tenant Grimes would usher in a new chapter of Montreal DIY lore.

Half Moon Run forged a singular sound that looked beyond Montreal’s past and future toward the realm of the timeless. Theirs is a sound that inspires all sorts of colorful, contradictory descriptors—folk music for the modern dark age, art rock for harmony-pop enthusiasts, rustic indie anthems for neoclassical heads—but no matter what you call it, the physical and emotional responses among listeners is always the same: heartbeats accelerate, goosebumps rise, eye sockets well up.

Today, the trio who were just nominated for the 2021 Juno Awards in the Group Of The Year category and the 2020 Juno Award winners of the Adult Alternative Album of The Year (for A Blemish in the Great Light) – reveal new music by way of a dreamy single for “How Come My Body” with accompanying video directed by Sacha Roy that reminds us of the undeniable chemistry found at Half Moon Run live shows, and what hugs used to feel like when we could freely offer them to each other. “This song treats the body as a foreign entity, disassociated from and observed by the mind.” says Devon. “How Come My Body” serves as a first listen to brand new music confirmed to be released by the band, later this year.

Conner continues with his recalling of origins of the song, back in 2010 with scraps of written notes and an acoustic guitar line as he struggled to feel comfortable in his own skin. “I remember feeling confused and uncomfortable as a 20 year old, and I find myself feeling sympathy for that younger version of myself now. I also feel sympathy and concern for people living through that metamorphosis between adolescence and adulthood in the modern world – perhaps some of you reading this now find yourselves in such a situation. Or perhaps some of you can think of loved ones that fit the description. Or maybe, like me, you can remember the days when you were struggling to come into your own. Well, we’d like to dedicate this song to all those people – wherever you may be.”

Half Moon Run released their debut album, Dark Eyes in 2012. That album’s pulse-quickening lead single, “Full Circle,” galloped up the alternative charts in Canada, a U.S. deal with Glassnote Records landed them in the upper reaches of Billboard’s Heatseekers list, while steady BBC airplay lured the group overseas and into the welcoming embrace of Mumford and Sons’ Ben Lovett, who signed Half Moon Run to his Communion label in the UK. Then came 2015’s Sun Leads Me On and 2019’s A Blemish in the Great Light.  Half Moon Run’s meticulous ethic has consistently worked to their advantage, as the group has continued to expand its reach with each release while its sound has blossomed in unexpected ways. Embracing both the surface sheen of ’80s yacht-rock and the intricate song structures of prog rock, A Blemish in the Great Light was Half Moon Run’s highest charting release in Canada to date (debuting at No. 3) and landed them their first Juno Award for Adult Alternative Album of the Year.  They followed with the Seasons of Change EP last year (a collection of leftovers from the Blemish sessions) and their popular Covideo Sessions series on YouTube, where the band reworked selections from their back catalogue in split-screen virtual jam sessions, with each member performing their parts in isolation at their respective homes. The results were eventually compiled on the namesake 2020 EP.

“I’m proud of the fact that, as we live and grow, we’re able to continue to make music that evolves and changes and seems to be meaningful,” Conner observes as his band, Half Moon Run, crosses the 10th-anniversary mark. “It’s not like we found a trick and had a successful album because of that trick, but 10 years is a long time to be with a group of people doing creative work. You have to keep on allowing yourself to change and grow… and leave things behind.”