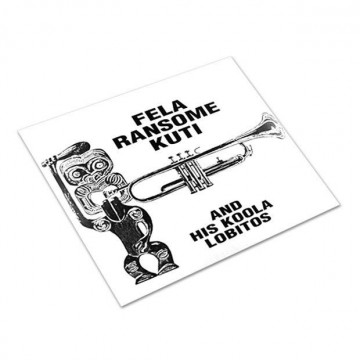 Fela Ransome Kuti is best known as the revolutionary pioneer of Afrobeat music. Born in 1938, Kuti spent his life as a trailblazer creating incendiary music and furthering radical politics. At the beginning of his musical career in the early ’60s, Kuti formed his first band, Koola Lobitos. Koola Lobitos were the first expression of Kuti’s incredible talent, the start of his musical evolution that led to the Afrobeat movement. As such, Knitting Factory Records is reissuing Highlife-Jazz and Afro-Soul (1963-1969), a collection of recordings that provide unique insight into the beginnings of Kuti’s craft. This three-disc set lays bare Kuti’s genius experimentation, honing his instincts while trying out new styles and combinations.

The musical style called Highlife first started in Ghana in the early part of the 20th century and spread throughout West Africa over several decades. Highlife melds elements of traditional African music and Jazz into an upbeat, danceable genre. One could understand Kuti’s attraction to the mix of Jazz structures, syncopated guitar lines and off-beat drums.

Kuti’s Koola Lobitos became a popular dance band in his native Lagos, Nigeria, recording many singles for local labels, Parlophone, Phillips and an album for EMI. The tracks on these recordings evolve from Highlife to soul to hints of what would become Afrobeat. The listener is able to witness the startling evolution of a man intent on finding his own voice and style. The collection encompasses three discs with Disc One focusing on singles, Disc Two on the album recorded for EMI and Disc Three on live and other recordings.

The liner notes, written by Michael E. Veal, Assistant Professor of Ethnomusicology at Yale University, point out: “The release of this collection of Fela Ransome-Kuti’s pre-Afrobeat music is a major event for fans of both Fela’s music and African popular music in general. Many of these recordings…were thought to be lost forever and certainly, were unknown to all but the most fervent Fela enthusiasts. Even these enthusiasts had to endure low fidelity tapes that had been copied over innumerable generations, from original recordings that were not themselves of the highest quality. What little has been known of Fela’s highlife period has been largely due to the efforts of Mr. Benson Idonije, Fela’s early manager and long-time proponent of his highlife music. With the recordings’ sound quality now much improved, this comprehensive collection gives an overview into a period when one of Africa’s finest musicians was attempting to find a style of his own. Thanks to the efforts of dedicated record collectors who assembled this compilation, a crucial and fascinating chapter of Fela’s career is finally available to African music enthusiasts around the world.”