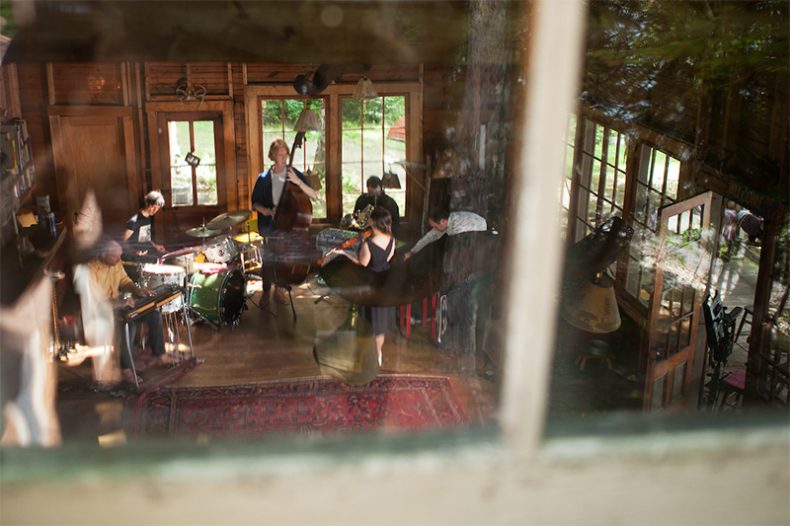 This album segment is another beguiling rumination bringing further focus and context to a record that leans on the collective’s individual talents to make a fascinating whole. Harnessing elements of the classical with the thrum of electronics, the avant-garde Montreal outfit further their claim as one of the most innovative, with House Music a field study in improvisation and sonic sculpturing.

House Music, an immersive ecosystem of an album finds its roots in improvisation, exploration and collaboration. With the legacies of improvisation-exploring greats like Talk Talk, The Orb, Bitches Brew-era Miles Davis and the late Ennio Morricone in mind, House Music captures the impulsive, connective, mysterious poetics of musical invention happening in real-time. Both the album and this rich visual counterpart, unfold as one long piece — a recorded-then-sculpted improvisation that vastly expands their work, coalescing classical and electronic instrumentation in the creation of genre-defying musical worlds.

While edited and trimmed, and occasionally added to, the album itself is in large part the original recording — with the broad structure of its movements kept intact. This single piece of music — written almost entirely as it was being recorded — emerged with no parameters beyond the inclusion of a short harmonic loop Parry had brought in as a starting point, which coheres and propels the album as it moves forward through the birth; vigorous, unrestrained growth; and ultimate slowdown of the musical ecosystem it creates. What the band generated is an album that lays bare the contours of a lived musical moment.

“If you sliced away the front wall of the house and looked in, you’d see the horn section — with so many different things going on — down on the first floor of what would normally be the living/dining room, and it was full chaos with tables and tables of kalimbas and harmonicas and synthesizers and horns. Then you travel up a floor, and there’s me and Richie in an empty, warm sounding wooden bedroom. Mike was on pedal steel in the bathroom, on the same floor as us. And then up the stairs, through the ceiling and in the attic, was Stefan, alone on drums. It’s a big piece of land, and if you went outside to take a break, you’d look over and hear all of this crazy shit coming out of all the different floors, and it filled this valley, and there were lots of rocks so the sound would bounce around. It was spooky and glorious”, says Sarah about the recording process.

“Most of my favorite recordings have some element of an explorative and accidental feeling within the music, a feeling which reflects the truth of musical minds which are partially super focused on specific musical ideas and partially wandering, exploring the musical world surrounding those ideas,” says Parry. “I think it’s really satisfying as a listener when you can hear a musical mind exploring an idea — not just a musician who has pre-formed an idea and rehearsed it 100 times until it’s totally perfect and ironed out. In this recording, every one of the six of us is simultaneously exploring our own ideas, deeply listening to each others’ wide open minds and also totally immersed in our own strange and beautiful little internal musical worlds.”

House Music will arrive in its full glory on March 19.