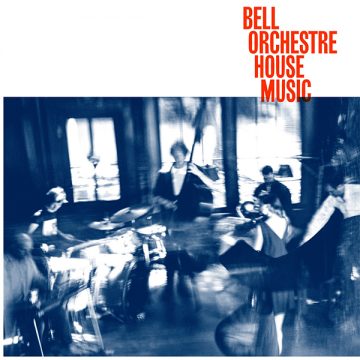 House Music is the first full-length release from Montreal six-piece Bell Orchestre in over ten years, and what a glorious return it is! Energetic and beautiful, this slice of improvised music mixes bubbling electronic manipulation with organic instrumentation, taking the listener on an amazing journey.

Recorded over two weeks in a remote house in Vermont belonging to violinist Sarah Neufeld, the band members set up in a different room in the house with their instrument, each room equipped with microphones in order to capture every nuance. It’s a very unorthodox way of creating an album but it works. Amazing to me is that House Music is an entirely improvised session consisting of a 45-min slice of a 90-min recorded piece.

The album bursts into the room with a strange electronic sample that sounds a bit like a musical hiccup and clearing of the throat, commanding the listeners presence and winding its way throughout the entirety. From there House Music finds its footing quickly as the first few steps transform into majestic wings spread wide, soaring high.

It’s difficult to find suitable words to describe this album. There is a chaotic beauty to it but it’s held together so well. At times the brass sounds like it’s going to blow the roof off the place, while the rhythm keeps chugging along, most impressive is drummer Stefan Schneider who keeps the energetic pace going throughout the entire affair, offering up beautiful fills and seamless transitions as the musical energy shifts.

The moods that are evoked for me are uplifting, mysterious, and full of colour, at times almost feeling as though I was wandering through an open-air market in ancient Marrakesh and at other times, such as my personal favourite,  “Movement”, feeling as if I was running through a rainforest at dawn. These songs truly feel as though they are playing host to ageless spirits and timeless history.

While it took over ten years for Bell Orchestre to produce new music, the time away hasn’t been in vain. The band have grown as musicians and human beings and clearly the connect and energy between them hasn’t skipped a beat. Beautiful, odd, and energetic as hell, House Music is truly something special.

It took the recommendation of a best friend to get me into the pages of music magazine writing. Armed with the deepest appreciation for all the music, a ridiculous sense of humour, and the apparent ability to string a few words together, these fingers started giving. Who knew it would become one of my favourite things many years later and that I'd enjoy seeing my works published the world over?!
RELATED ARTICLES
album reviewalbum reviewsbell orchestre
7.0