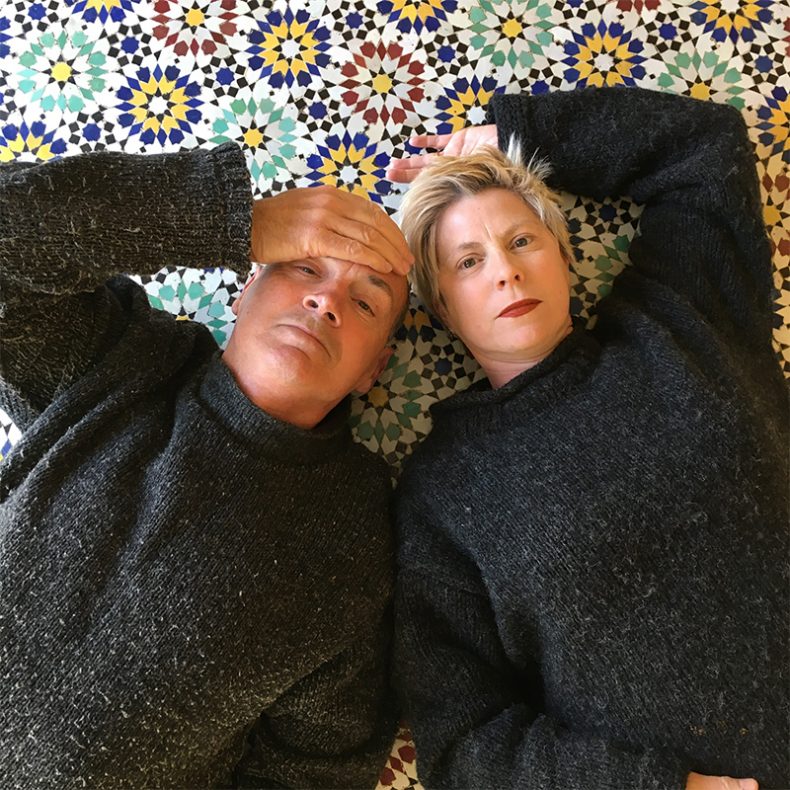 Some producers leave an unmistakable mark on the artists they work with – in part due to their sheer love and involvement in this music, but part also due to their profoundness, dedication, superb taste and superior guidance. Legendary UK producer Tim Friese-Greene falls into this category, so it is our pleasure to present his new music project Short-Haired Domestic with vocals by musician, songwriter and wife Lee Friese-Greene.

“A Song In Spanish Addressed To Men Who Drive Big Cars” is the second single from the eponymous Short-Haired Domestic album, which will be released in autumn. This follows up debut double A-side single ‘A song in Latin… A song in Hindi…’.

Best known as producer and unofficial member of Talk Talk, but also for his work producing Catherine Wheel, Lush, Thomas Dolby, Sidi Bou Said and Firefly Burning. Friese-Greene “renowned for his unerring sense of atmosphere and nuance, Tim Friese-Greene was among the most innovative — albeit under-recognized — producers of his era” (AllMusic).

After 1995, he shifted his primary focus to creating music as a solo artist, issuing various releases under his own name and as Heligoland.  Short-Haired Domestic is the next step in a logical progression for this producer.

Lee Friese-Greene was a member of early 90’s London Riot Grrl band Sidi Bou Said. 20-odd years was pre-occupied with parenting, teaching, doing up houses, and dabbling in music, including performance of back vocals for Tim’s projects. More recently, Lee is the songwriter, lead singer and guitar player for Devon-based band Pavlova.

Lee explains the background to this song:

“It’s bothered me for some time, this questions about why men think they will impress or pull women because they have a big, expensive car. I honestly don’t get it. To me it is about the least sexy or attractive thing a person could own. But yet it persists: the advertising may have become more nuanced but it’s still the same message. Anyway, that was mulling around my mind when the whole #metoo thing kicked off – the Harvey Weinsteins & the Trumps of this world who live under this assumption that money and power and big cars, will get you sex.

So this song is about that. Only women are in the driving seat now. And we will call them out. We know that their big cars are just thinly veiled substitutes for their inferior manhoods and complete lack of soul, empathy and humanity. We call time on that. It’s about karma; ‘Todos tenemos lo que merecemos’ – we only get what we deserve.”

Each track on the new album features vocals in a different language. At their heart are a breakbeat loop, sampled fragments, scratching, insistent funk and Latin rhythms, surprising appearances of acoustic guitar and just about every sound that’s possible to wring from a WASP synthesizer.

The result is melancholic and driven with a pop edge and sensibility. Avoiding any whiff of ‘divaness’ in the vocals, these songs instead allow emotion to be largely generated by the music as a response to the lyric.

“A Song In Spanish Addressed To Men Who Drive Big Cars” is out now, available via Bandcamp at https://short-haireddomestic.bandcamp.com/track/a-song-in-spanish-addressed-to-men-who-drive-big-cars. Later this summer, the duo shall release their debut eponymous album on vinyl and CD, as well as digitally across the main digital platforms.

Songs written and performed by Tim and Lee Friese-Greene
Recorded and mixed at The Hold, Totnes
Mastered by Caspar Sutton-Jones at Gearbox Records and
Steve Kitch at Audiomaster
Sleeve artwork by Left-Bridge.co.uk
Calcium Chloride CaCl 010

Also enjoy the video they released last week for their debut single, produced by Dylan Friese-Greene with Jake Friese-Greene as camera operator: