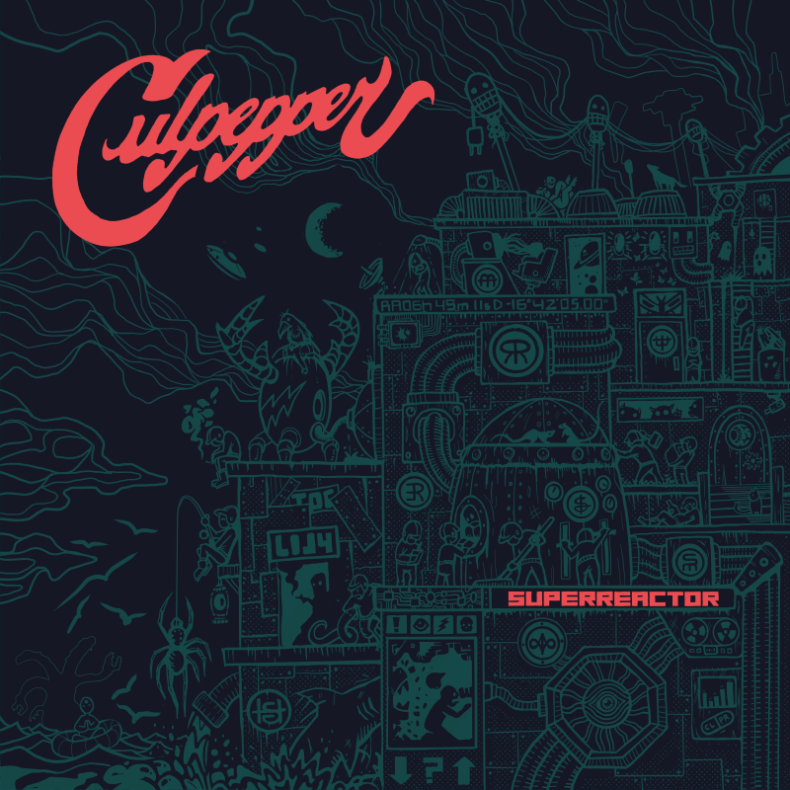 You could be led to believe that life is nothing more than an endurance test to see how much pain we can handle before the brain and heart just give in.

Certainly, we’ve all endured a wealth of pain in recent years. Culpepper songwriter and singer/guitarist/keyboardist Paul Leslie Culp perhaps more so than others, but he’s turned it into beautiful and heart-wrenching music. And into something new.

The recently launched Portland, OR quartet Culpepper features Culp with his son Max on drums, along with bassist Joel Wasko and former Starlite Desperation guitarist Dana Lacono. Their sound is a psychedelic, indie-rock storytelling with a flair for the dramatic. The band’s 8-song debut Superreactor is reminiscent of the saturated romanticism of Echo & The Bunnymen with the evocative, world-weary lyrics of Lee Hazlewood or Bill Callahan, and hazy psych-perimentation of Dandy Warhols and Spoon. The road to Superreactor wasn’t easy.

“Superreactor is a pandemic baby,” Culp says. “Before that we were working on a specific set of songs, hoping they would be the backbone of our first album, when a series of disasters completely derailed it. My marriage of 20+ years ended, completely obliterating my home and upending my family. Then I lost several loved ones, including my dad. Max and I were on the way back from his funeral when they started talking about a potential lockdown. Then, isolated in my new tiny apartment I wrote a whole new batch of songs, which continued over the following couple of years. A lot happened in that time. Fires. Tear gas. Illness. Love. At one point I ended up in the hospital and had to take a 6-month break. The album is kind of an emotional/psychic map of that period.”

The album opens with the glimmering Morricone style tremolo guitar over pensive acoustic strums of “Big Bang” where soaring melodies set the stage for the song’s — and the album’s as a whole — dramatic tone. The title track takes a more fictitious approach to its subject matter, describing a power plant meltdown rendering the apocalypse, as Culp sings, “screeching of metal as I tore through the guardrail and away from the Earth/ I remember the words: Floor your heart to the end.” Elsewhere, “Plague Champagne” starts with a shimmering Hammond organ and slowly builds a lullabye melody reminiscent of Spiritualized as arpeggiated acoustic guitar notes fade in beneath the now chirping tremolo of the organ as Culp softly sings,” where are you going my bouncy little spoon? Angel hair and gummy bears and slowly healing wounds.” The album closes with the anthemic “Coming Awake,” which bursts with a guarded optimism reminiscent of David Bowie’s “Heroes” as distant drums crash and boom, a walking bass line sets the song’s veering course and Culp succinctly caps the album with the hopeful aphorism, “the more it hurts, man, the better it tastes.”

Superreactor was recorded and mixed by Paul Leslie Culp and Dana Lacono at The Day Theater in Portland, OR. The album is available now for download and streaming, with LPs due in Fall 2022.