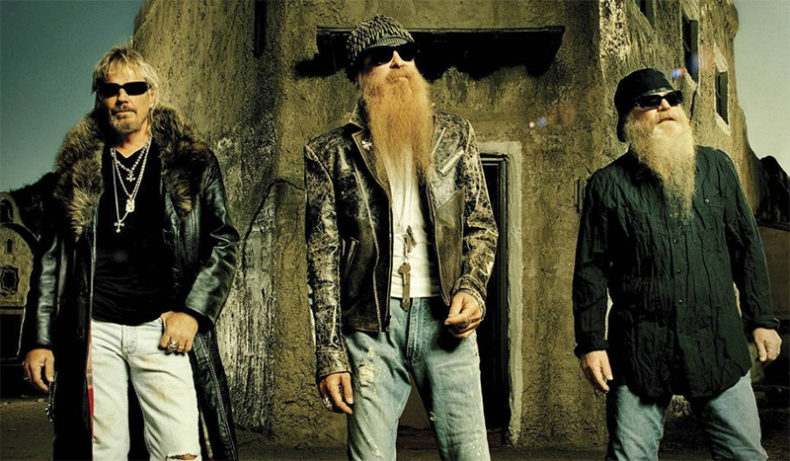 Despite being around since the late sixties and just being slightly older than myself, I have never previously crossed paths with the band in a live setting. True like most people my attention was attracted to them for the first time in the MTV era of the eighties where their videos containing cars and pretty ladies thrust the band to the forefront and ensured long overdue commercial success. The band also rarely venture to UK shores, so it was thus that I was finally able to cross another band off my ”must see live” bucketlist. Rescheduled from the larger Arena which remains closed, the band would be plying their live wares in the considerably smaller capacity Apollo.

Easily recognizable by their trademark facial hair and the other guy named Beard, the band appeared just slightly later than originally scheduled. Opening with “Got Me Under Pressure” from the aforementioned Eliminator album, what instantly struck me was that there were clearly some tech issues with Gibbons lead vocals, and also the guitars were lacking an element of crispness and sharpness. They followed up with a couple of tracks from their Tres Hombres album which recently celebrated its 44th birthday! Following the running order on the original album, the band played a rapid “Waitin for the bus” and “Jesus Just Left Chicago”. Dipping in and out between the commercial hits of the Eliminator album with dirty bluesy early material, the band quickly engaged a passionate audience of fans.

Crowd interaction was kept to a minimum as the band preferred to let their music do the talking. No spectacular stage effects, just minimal lighting and no video screens. The only outward signs of special effects were minimalistic — the legendary guitars with fur and suits with inlaid lights. Rather than possibly distract from the band, this helped the audience to focus on the stage and just the songs being played, in what was a masterclass of simply playing gritty sounds deep from the heart of Texas. Gibbons virtuosity of his instrument shone brightly throughout the show itself. While I had obviously heard just how talented he was, it was an absolute delight to actually witness his ability up close and personal in what was a relatively intimate performance from the band who usually play in much larger arenas. I had heard from chatting to some die hard fans pre show, that the band generally play a short set. However I did feel that the presence of five, yes five cover versions in the set, tended to disrupt the flow. No sooner than the fans were up and enjoying the original number,s that then the tempo significantly dropped when the band switched to playing an obscure cover version. This was my only criticism of the show itself.

My first viewing of the boogie legends was a very enjoyable one. Yes, I did have issue with the excess of cover versions in a pretty short set. However, that minor gripe aside, the majority of the audience definitely appeared to have had a great time.

I'm a 40 + music fan. Fond mostly of Rock and Metal my staple-musical food delights. Originally from Northern Ireland I am now based in the UK-Manchester. I have a hectic musical existence with regular shows and interviews. Been writing freelance for five years now with several international websites. Passionate about what I do I have been fortunate already to interview many of my all time musical heroes. My music passion was first created by seeing Status Quo at the tender age of 15. While I still am passionate about my Rock and Metal I have found that with age my taste has diversified so that now I am actually dipping into different musical genres and styles for the first time.
RELATED ARTICLES
live reviewmanchestero2 apollo