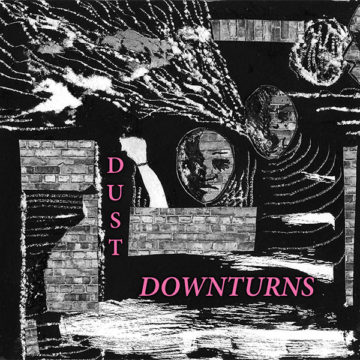 Brampton, Ontario based indie/post-punk band Downturns formed in 2014 and have released their second EP Dust. The lead vocalist James Murray’s voice lunges with pleading emotion and with a scatter like a ‘50s do-wop band. Tracks like “Identity Crisis” and “Heel” showcase the best musical efforts by the drummer Matthew Spence, whose clicks and tangs can be heard throughout these songs. “Heel” is the key track on this EP. It has an identifiable riff with the most solid beat out of all four songs, and it has one liner lyrics that a crowd will be able to yell along with.

As for the lyrics, they’re very much a downer. For example, “Failure waits for its chance” in Identity Crisis and “You’d rather drown than call for help” in “Living in the Wake”. But the Downturns are knowledgeable of this as noted on their Bandcamp page which states, “fresh sound using depressing and harsh structures”. They’re like a collection of one liners that sound like they’re supposed to belong in an indie/post-punk band. It doesn’t matter though, because the lyrics don’t seem to be a focal point in their style so it’s not a total downer to listen to. They say they’re “dance-punk” after all! So you can bob around while talking to yourself in a self-deprecating manner. Downturns are just beginning, so there is potential here.

Vicki Mahony is taking her hobbies of concerts, photography, and ranting and putting them to good use! She is a live-music photographer and reviewer.
RELATED ARTICLES
album reviewsbramptondust
8.0