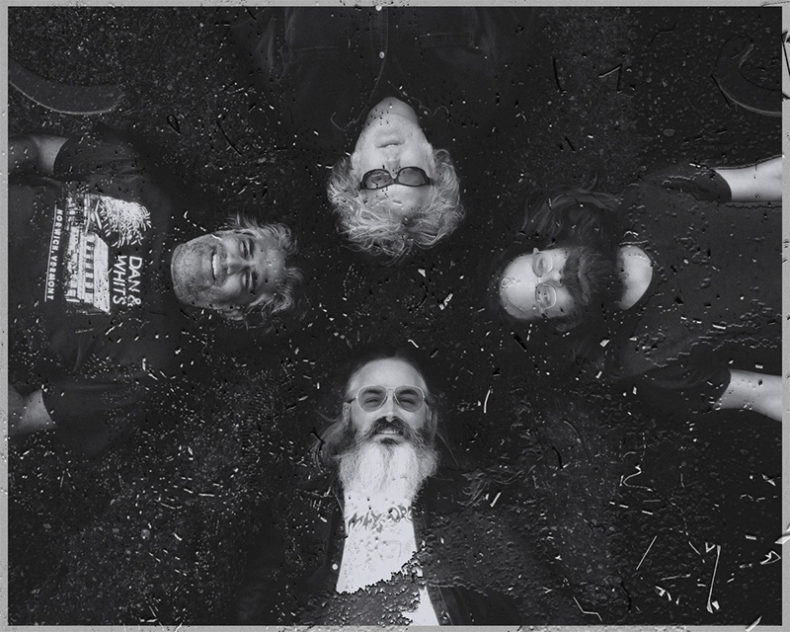 Banging out blissful music against an ever-shifting psychedelic light show backdrop, Wooden Shjips plays a spellbinding show at the Horseshoe Tavern. Neither the band nor the audience seems to be physically engaged – the band never stops between songs to address the crowd while the audience is a sea of head-bobbing and toe-tapping, casual and detached – yet by the end of the show everybody is fully immersed in the sweeping music and the powerful visuals.

Holy Wave and ZONES open, setting the stage with a kaleidoscope backdrop and raw psych-rock tunes. Holy Wave weaves cascading melodies, the music somehow sounding simultaneously like an expression of euphoria and panic. Their setlist includes songs such as “Adult Fear”, “Western Playland”, and “Son of Sound”. Oscillating between bursts of throbbing sound and pockets of mellow tinkling, each song is a slow escalation into a maddening musical high. The hypnotic sensation of being lost amid sound and colour sets up Wooden Shjips’ show perfectly.

Wooden Shjips opens with the first track on their most recent album V., a frenzied, thumping song called “Eclipse”. The hazy ebb of sonic psychedelia wafting through the venue immediately pegs V., released May 25 of this year, as a perfect summer album.

The band then proceeds to rock the house – in their dreamy, mellow way – with songs such as “For So Long” off their album Dos, West’s “Flight”, and V.’s “Ride On”. The band plays the entirety of V.’s 8-minute single “Staring at the Sun”, its winding, repetitive melodies lending it a timeless quality. Transitions between songs are marked with the buzzings of nature, birds chirping among loud clapping and whooping. 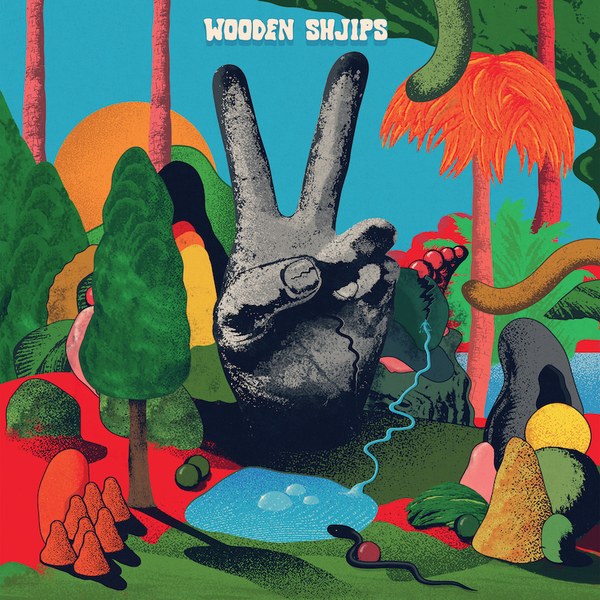 The music is reverberating and messy, but in a good way; notes bleed into one another and the result is static, soaring musical loops decorated with sustained high notes and fuzzy guitars. The backdrop lends an uncanny synesthesia to the experience, painting the music before your eyes and perfectly capturing the songs in blurred splotches of colour. A song with an urgent pulsing beat and wailing guitar is set to a spasmodic, blinking screen of television static punctured by jagged red scribbles. A slower, mellower tune is set to an aquatic backdrop of amorphous blue shifting patterns.

The long pockets of pure sonic chaos trap the audience in a bubble of stagnant, repeating rock riffs that make time seem slippery and irrelevant. Everything is tinged a neon blue, so despite the warm heat signatures and dancing polka dots lighting up the backdrop, the whole set has an eerie, dreamlike quality.

The last song of the set features colourful female silhouettes riding horses across the screen to Vol. 2’s “Death’s Not Your Friend”, with shrill synth notes dancing over a muted rock guitar. For the encore, Wooden Shjips covers Snapper’s “Buddy”, a go-to track for the band. After the show, a band member tells me that “Staring at the Sun” was his favourite track of the night, and talking to other fans after the show confirms that the crowd shares this excitement for V.’s new single. He then tells me, “we love playing in Toronto…people are so nice in Canada”. Let’s hope that means Wooden Shjips will be coming back soon for another mesmerizing show!

Isabel is an English major at the University of Toronto, and spends most of her time reading books, listening to punk rock music, and writing for anyone and everyone willing to read it. Raised in Toronto, her somewhat eclectic music taste has been shaped by a healthy mixture of mosh pits and Mirvish musicals. She thinks live music is the highest form of entertainment.
RELATED ARTICLES
holy wavelive reviewthe horseshoe tavern
8.0