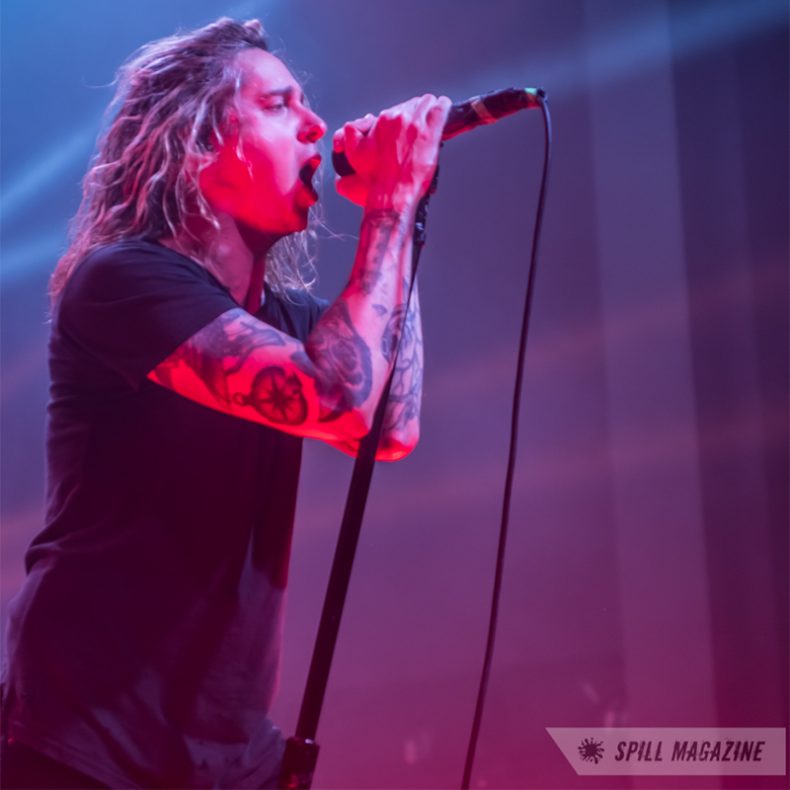 Stray From The Path took the stage and ripped open the night with their brand of hardcore/punk/metal. Intense and in your face just does not do this band’s energy and stage presence justice. They were the perfect primer as openers for this tour. They played seven hard-driving songs from their 10-album catalogue, including socially-conscious songs “Goodnight Alt-Right” and “Badge & A Bullet”. Lead singer Thomas Williams ricocheted back and forth across the stage while amping everyone up. “Guillotine” was a favorite amongst the crowd. Keep an eye and ear out for Stray From The Path; expect to see more from this quartet as they earn fans and climb the ranks of the touring and festival circuits.

Bad Omens joined this tour in support of their newest album, The Death of Peace of Mind after the previously scheduled act Every Time I Die dropped from the Voyeurist tour early on. Frontman Noah Sebastian enchanted the crowd effortlessly while donning all black slacks, turtleneck, gloves and wool overcoat before ditching it later in the set. The uniformed wardrobe is a welcomed style departure from the stereotypical metal scene fashion that visually sets them apart from the pack. The quartet played a tight seven songs including ”Limits” from their Finding God Before God Finds Me album and more recent singles “Like a Villain” and title track “The Death of Peace of Mind”. There is no doubt that Bad Omens with their catchy riffs, mesmerizing lyrics, and unique stylings are rising stars with potential to spare.

A dark figure took the stage in all-black and a voice-reactive LED mask. Under the light of a single spot, the figure led the crowd in a simple, mindfulness exercise encouraging the concert goers to live in the moment just before Underoath melted our collective faces. Tampa Florida’s own embarked on their full-fledged headlining tour in support of their ninth studio album “Voyeurist”. This six-piece thoroughly enjoyed their time on stage and reveled in each and every moment. Underoath’s set felt like it moved incredibly fast for a 15-song set. They dropped their newest single “Hallelujah” in slot six, instantly rejuvenating newcomers, then broke into “No Frame” with a well-choreographed percussion and programming transition. Throughout their time seizure-inducing strobes, multi-colored back lighting and large LED panels made for a visually stimulating set that stands out from most up and coming metal/metalcore/hardcore bands that seem to embrace the darker side of the spectrum. Large beams of concentrated light streamed through raised hands and across the venue as Underoath handily traversed their catalogue of eight studio albums to play a cohesive setlist. Vocalist Spencer Chamberlain encouraged the fans into a frenzied circle pit but cautioned them to pick up anyone who falls. Underoath’s future remains unwritten but if their onstage enjoyment and ferocity is any indicator, Underoath is one to watch for as they garner more and more fans and attention.

Stray From The Path Photos

Stray From The Path Links

Scott was raised in southern Minnesota, attended the University of Wisconsin – Stout, spent some time abroad and currently resides in Minneapolis, Minnesota with his wife and their two daughters, only son and two dogs. Long time music lover and concert-goer, Scott has attended countless concerts and festivals since 1996. His fondest concert memories include meeting the love of his life at his first music festival. Sneaking into Linkin Park’s first Minnesota show. Hosting the second stage on the Projekt Revolution stop in Somerset in 2004 and pretty much every show he’s attended with his concert cohort, Scott. Yes, there’s two of them! As of late, Scott has started making memories and sharing his love of attending concerts with his children. Shinedown was his oldest daughters’ first show thanks to his cohort, The Interrupters was his youngest daughters’ first show. His son’s first show is still to be determined.
RELATED ARTICLES
bad omenshallelujahlive review