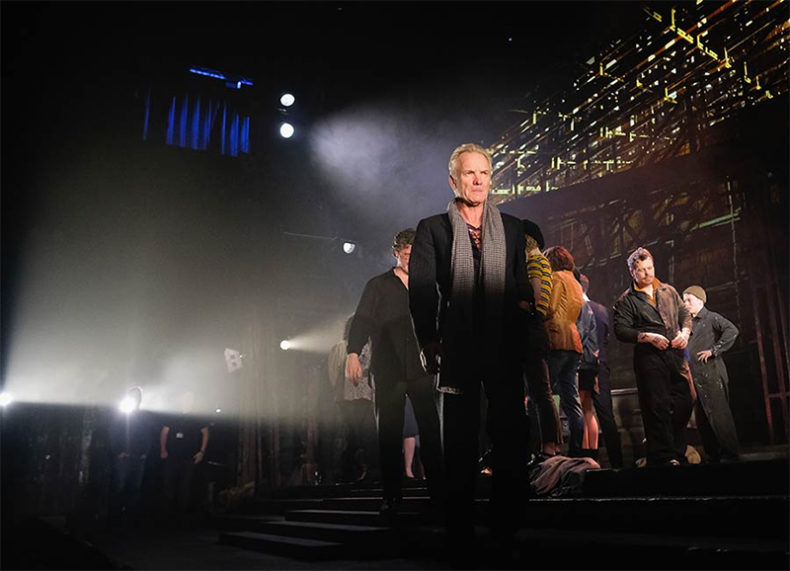 STING w/ THE CAST OF THE LAST SHIP

When it comes to pointing out injustice, Sting knows whereof he speaks, and sings. The 67-year-old native of Wallsend, UK witnessed first-hand, the demise of major industry in his home region, and its devastating results. The renowned singer-songwriter-actor saw parallels between the closing of the shipyard in his hometown, and the recent decision by General Motors to permanently shut down auto manufacturing in Oshawa, Ontario. In what was billed as a performance “In Solidarity With Oshawa Workers”, Sting brought the cast of his musical theatre show The Last Ship to Oshawa’s Tribute Communities Centre on February 14th.

The motivation was political, and the songs were powerful. As this was a union-sponsored event, the enthusiastic audience was welcomed by Unifor Local 222 president Colin James, and by national president Jerry Dias, who introduced Sting. Looking fit and relaxed, the former Police-man sat down and played a stark and stirring rendition of “Message In A Bottle” on acoustic guitar. Though it was similar to Sting’s earlier stripped-down versions of this song, this performance seemed particularly impassioned.

Sting then invited the cast of The Last Ship to the stage. The performers were introduced, and then proceeded to share select songs from the show. Dipping into his northern English “Geordie” dialect, Sting assumed his stage role of shipyard foreman Jackie White, leading the song “We’ve Got Nowt Else”. This was followed by the rousing ensemble number, “Shipyard”. Though these are modern, original songs, their structure and presentation are rooted in British folk, with lilting melodies, and strong, sing-able choruses.

Standout performances in this set belonged to cast members Frances McNamee and Sophie Reid. McNamee demonstrated her artful vocal prowess with the song “If You Ever See Me Talking To A Sailor”, while Reid gave a beautiful, energetic performance of “All This Time”. The latter tune was a hit for Sting in 1991, from his album The Soul Cages, which inspired him to write The Last Ship.

In addition to performing songs from the show, the cast played out a scene from The Last Ship, during which Sting gave an impromptu shout-out to autoworkers. It was a very poignant and emotional moment that hit close to home, and was met with huge audience response. The program closed with a full-cast version of Sting’s mega-hit with The Police, “Every Breath You Take”.

The reason for the event was never far from the performers’, or the audience’s minds. This performance was a gift to the autoworkers of Oshawa, but it was also used to shine a light on the issue of why companies pull up stakes, to the detriment of the local economy and people. As Sting stated in the press conference following the show, “We wanted to come here to express our solidarity and our support for the struggle. It’s quite uncanny, the parallel between what we’re dong onstage every night, and what we’re seeing today… We are telling your story, and it’s important that the story is heard. We are story-telling creatures, and the story is important. This can’t be buried under the political carpet.”

Of GM’s decision to cease operations, Sting comments, “I think you have a duty to support the community that’s worked for you. It should be a mutual support system. It’s about loyalty. These workers have loyally given their lives to the company. It’s a two-way street. You can’t just walk away.”

Many pundits and politicians believe this plant closure to be a done deal. However, the workers are unwilling to give up without a fight. While it may not change the outcome of this situation, the efforts of Sting and The Last Ship cast helped to lift some spirits in Oshawa, and provide some much-needed support.

Bryan Williston has been involved in music since he was a young child. A veteran singer, songwriter, and music educator, Bryan has enjoyed playing a multitude of musical genres in a variety of outfits, over the years. Bryan lives in Whitby, Ontario.
RELATED ARTICLES
live reviewoshawasting