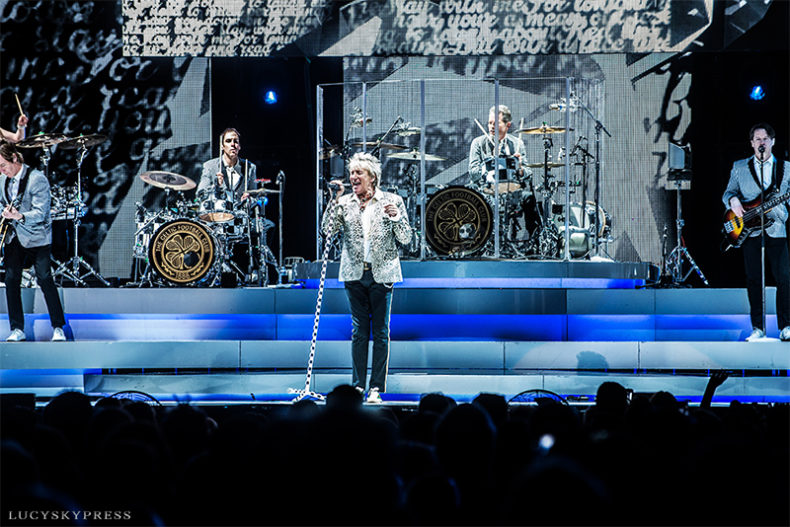 Rod Stewart’s show at the Canadian Tire Centre in Ottawa was a feast for the eyes, as well as the ears and the heart.

Moving through generations of songs with backdrops to match, emphasizing influential political and historical moments. Some stand out images on screen were Martin Luther King, Rosa Parks, and footage of Stewart from when he was being knighted – which featured the same boyish smile that was glued to his face through the show. He also spoke about his eight children keeping him young. Spread through his multiple relationships, the amount of children that he’s raised has kept him young, or he really does still genuinely love what he’s doing. “I’ve had another kid since the last time I saw you.”

To see a musician that has played through multiple generations so vividly fulfilled by performing is quite refreshing, as the job can become tiresome over the years and you see many older artists’ passion fade. While Stewart is still very much able to strut his stuff around the stage, he is 73-years-old and much of the crowd was of course in their later years, so mid-set, he did a sit down acoustic style set. “Rest yer bottoms please, my favourite part of the evening is when we get to sit down and pretend we’re the Eagles or something.”

The diverse assembly of talented musicians gave the evening some of its most memorable moments: incredible saxophone solos, beautiful harp playing by a largely talented multi-instrumentalist and backup female vocalist, a rousing drum instrumental featuring two drummers and a bongo player, great keyboards, fiddle/violins, stand up bass, banjo, and cello, on top of the standard dual guitarists and bassist. Stewart generously left the stage at times, to allow other musicians to have the spotlight and be the focal point of the show. It just goes to show how dedicated he is to helping to build other musician’s careers by truly showcasing their talents.

Moreover, he had the women all come up to centre stage and “introduce themselves, because they’re not just pretty girls, they’re absolutely talented musicians.” However, throughout the show, they changed outfits 4 or 5 times and all ensembles were very clearly made to accentuate their features and draw more attention to their bodies than their talent. As the women introduced themselves, one came up and spoke in French, which Rod followed by asking how many were of French heritage. Of course, being in Ottawa – this close to Quebec – there was a loud response. However, when Rod continued on to say “well, how many of you were actually born in France?” the loud response dwindled to near silence. The videographer clearly had a thing for the slender blonde woman, as she was on the screens he was controlling for the majority of the night.

Rolling through his many hits from his nearly 60 year career, Stewart played a nearly 2 hour set – with never a dull moment – even apologizing for being barely 15 minutes late to hit the stage due to technical difficulties. Skipping across the stage and changing his outfit and ‘blingy’ shoes multiple times, he was also very interactive with the crowd, telling tales of his earlier days and collaborations, as well as his travels. With a wardrobe like that, ending off the night with ‘Do Ya Think I’m Sexy?’ was a well suited way to draw the checkerboard curtain that was drawn around the stage. Hopefully this time, it doesn’t take long enough to produce another child for him to come back to Ottawa.

Do Ya Think I’m Sexy?

Live Reviews
canadian tire centredo ya think i'm sexy?downtown trainforever younglive reviewmaggie mayottawarod stewartsome guys have all the lucktonight's the night (gonna be alright)you're in my heartyoung turks
canadian tire centre, do ya think i'm sexy?, downtown train, forever young, live review, maggie may, ottawa, rod stewart, some guys have all the luck, tonight's the night (gonna be alright), you're in my heart, young turks
About the Author
Lucy Sky

Music makes the worst situations bearable and the best situations even better. I'm just here to share the inside scoop and anything you may have missed, while I establish my own voice in the industry. Born and raised in Ottawa, I never go anywhere without a set of headphones. Live music has been my vice for as long as I can remember and sharing stage side stories is a major bonus.
RELATED ARTICLES
canadian tire centreforever younglive review