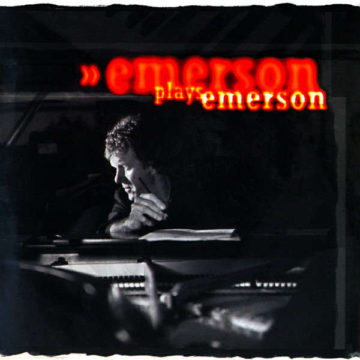 The music world lost Keith Emerson on March 11, 2016. What a huge loss it was. Many know him through his work with Emerson, Lake and Palmer, though he was also in The Nice, and Emerson, Lake and Powell. His solo efforts seem to have not been as widely known however. With the reissue of this brilliant album, Emerson’s family are looking to correct this situation.

The album, Emerson Plays Emerson was originally released in 2002 and was not the huge success it should have been. The album has been remastered in 2017, and thankfully for this reissue, Emerson’s family went back to the original artwork and packaging. It is a faithful reproduction of the original release, but it does sound much better. The music seems sharper and cleaner. Technology has changed in the last 15 years so much that even an album, as well recorded as Emerson Plays Emerson was, can be improved. This is in the same league as some of the work  on Frank Zappa reissues. It sounds great.

The album is an instrumental album, played mostly on piano. The synth is played here and there, such as the incredibly moving tribute “For Kevin”, a tribute he wrote for his friend and engineer Kevin Gilbert, which is simply beautiful. But for the most part, Emerson takes to the grand piano playing songs he wrote and some covers that he obviously loves — his take on Gershwin and Gershwin’s “Summertime” is brilliant.

Sometimes an instrumental album can lack focus and drift all over the place. Not here — Emerson Plays Emerson is a coherent album that plays like an aural painting. Emerson is able to paint scenes with his music, his piano playing, and his arrangements. He dipped into classical music often with E.L.P. and other releases, but here is able to embrace it among other styles.

This album shows a different side to Emerson, a side that he hinted at throughout his career, but did not bring out in the spotlight often, but when he did it was sheer brilliance. This album is an example of that. Fans may expect more prog rock, but given the chance this album will grow on the listener. It is art, pure and simple. This album demonstrates just how talented Emerson was, and his ability to write and produce such exquisite music is sometimes overlooked. Emerson, Lake and Palmer was an influential, brilliant band, but one should not overlook the solo outings by Emerson. Take the chance and discover a whole world of a variety of music. He crossed many genres, he does that on this album. It starts off classical and moves into ragtime, pop and jazz.

It is good to have this album out again. There are no bonus tracks, but that is fine. Bonus tracks do not always make a great addition. Here, the family wanted Emerson Plays Emerson to replicate the original issue of the album, and it succeeds.

This is a stunning album that deserved and deserves to be heard.

Born and raised in Whitby, Aaron discovered music through his love of The Beatles. This led to a career in radio, writing for various publications, and ultimately a radio show about The Beatles (Beatles Universe), which ran for over four years. When not immersed in music, Aaron enjoys spending time with the loves of his life -- his wife Andrea, and daughters Emily and Linda (all of whom have an intense love of music too).
RELATED ARTICLES
album reviewsballad for a common mancherry red
8.0