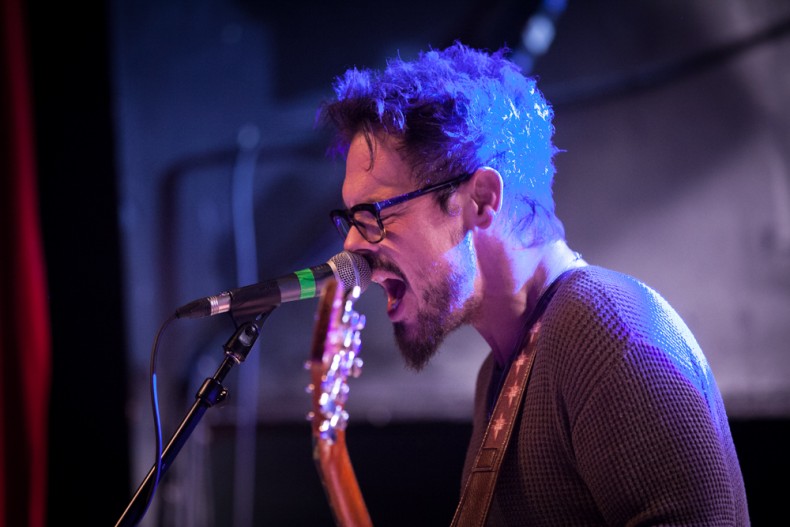 The Share Your Secrets Tour made its last 2015 stop at the Mod Club on Wednesday night. But fans can rejoice, as the tour will continue its Western Canada swing with the coming of spring in 2016.

It was difficult to move anywhere without bumping and spilling someone’s drink. The venue was crammed. It was almost completely packed by 8 p.m. and fans got to know each other very well in such tight quarters. They were certainly in a jovial mood. It might have been the eggnog, it might have been the beer, but more likely it was the smooth, hypnotic, soul-piercing performance.

The stage was adorned with a black backdrop. Front centre was the firefly that adorns the album art. It was pierced by what seemed like hundreds of little glowing blue lights, recalling the warmth of our Canadian summer nights. The stage also contained a few interesting items. The most recognizable was Molly. Thornley fans should be familiar with Molly through Thornley’s recent Facebook posts. “I find her to be quite bright,” he remarked on December 8, getting ready for the tour.

The red, busty mannequin, which morphed itself into a warm lamp and a strange stage ornament, stood proudly, never wavering from her duty to protect and serve. A close second was the sexy leg lamp, and the empty gumball machines.

There was no formal announcement before the show regarding an opening act so it was a pleasant surprise to be introduced to Chris Caddell (chriscaddellmusic.com), who was without his band The Wreckage, and performed a solo acoustic set. Some photographers and reviewers are often unexcited to take the time to cover these often-unsung heroes, but that is their mistake. Caddell was fantastic! He has a powerful, raucous voice, nimble fingers, and unbelievable rock n’ roll hair. He has all the makings of a fine blues man. Canadian great Colin James certainly thinks so, as does Ian Thornley. The crowd responded passionately to his performance. The song “Workin” received the strongest reaction. It has that sexy, foot-stompin’ rhythm, and deals with the aches and pains of the working life. Who can’t relate to that?

After a short break, Thornley entered the stage alone, guitar in hand, and set the mood for the evening. The stage was lit with sparsely dim lights, not unlike a chain on a Christmas tree. The stack of speakers was bursting with deep distorted bass, and the slow, subtle, muffled sounds of an electric guitar. I know this, because I was entrenched in front of those speakers, for my three songs, no flash!

My ears were physically tingling and my hands were trembling. It was like sitting in one of those coin-operated massage chairs at a mall.

After some time Dave McMillan on bass and Glenn Milchem on drums entered the stage and the trio began the evening’s experience. The Mod Club was full of faithful and loyal fans singing along to the relatively new material from Secrets. “Albatross,” from Big Wreck’s 2013 album by the same name, did however, receive a special ovation and fit perfectly into the set.

Thornley made small talk throughout the evening. He found himself musing that looking through the crowd, he knew so many people. He certainly played with tremendous passion this evening and this was a very special performance.

The night was not without some levity. Halfway through the set, and right after the great crowd pleaser “How Long” was finished, two boisterous fans asked Thornley how he was feeling. He answered politely, stopped, and then asked them “You guys are guitar dudes, aren’t you?” There was a brief pause, and everyone waited. Ian returned with two guitar picks but gave them a stern warning. “These are Shredder picks! They make you play so fucking fast, time will bend!” A lady in the audience begged for her very own pick, but she was humorously denied. “I’m sorry. These are not for fans. They are for guitar dudes,” he explained.

There was no weak song or moment in the whole set. There was also very little dead silence, which is cruel because I am sure some of the thirsty souls had to use the washroom at some point. “Frozen Pond” was my personal favourite, although “Feel” is my favourite track from Secrets. There was something dirty and funky about the live performance of “Frozen Pond.” It channeled some long forgotten jungle rhythm which was most pleasing to hear and witness.

The fans stayed to the end. There was no early exit this evening. No one was in a hurry to get back to their lives. In the encore, the audience was treated to a sassy version of Led Zeppelin’s “Gallows Pole,” and the night fittingly ended with Big Wreck’s “Under the Lighthouse.”

Western Canada is in for a good spring, and those of us in attendance can now have a wonderful Merry Christmas.

Grzegorz Kieszkowski originally hails from Bydgoszcz, Poland. After his father was released from prison in 1984, for his involvement with the Solidarity movement, Greg and his family escaped to Canada in 1985. He makes Cobourg his home, along with his wife and two small children. Greg is a graduate of York University, with a double major in English and Philosophy. Music has always been in his blood, and although his tastes have matured, he will always have a soft spot for the Metal days of the late 1980’s. He is a full time English teacher and a professional photographer. Part of the allure of writing is the possibility of conversation, and he would love to hear your comments and opinions. Please feel free to visit his personal website - grzegorzkieszkowski.com.
RELATED ARTICLES
chris caddellian fletcher thornleylive reviews

SPILL NEWS: BIG WRECK TO RELEASE COVER OF STING CLASSIC “RUSSIANS” | 100% OF PROCEEDS TO BE DONATED TO THE UNHCR