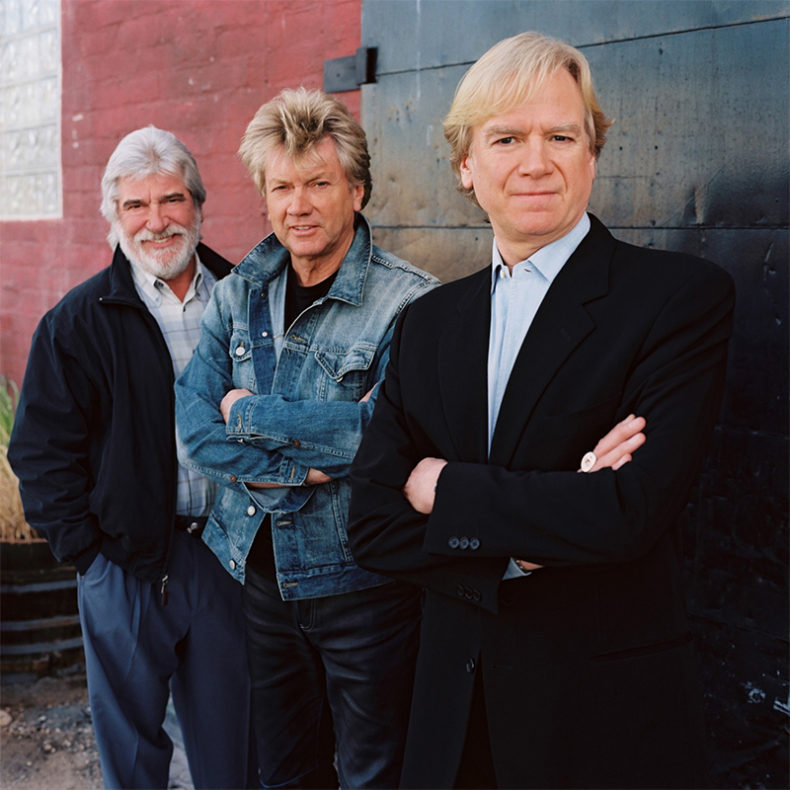 The Moody Blues have been around since 1964.  Of course the line-up changed in 1966 and they became a much bigger band (although their single “Go Now”, with the original line-up did make top ten around the world).  It was when Justin Hayward and John Lodge joined the band after the departure of Clint Warwick, and Denny Laine (Laine would go on to success with Wings) that the band regrouped and changed their sound from a rhythm and blues band to a prog-rock band.  Their first success came in 1967 with the release of Days of Future Past (their second album).

Days of Future Past quickly became a worldwide phenomenon and now considered a classic.  In honour of the 50th anniversary of the album, The Moody Blues have taken to the road to perform the album in its completion with a live symphony orchestra.  That show hit Toronto for two shows at the The Sony Centre, July 6 and 7.  This writer caught the first of the two shows.

The Moody Blues are now down to a trio: Graeme Edge (drums and  the only member from the original 1964 band), John Lodge (bass and vocals) and of course, Justin Hayward (vocals and guitar).  They had help: Norda Mullen (flute, guitar and backing vocals); Julie Ragins (keyboards, guitar, saxophone and backing vocals); Alan Hewitt (keyboards and backing vocals); and  Billy Ashbaugh (drums).  Excellent players who have toured with the band and Hayward solo for may years.

The show was organized into two sets.  The first set was an hour of their greatest hits and a few album cuts.  The band was tight, and Hayward and Lodges vocals were as good as ever.  They sounded like The Moody Blues.  Fans certainly enjoyed the set.  There were a couple of surprises, such as “Nervous” (a John Lodge song from Long Distance Voyager – 1981), “Say It With Love” (from Keys of the Kingdom – 1991) and my personal favourite “Steppin’ In A Slide Zone” (from Octave – 1978).  But they stuck to the hits (“Gemini Dream”, “Isn’t Life Strange” and “Your Wildest Dreams”).  The band had a large screen behind them where they were able to have projections to accompany the music.  It was a great set and all too soon they left the stage.

After a 30 minute intermission, they returned with an orchestra and the moment that the fans had been waiting for began.  The orchestra started playing “The Day Begins” and on the large screen visuals accompanied the music.  Jeremy Irons made a surprise appearance on the screen with the poetry introduction (he returned at the end as well).  This was somewhat disappointing as I have seen The Moody Blues and Edge has always recited the poetry.  Irons, however did a wonderful job.  And the audience and the band was off in a time warp back to 1967.

It was brilliant.  The band played perfectly with the orchestra and the vocals, maybe not as youthful as they were in 1967, still sounded fantastic.  It was well arranged and extremely well executed.  Of course, this is not the first time the band has performed with an orchestra, but to my ears they have never sounded better.  The audience certainly agreed as each song was met with a standing ovation. I don’t know if there was a dry eye in the house when they ended the set with “Nights in White Satin” (the only changed they made from the album, putting it last, rather than “Late Lament/Resolvement” which they played as an introduction to “Nights In White Satin”, a change they have done for years in concert).

The band came on for two encores (“Question” and a rocking “Ride My See Saw”). It was exactly what one would expect from the show.  The Moody Blues delivered what they promised.  Fans were certainly not disappointed.  Predictable show?  Maybe, but so what.  It was two hours of great music played by extremely talented musicians.  Both the band and the orchestra delivered and they complimented each other.

A great summer night in Toronto, made even better by a classic rock band.  Really, the night was perfect.

Born and raised in Whitby, Aaron discovered music through his love of The Beatles. This led to a career in radio, writing for various publications, and ultimately a radio show about The Beatles (Beatles Universe), which ran for over four years. When not immersed in music, Aaron enjoys spending time with the loves of his life -- his wife Andrea, and daughters Emily and Linda (all of whom have an intense love of music too).
RELATED ARTICLES
john lodgejustin haywardlive review
7.0

by Bryan Williston on October 3, 2018
10,000 LIGHT YEARS AGO A CONVERSATION WITH JOHN LODGE OF THE MOODY BLUES “I was never really interested in music. It was really strange. We used [...]

by Judi Cuervo on April 12, 2018
CRUISE TO THE EDGE A PROG ROCK FESTIVAL AT SEA? YES!!! If there was one album that defined my teen years, it would have to be Close to the Edge.  Little did I dream [...]