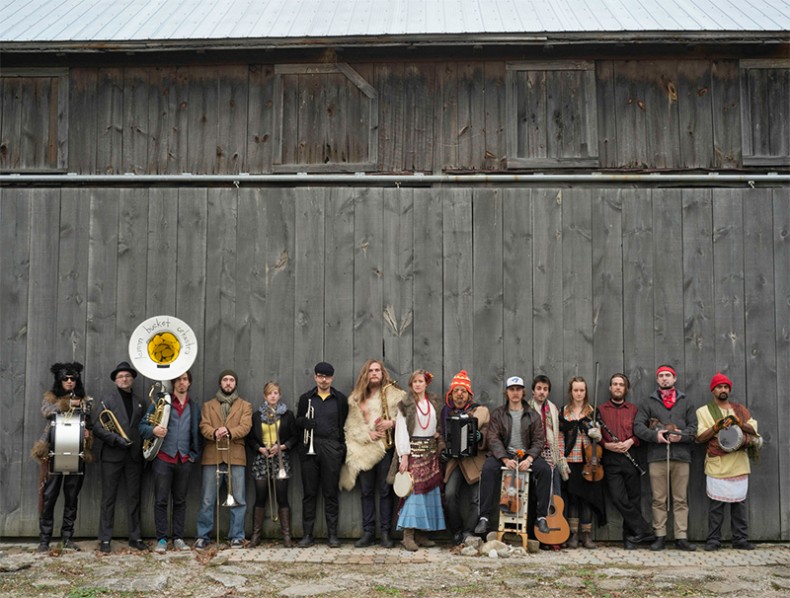 The Opera House is just another concert hall, but with a better layout than most. Same three bars aggressively surrounding the audience, but better stocked than most. It’s been a while, Opera House… I kind of like you now. Tonight the bars are lined with incredibly tall women and solemn-faced men. Tonight is a night for those with Gypsy roots, with a yearning for home and a connection to the past and the present of Eastern Europe.

There could not be a better place to witness a cacophony of horns and traditional instruments played untraditionally. I am here for “BRASH! A Badass Brass Festival,” and badass it is. The show opens with what appears to be an indoor parade, and the floor quickly goes from sparse to packed-like-sardines. This is the Detroit Party Marching Band, a 21-piece brass and percussion outfit that can slay crowds with zero amplification. Granted they have plenty of ammo due to their numbers and incredible volume, but it’s the song structure, theatrics and enthusiasm that really pulls in the crowd. The whole band would fall on the floor, playing dead as they continue to play melancholic melodies, only to build up back to life and amp their audience up to the max.

Next up comes the legendary The Shuffle Demons, best known for their late ‘80s hit “Spadina Bus.” Well they’re still at it. The demons did not disappoint, with crazy showmanship and energy, and of course, excellent horn playing. Sunglasses on, painted suits and King Tut adornment on, The Shuffle Demons did what they do best: got the room bumping with an awesome combination of funk, jazz and white-ass rap. It’s just plain fucking fun. That’s why these guys are still playing great gigs, with only one hit song that few of us remember.

After another impressive performance from the Detroit Party Marching Band, headliners Lemon Bucket Orkestra blast into their set. A wondrous mix of accordions, marching drums and brass horns, both audience and floor oscillate with the synchronized jumping of band and audience. The gypsy beats are infectious, and give the audience the stamina of a Cossack. Although I can’t understand the language, Mark Marczyk puts across an energy and a sense of story-telling that keeps me engaged. A super-eclectic mix of Ukrainian, Russian, Serbian, Roma, Romanian, Macedonian, Hungarian, Bulgarian and sometimes Turkish; the music of Lemon Bucket Orkestra transcends language.

There is great showmanship from all members of the band, but without most of the pretentions I’ve seen in other “party” bands. Marczyk and his violin are on a mission, and the other talented members of this very large band are there to support him, as are the members of the audience. The ones who know, sing along and celebrate without holding back. The band’s arrangements are designed to take you on a journey, sometimes sad and sometimes overwhelmingly joyful, not unlike the culture and countries it originated from.

James Stefanuk has an unbridled passion for good original music. He has been involved in the Toronto Indie scene for over a decade, and currently fronts the Alt-Blues band 'Jim Dan Dee'. In his spare time James plays with his Australian Shepherd 'Indie', drinks bourbon on the rocks and writes about himself in the third person.
RELATED ARTICLES
lemon bucket orkestralive reviewthe opera house

by Talia Wooldridge on November 3, 2017
Lemon Bucket Orkestra If I Had The Strength Outside Music “We start in a musty train car overlooking the fields and valleys of our youth through permanently smudged windows, [...]