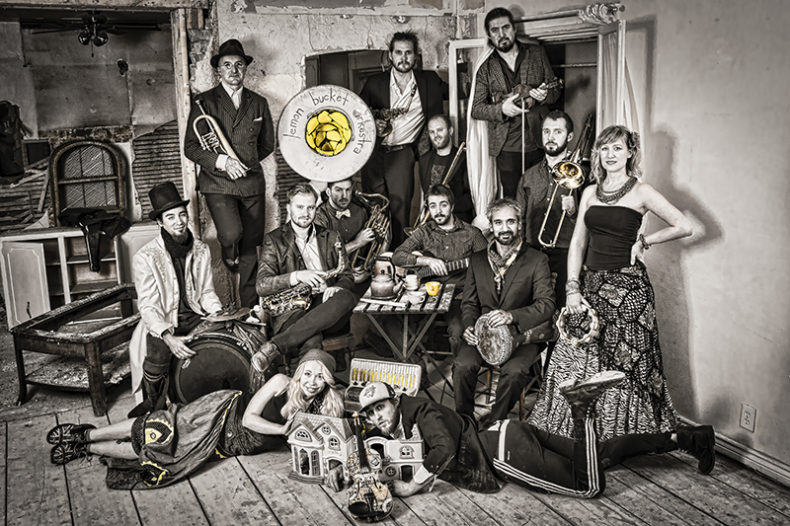 THE HEALING POWER OF MUSIC

AN INTERVIEW WITH MARK MARCZYK OF LEMON BUCKET ORKESTRA

An infectious act by Toronto’s gifted Soul Motivators opened the rambunctious Balkan-klezmer-gypsy-party-funk-super-New-Years party on New Years Eve, featuring Lemon Bucket Orkestra. They graced the Opera House stage to bid adieu to a stressful 2016 and had the entire venue singing “Sholem”, a song that calls for peace. It was a beautiful and meaningful way to usher in 2017, bringing community and calling for peace in the New Year.

Mark Marczyk, one of the band’s founders, explains how Lemon Bucket Orkestra worked on a special arrangement of “Sholem” to match the rising tension experienced in 2016. They posted the traditional folk song lyrics on their website and the event page so that people could sing along. 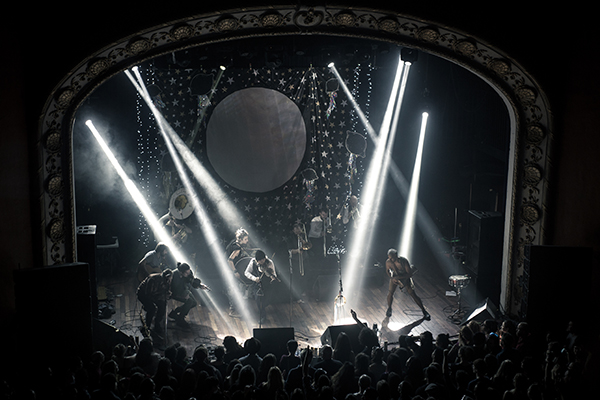 “One piece is 45 minutes in length and is based on a traditional folk song, an old Russian prison song,” Marczyk says. “The lyrics are about a guy who is coming home from his own prison and war and he is invoking his mother, saying, ‘don’t expect me to come back your same little boy that I was yesterday, life’s mind has sucked me dry and I am an eternal game’. Each verse is about how this trauma has changed this man,” Marczyk continues. “Rather than having it as one song on the album, we decided to split up those different verses and have the entire album be this man’s journey on the train as he goes home to his mother.”

“We have a fraught relationship with looking back to the past and then looking forward to finding new ways to expressing this music,” he continues. “There’s a simultaneous wish to dive into the tradition of the music and play it respectfully, but also bringing it into the 21st century, making it a way for people to celebrate with us. This album is going to be like that. We’re trying to figure out how we tell the largest story and express all that this music expresses. Including the history and the place that the music comes from. How do we express Eastern Europe as Canadians who have been affected by Eastern Europe?” 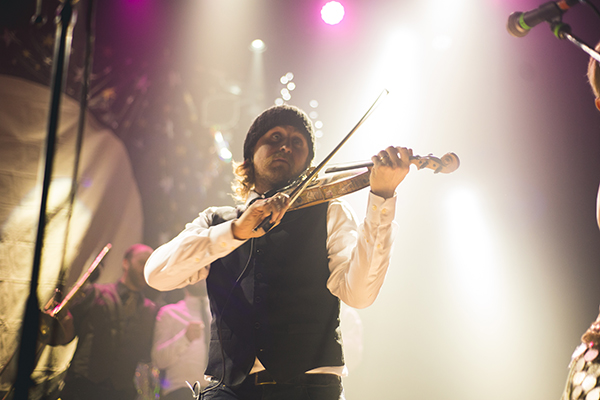 Lemon Bucket Orkestra is renowned across the world for forging community through music. Since their raucous, fun, and impromptu first concert in 2008 at the original La Palette on Augusta Avenue in Toronto’s Kensington Market, the musical act has grown and evolved with various band members over the years, but Marczyk and Michael have always been at its core.

The group’s music is that of reimagining Eastern European folk songs. Marczyk’s violin chops actually blossomed and formed during his stay in the Ukraine over ten years ago. Captivated by local street musicians in Kiev, Marczyk formed a friendship with these musicians, who encouraged him to play with them. He relearned the violin and returned to Canada, inspired from the joy that came in music making with his new friends. He brought that spirit back to Toronto and wandered into the popular bar, The Communist’s Daughter.

“After last call, Michael (behind the bar) picked up his trumpet and started to play.” Marczyk says. The two got to talking, sharing Serbian music and drinking until morning. Later, Michael would introduce Marczyk to some musicians that led to more introductions to musicians from different walks of life and genres. This energy of community and musical celebration was infused in Lemon Bucket Orkestra.

The musical styles, like the name, come from a song from Odessa that translates into “little lemons”. “It’s a gangster song about two guys bragging about whose lemon trees grow the most lemons and earn the most money,” Marczyk explains. “I really liked that confidence and bragging, as I find it lacking in folk music. People are always apologizing in folk music. So, we wanted that kind of rock and roll, in-your-face punk aesthetic. And the bucket is a symbol to throwing money in the bucket, like we’d do as street performers.” 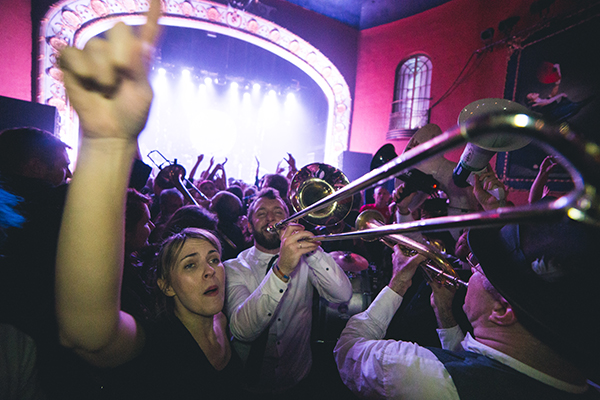 The braggadocio referred to in the ‘gangsta’ folk song that inspired LBO’s name is definitely absent in the concerts, save, perhaps, a duel over whose solo can get the crowd the most excited.

“People were open to meeting other people who were looking for something musically, but I don’t think anyone knew what they were looking for until this happened,” Marczyk says. “People came in and, for the most part, jumped into a style of music they had no experience with and jump in and give all of their being to expressing and exploring what were the different ways we can connect and celebrate with our audience. This is a huge part of traditional folk music.

“Art is made as a form of communication and to express not only what is inside of us but to connect with others,” he continues. “So we made our band and concerts and everything that we do to include everyone in the audience as much as possible.”

I ask Marczyk to sum up what Lemon Bucket Orkestra is about in a few words. “Celebrating humanity,” he says after a pause. “Celebration doesn’t only mean joy and celebration, but also sadness and anger. Humanity includes all of us here.”

Lemon Bucket Orkestra has, arguably, transformed the performance aesthetic in Toronto. From pop-up street concerts with Toronto’s blackout parade to performing bar-top at La Pallette on Queen Street West, Lemon Bucket Orkestra has razed the spirits of many Torontonians, who often complain of the conservatism and stuffiness throughout the 6ix. Not so at a Lemon Bucket Orkestra concert. You will be on your feet and swinging around in a circle, high-fiving your neighbours and encircling massive painted brass instruments. 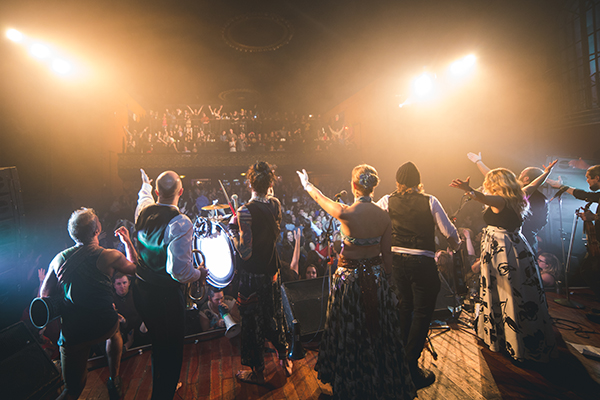 Many Lemon Bucket Orkestra fans are anticipating the album in November. The band and their creative theatre project Counting Sheep, a folk opera, will be touring throughout Canada, the USA, UK, Finland, Germany, and Australia.

“Our main goal is to celebrate humanity and all the different elements. Celebration is something that is multifaceted and really important to us. Humanity is also multisided. To celebrate our humanity and to better comprehend and bring out the brightest side of our humanity.”

The joy of humanity is in celebration – its ups and downs and mundane moments. To be able to share these moments, with 350 of your closest new friends on New Years Eve, is revolutionary. Marczyk agrees.

“This year we’re really looking forward to connecting even more with the power of music and art to both heal and consolidate our feelings and our desire to create change in the world. We had a crazy year in 2016 and it was hard for many. So this year, the only way that we can step out of that is if there is a collective desire to make 2017 what 2016 was not,” Marczyk says. “From the creative and musical perspective we hope that people will come and use us – our music and art – to jumpstart that change. We’re here to be used.”

Talia Wooldridge is an avid music lover, composer and ethnomusicologist who contributes artist interviews, live concerts, festivals and album reviews for Spill Magazine. She has written extensively on the intersection of music, personal identity and cultural symbolism with an early focus on Latin American Hip Hop and female Cuban rappers. In her spare time, Talia writes, composes music and manages Music Can Heal, a non-profit that brings live, award-winning musicians to inspire healing in hospitals, hospices and communities in need. Her next project is an interactive music-travelogue exploring music cultures and music travel around the globe. Follow her here: www.taliawooldridge.com + www.movetoyourownbeat.com.
RELATED ARTICLES
featureslemon bucket orkestra