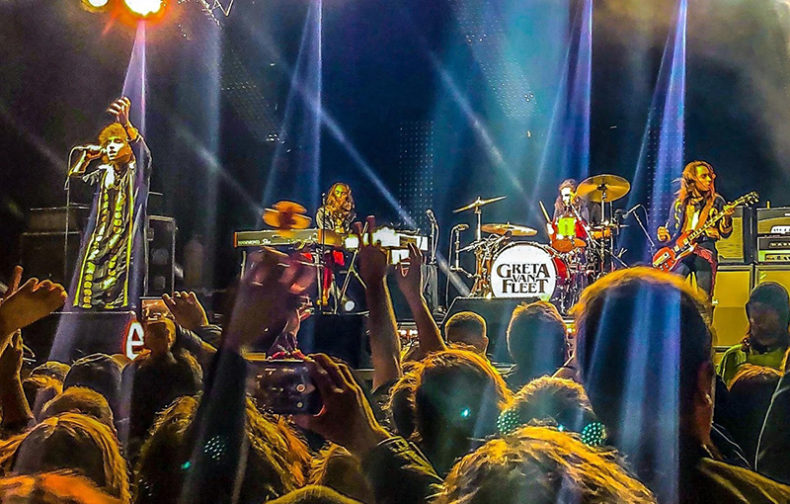 Greta Van Fleet’s second show in as many nights proved to be a complete success for the band and for their Canadian audience as both shows were sold out. Echo Beach offered an open, festival-oriented ambience with a non-threatening cloud cover.  It was a comfortable 15 degrees celsius upon the sandy-floored open air venue. The setting was perfect, and the 5,000 strong crowd was quite amicable.

Inside Echo Beach, the husband and wife duet of Ida Mae opened the musical event as Chris Turpin sang with his effects-laden dobro. He was augmented by Stephanie Jean’s complementary voice as she added some enhancing percussion with her tambourine. They offered soulful renditions of their songs “Reaching” and “Boom Boom Boom” from their “Chasing Lights” album. Their deep, dark and haunting rendition of “Ohio” by Neil Young was a real crowd-pleaser. They put all of their energy and body language into delivering their soulful blues and although their stage presence was limited, they shared intepersonally and interactively with the audience, who were eagerly receptive. They hail from London, England where, as Turpin states, “they were playing in front of crowds of 50 people.”  Their unified love for American roots blues music brought them residence in Nashville as they travelled the deep south. Turpin at times showed evidence of a young Joe Bonamassa in his vocal delivery and in his playing style. The duo was always interconnected and at the right times they shared melodic harmonies.

The gathering ramped up another level at the sight of Greta Van Fleet entering the stage. If the crowd wasn’t already on their feet in this general admission setting, well then, they would have been. From upstage left, lead singer Josh Kiszka led the way with a bouquet of white flowers that he immediately shared with the audience. His gesture automatically warmed the crowd and set the vibe to his liking as the audience seemed malleable to him for the rest of the night. Kiszka’s attire of a black floral sherwani-type garment with twin brother Jake Kiszka donning a sharp flamenco/matador ensemble indicated they spared no expense in following suit with the advice given to them by Sir Elton John. 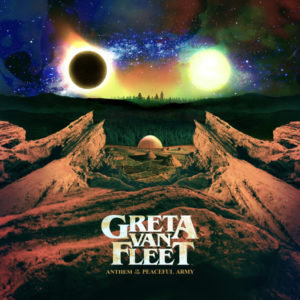 The first down note out of guitarist Jake Kiszka on his cherry-coloured Gibson SG led this gathering into their opening song “The Cold Wind”.  Josh Kiszka’s vocals were spot on, delivering an energy that immediately lifted the atmosphere to a higher energy. The sound at this concert was fantastic. The band then performed an energetic deliverance of “Highway Tune”. The stage presence was more inviting than commanding as they naturally fed off of each other. After performing “Black Smoke Rising” the band flowed nicely into a rocking rendition of the Willie Dixon blues number “Evil”, a song made famous by Howlin’ Wolf. It was another opportunity for the crowd to show an appreciation for the blues as indicated so favourably during the first act. Josh Kiszka, ever the showman, brought the tempo and the mood to a more tranquil vibe as bassist Sam Kiszka stealthily made his way to the keyboards for their song “Flower Power”. Their rendition of “Watch Me” made known by the artist Labi Siffre and John Denver’s “The Music is You” fit well into their repertoire as everyone then sang along with  “You’re the One”.

Sam Kiszka then lit a stick of incense at the keyboard before the band performed the most prog/psychedelic-infused rendition of their song “Age of Man”. Jake Kiszka took this opportunity to display his magnificent guitar work with his use of note progression, timing, and use of negative space, demonstrating it as an art within itself. He certainly did some shredding during “Black Flag Exposition” as his solos were again skilled with great in and out timing. He truly played like a veteran axeman. Their next number “Watching Over” carried within this very same resonance. Their closing piece brought them to their arena rock song “When the Curtain Falls” as lead vocalist Josh Kiszka would exude his fun loving disposition to the audience. The crowd then raised decibels louder than the band themselves while calling the band out for an encore performance and Greta Van Fleet responded with “Safari Song” giving drummer Danny Wagner the opportunity to display his skills on his solid-sounding Ludwig kit. As the band waved their goodbyes to the appreciative crowd, their body language made it clear that they had left everything on the stage. They sounded very close to their recordings while performing flawless extended versions of their songs, enhancing the live experience.

Everyone left with smiles and feeling fulfilled, realizing their fortunate opportunity to see this up and coming group in such quaint setting. An opportunity like this may not come up again for these fans because the next time GVF comes to this fine city, a larger venue is likely to be the setting. (Thank you, Chloe, for contributing photos.)

David is an avid fan and strong advocate of live vocal and instrumental music. The local act, the artist on the big stage and every act in between will tweak his interest. Every city has a vibrant music scene which is an integral part of acclimatization. The highly active Toronto music scene always offers new discoveries.
RELATED ARTICLES
anthem of the peaceful armygreta van fleetlive review
8.0

by Gerrod Harris on October 19, 2018
Greta Van Fleet Anthem Of The Peaceful Army Republic Records While 2017 was the year Greta Van Fleet popped onto everyone’s radar with the strong release of their debut [...]