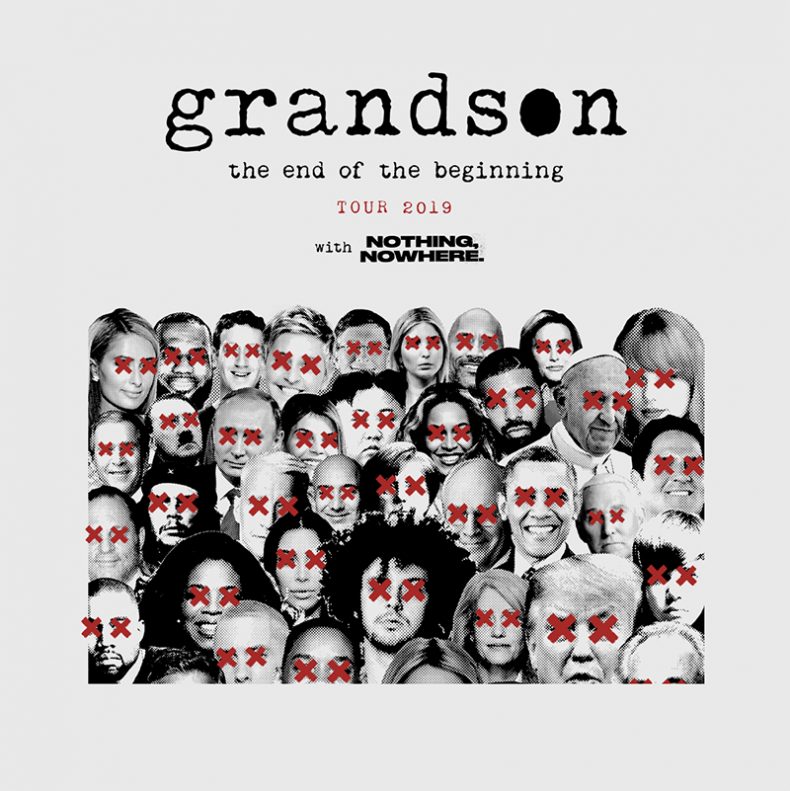 The first show on Grandson’s “The End of the Beginning” tour in support of the release of A Modern Tragedy Vol. 3. took place tonight at the iconic First Avenue, opened by Nothing Nowhere.

Nothing Nowhere’s half hour set of 10 songs included tracks “Destruction” and “True Love” off their EP, Bloodlust, a collaboration with Travis Barker of Blink 182. The crowd swayed and bobbed their heads while many in the front row sang along. It had been approximately three years since they had played a show there, and by reaction from the crowd, it was long overdue.

The Grandson’s fans, known as Grandkids, began chanting “Grandson!”10 minutes before he took the stage, but once the lights went out the crowd instantly went quiet. The big screens flashed with graphics of public figures with large X’s over their eyes (Grandson’s trademark). The musicians took the stage one by one, the crowd cheering.

“Oh No” began and Grandson started singing “There’s smoke in the sky again,”. The single had been out for a week, but everyone already knew the words.

A few songs later security was preoccupied by someone in the crowd. It was difficult to see what the issue was, but Grandson was aware of it and decided to address it.

“Look, I know you’re navigating these feelings of confusion and frustration, that we are all feeling,” he gestured to his bandmates,“so please be respectful – and don’t mess with these women for the rest of the night.”The crowd cheered.  “We want you to feel comfortable here.”

The show resumed with “Apologize” and “Overdose.” Hundreds of people yelled the lyrics, threw their hands in the air, clapped, jumped in unison, or were in the small circle pit.

Grandson paused to address the crowd: ‘Before we go any farther, I feel that it would be irresponsible to not at least acknowledge what this project is all about. It’s about you feeling that the shit that you’re dealing with . . .just not politically. . . but personally, and socially. . . is not set in stone. There are people that are less smart and courageous than you that have built this shit up, and people just as strong as you are able to tear it down!’  The crowd roared in agreement.

The final song was “Blood//Water”. The room was in a frenzy and security was busy with body surfers. Grandson jumped down from the stage, then quickly pulled himself back up, shirtless.  The crowd jumped and clapped in unison until the last final notes rang out. “Thank you so much!”, he yelled. Deafening cheers filled the venue.

And just as fast as they had come in, the crowd spilled outside. Grandson made his way to the merchandise table where he took photos and chatted with fans.

It was a high energy show from start to finish with an amazing feeling of camaraderie.

Trista’s a music addict who’s taste in music spans over numerous genres. She enjoys playing her bass guitar, but honestly she’s not very good at it. So she goes to concerts and watches real musicians who are far more talented than her. You’ll find her there in the front row, because, well, she’s short and wouldn’t be able to see the stage very well otherwise, and because she strives to get the perfect photo to capture the experience.
RELATED ARTICLES
first avenuegrandsonlive review